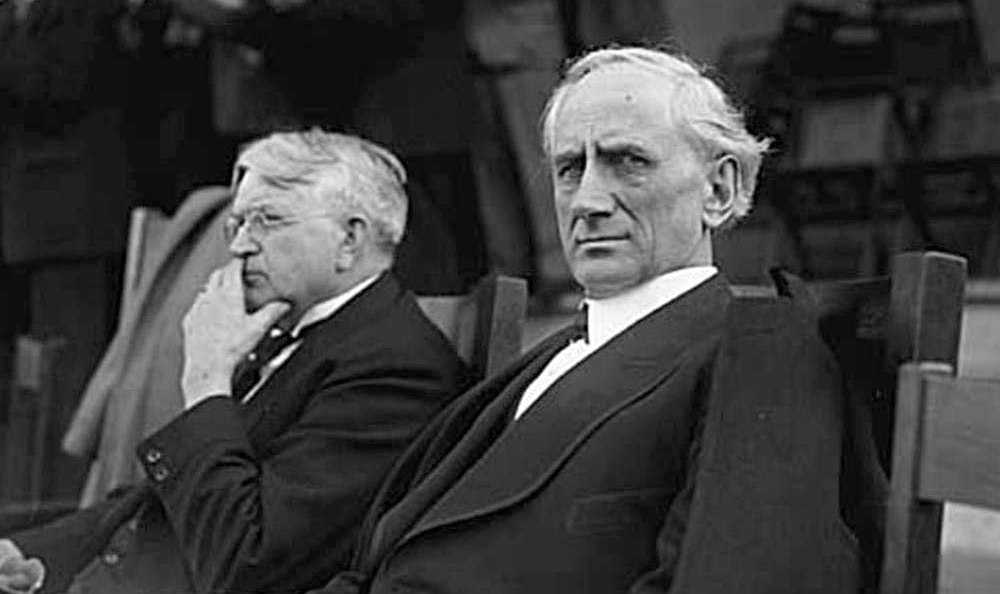 The Reverend Mark Matthews began his long and influential Seattle pastorate of the First Presbyterian Church on January 1, 1902.  He was an outsized figure who played an outsized role in the city’s growing up.

Matthews was raised in Calhoun, Georgia and remembered his father’s stories about General William Tecumseh Sherman’s troops burning the family’s carriage shop and home during the Civil War.  He grew up to be a fiery preacher.

Seattle’s Denny Park holds a bust of Matthews – the only public Seattle monument to a cleric – with the inscription: “Preacher of the Word of God and Friend of Man.”  In fact, his preaching reached far beyond the religious realm.  There were few matters in our post-Alaska Gold Rush town of 80,000 that failed to inspire Doctor Matthews.  He railed about the “blood-stained dollar,” asked his parishioners to “kill sin,” and titled one of his sermons “Soap, Soup, Salve, and Salvation.”

Most Seattle residents at the turn of the century believed that their city, especially the tenderloin of Pioneer Square, needed a social and moral makeover.  From 1910 to 1918 Matthews was their champion. From his pulpit he tweaked Mayor Hiram Gill about the city’s gambling houses, whiskey purveyors, and brothels.  In this book, My Life in Prin,  Emmett Watson called Matthews “Seattle’s Moral Majority.”  Murray Morgan, author of Skid Road, described Matthews as “pure and publicity-minded.”  Henry Broderick in his book, The HB Story and Seattle’s Yesterdays, noted the Reverend’s “Messianic ardor.”

For spectators, the Gill-Matthews wrangle was a great show.  Both men were colorful orators and did not shrink from landing a punch or two.  Physically, the two gladiators were a spectacle to behold: Hi Gill sported a corncob pipe, wore old suits and floppy hats; Matthews was tall, lanky, and always dressed in black.  They were both lawyers and each could count on avid followers.

It would be fair to say that the battle ended in a draw.  Mayor Gill lost a recall election but was re-elected four years later.  Gill kept the town wide open; Matthews filled his church every Sunday. The two sides of Seattle – sin with its tax receipts, and sanctimony with its middle class respectability – were the two sides of the early city.

The Reverend Matthews buried my grandmother in 1926 and I often sit on a pew in my dining area that I salvaged from his old First Hill church.  Hi Gill’s home was at 626 35th Avenue in the Madrona neighborhood, several blocks from my previous residence.

The clash of these titans marked a watershed in Seattle’s growth.  During the early 1900s the noisy bachelor town near the waterfront and Skid Road was fading.  Families and great homes on First Hill and Capitol Hill were emerging.

The reincarnation of Mark Matthews’ First Presbyterian Church until recently thrived as a “downtown” presence at Seventh Avenue and University Street.  When Doctor Matthews was running things it had a membership of 9,000 – laying claim to being the largest Presbyterian congregation in the world.  Matthews’ energy and leadership led the way in fighting tuberculosis and establishing the city’s first kindergarten, day nursery, and juvenile court.  Those efforts are often overlooked because of his noisy crusades against bootleggers and the “tolerance” policies of city officials.

The Reverend Matthews died on February 5, 1940.  He was 72 years old and had held the influential Seattle pastorate for 38 years.  Two years after his death, following the Japanese attack on Pearl Harbor, the city changed forever.  Had Matthews lived another two years one wonders what he might have thought as the founder and supporter of a Japanese branch of Seattle’s First Presbyterian Church.

The old church itself has declined from its days of glory. It has been immersed in a legal wrangle with the Seattle Presbytery for several years.  The property is likely worth over $20 million, which has caused members, pastors, and the Presbytery to claim ownership of the property on First Hill, where hospitals and new residential towers are blossoming.

One visitor wrote that “First Pres” is dying because of “good intentions gone wrong,” citing the building’s “low-bar entry shelter” for the poor and homeless.  He cited the fact that “guests” and visitors can arrive under the influence with friends and animals in tow.

Court decisions have blurred the ownership issue, members drifted elsewhere, and the last pastors have departed.  The sturdy sanctuary, chapel, and support buildings remain a full-block real estate target close to downtown Seattle and rich with westward views.  Reverend Matthews would likely be appalled at this outcome in his church’s history.

Junius Rochester
Junius Rochester, whose family has shaped the city for many generations, is an award-winning Northwest historian and author of numerous books about Seattle and other places.
Previous article
Abortion Rights: Senator Murray Re-energized
Next article
Washington’s Disappearing Lawmakers