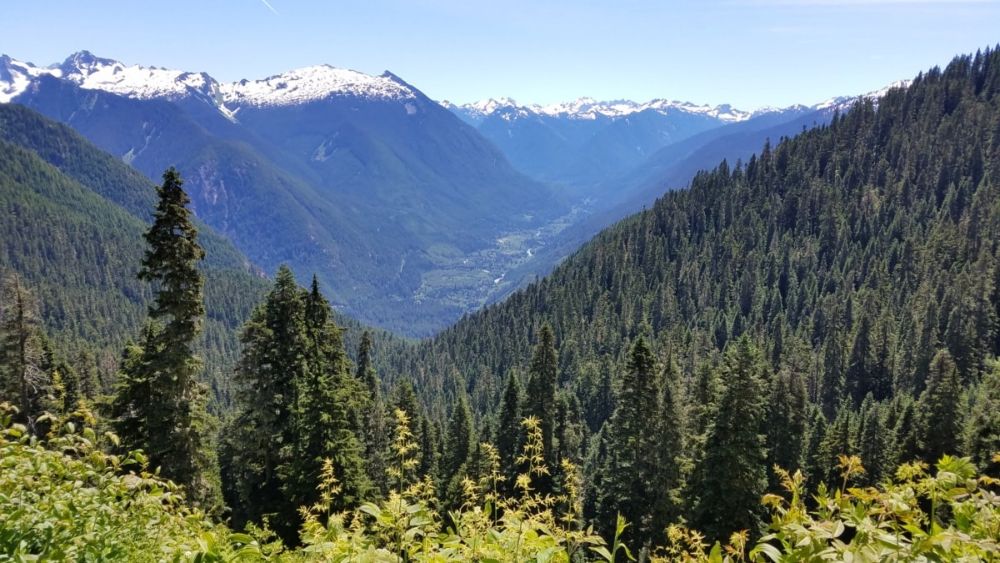 After long and cloudy days, we can again see the Olympic Mountains.  As I gaze westward at the range, I like to conjure up a rugged contingent of Euro-American pioneers (after settlement by Native Americans 12,000 years ago), who began to trickle in during the 1860s-1880s.  Heavy rains, dense forests, wild unmapped terrain, and isolation discouraged many interlopers, but opportunities to farm, fish, log and dig mines attracted a steady stream of independent characters. The peninsula is — 150+ years later — still in many ways an untamed and mysterious land.

Other than wonderful, frightening Indian legends within the Peninsula’s mysterious interior – Gods, Goblins or Thunderbirds – little was known about this ancient barrier between the Salish Sea and the Pacific Ocean.  Shards of information leaked from the first organized exploration of the interior by Lt. Joseph P. O’Neil in 1885, who gave it another try in 1890.

In 1889, the five-person Press Expedition (named for the Seattle Press, a statewide newspaper), led by James Christie, crossed the Peninsula from the Elwha River to the Quinault Valley.  Years ago, during the month of August, my friend Dave Haley and I followed the old Press trail for nine days.  We caught Brown trout every day, encountered a large herd of Roosevelt elk, AND woke up to only one frosty morning. WE polished off a flask of brandy within the first four days of our adventure.

On November 6, 1889, James Christie of North Yakima, Washington, wrote a letter to the Seattle Press noting that the Olympic Peninsula “had never been trodden by the foot of a white man.”  Asking the Press to consider supporting an exploration of this unknown country, he described his long experience as an explorer of “the Canadian Rockies clear to the Arctic Circle.”  When Christie was invited to Seattle, he arrived in hunting garb, holding a rifle, sporting long hair bound with an Indian-style headband, and holding a leash pulled by two large tugging dogs.  Talk about Central Casting!

Christie hired several woodsmen friends, as W.E. Bailey, publisher of the Press, told him to gather provisions at the newspaper’s expense.  After disembarking the steamer Ferndale at Port Angeles, the six-man party entered the mouth of the Elwha River – called the “high road” into the Peninsula interior.  A hand-crafted river boat made some progress, but the party’s two mules, Jenny and Dollie, took over the supply burden after the party encountered an array of wild rapids, boulders, and fallen trees.  They heard geyser noises, shot a cow elk, encountered Indian-fashioned blazed trees, landslides, snow, and spectacular views.  Following the Quinault River westward, they arrived in Aberdeen looking like wild men.  Seattle and the Press welcomed the tired party six months after it had entered the mysterious Peninsula.

Official recognition of this precious natural resource and last frontier occurred when President Grover Cleveland created the Olympic Forest Reserve in 1897.  Our first “conservationist” president, Theodore Roosevelt, designated a portion of the Reserve as a National Monument in 1909.  A 1938 touch to this political drama took place when President Franklin D. Roosevelt created Olympic National Park.  FDR stayed overnight at the dramatic Lake Crescent and had lunch at Lake Quinault Lodge.

Since those early political milestones, a coastal strip was added to the Park in 1953. In 1976 the Park became a “Man and the Biosphere Reserve,” and in 1981 this area was designated a World Heritage Park.

Several early Olympic Peninsula pioneers earned reputations for beating the odds of survival. One example is tall, sandy-haired Victor Smith, who arrived in Port Townsend in 1861 as Collector of Customs.  Accused of moving the Customs House from Port Townsend to Port Angeles, he found himself vilified by Port Townsend residents and celebrated by Port Angelenos. The Ander and Joanna Nylund family, Finnish immigrants, ignored relentless rain (145 to 190 inches a year in some areas) while establishing a farm at Lake Ozette in the 1890s.  Norwegian Lars Ahlstrom homesteaded on the nearby Ozette Prairie. In 1892, John Huelsdonk settled in the Hoh River Valley. After packing a cook stove on his back up the Hoh for his wife Dora, Huelsdonk gained the name “Iron Man of the Hoh.”

One of the Peninsula’s most famous waterways is Hood Canal, named for The Right Honorable Lord Samuel Hood, Captain George Vancouver’s London boss. The canal slices through the eastern reaches of the Peninsula like a curved hunting knife.  The arm’s calm, temperate waters and ITS valleys and streams were settled by early pioneers.  The Canal is home to famous oysters, family resorts, and dedicated boaters.  It sports such enticing names as Lilliwaup, Brinnon, Quilcene, Duckabush, Potlatch, and Hamma Hamma.

On the Peninsula’s western slopes, the Pacific Ocean rolls against Cape Flattery and onto the shores of Makah, Hoh, Quileute, and Quinault tribal land and the earth’s number one temperate rain forest.

Today, forestry, Indian traditions, hiking, fishing, and tourism are the economic foundations for later settlers, but the Olympic Peninsula can be called “untamed,” “the last frontier,” or “far corner.”  Towering over this strange land is Mount Olympus, which rose from the sea 35 million years ago.

Junius Rochester
Junius Rochester, whose family has shaped the city for many generations, is an award-winning Northwest historian and author of numerous books about Seattle and other places.
Previous article
Italy: Arts of, by, and for the People
Next article
Department of Mergers & Acquisitions: A Prescription for Seattle Arts?