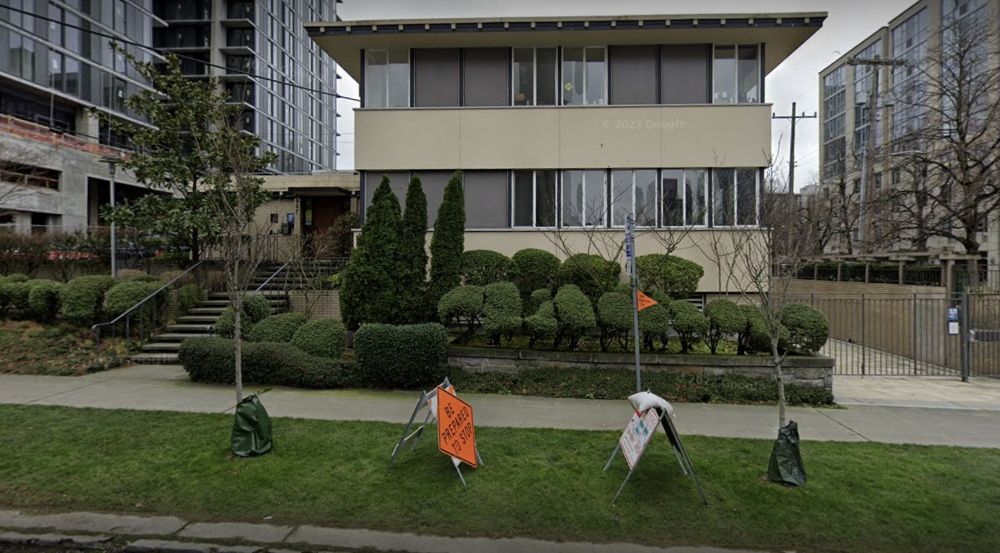 A series of property transactions, involving the Catholic Church and a visionary, Vancouver, B.C.-based land developer promises to both sustain Seattle’s St. James Cathedral (a congregation of which I am a member) and help shape the future of Seattle’s history-rich First Hill.

The cathedral and the Archdiocese of Seattle are doing a series of deals with each other and with the Westbank Corp., characterized by its founder Ian Gillespie as a “culture company,” developer of the 459-unit First Light condominium in Belltown, and – most notably – the vast, $5 billion (Canadian) Oakridge Centre in Vancouver.

Westbank will purchase the building which contains St. James’ pastoral outreach center at 907 Columbia as well as the archdiocesan chancery around the corner at 710 9th Avenue. The Archdiocese will find new digs to consolidate its 125 employees, the site yet to be determined. In turn, St. James will purchase from the Archdiocese two floors of Cathedral Place plus the old chancery building at 907 Terry Avenue, one of the city’s most familiar protest sites.

Westbank will build up to 1,300 “residential homes,” with the exact mix of apartments and condominiums yet to be determined.  In a further project, a Westbank affiliate, Creative Energy, is partnering with Swedish Health Services – an affiliate of Providence Health – to divert excess heat from the hospital’s First Hill campus to an energy-sharing platform. Excess heat from Swedish will become a source of heating for buildings connected to the platform, reducing the carbon footprint of the neighborhood. (Creative Energy supplies heat to 210 buildings in downtown Vancouver and is southern British Columbia’s largest provider of natural gas.)

“Minimizing our impact on the earth is our responsibility as Catholics: Working with sustainability experts like Westbank and Creative Energy will ensure that the redevelopment uses green-building techniques, processes, and materials, while alleviating future environmental impacts with the distinct energy plan,” Archbishop Paul Etienne said in a statement.

In a letter to the St. James community, longtime pastor the Very Rev. Michael Ryan gives his blessing to the deal, saying: “Westbank sees the Cathedral not just as the crowning glory of the First Hill of bygone days but as the heart of the First Hill of the future. I like the thought that the development of the neighborhood will not distract from the Cathedral’s presence but will point to and enhance it.”

The Catholic Church has long been a big presence on First Hill.  St. James has loomed just east of downtown Seattle for more than a century. The church owns 12 buildings over six city blocks including chancery buildings old and new, St. James, O’Dea High School, and Connolly House, the mansion dating from times when Seattle’s archbishop did good but lived well.  As part of the agreement with Westbank, the historic mansion will be preserved, one of four vintage mansions remaining on once-grand First Hill.

The presence of these vintage buildings is being eclipsed, however, as tall residential towers rise on First Hill. “We are now surrounded by tall buildings like St. Patrick’s in New York,” joked Larry Brouse, pastoral assistant and de facto chief operating officer at St. James.

The cathedral needs the money. It will receive $13 million from sale of 907 Columbia and have a “nest egg” of $6.5 million left over after purchase of property from the Archdiocese.  St. James has been operating at a small deficit except in years when the church gets a large bequest.  “We have a structural deficit to maintain our level of services (ministry, social outreach, and liturgical commitments),” said Brouse.

St. James faces major capital expenses to deal with seismic issues from unreinforced masonry structures. Some seismic work was done during cathedral restoration in 1994. But the cathedral faces seven-figure expenses for work on its rectory building.  Hot water needs to be replumbed, and some wiring in the cathedral dates back all the way to 1907.

“There is also the problem of declining church attendance, no secret about that,” said Father Ryan. And there is potential upset in change. A combination old-fashioned Irish priest and thoroughly modern man, Ryan is part of the reason Seattle’s faith community punches above its weight in a secular city. He is a vivid presence in the community, a lucid and popular preacher, activist on social issues, and patron of St. James’ distinguished music program. When the U.S. is going to war, cracking down on immigrants, or nursing social wounds of the latest mass shooting, city pastors have organized marches of 1,000 or more people between St. Mark’s and St. James Cathedrals.

Father Ryan celebrated no fewer than four masses, plus Benediction, on Christmas Day as well as the cathedral’s popular Christmas Eve children’s mass.  “It goes with the job,” he joked. Still, the time will come, in Ryan’s words, when he will “hang it up.” The “iron man” of the Archdiocese has been cathedral pastor for more than 30 years.  Ryan was ordained during the Second Vatican Council of the early 1960s.

What will First Hill be getting? The planned development by Westbank can potentially generate more than $25 million for the City of Seattle’s Mandatory Housing Affordability Fund. The money is made available to low-income and affordable housing builders.  Catholic Housing Services is a big provider of such housing in the city, and already operates Cathedral Place Apartments and Ozanam House on First Hill.

“What everyone wants to see is workforce housing,” said Brouse. “We want to see housing for those who work at Swedish or teach at O’Dea – they ought to be able to live here.”

Described in a Bloomberg profile as “the most vilified developer in Vancouver,” Gillespie is not known as a glad-hander or patient man.  He gazed out his office window at the city’s forest of glass towers and declared, “We’ve risen to a high level of mediocrity. Three quarters of the buildings in this city look like a piece of shit.”

But not his buildings. Drive into Vancouver on the Granville Bridge and witness the 59-story, gravity-defying Vancouver House, which twists and expands skyward from a small lot just west of the bridge. An architect of much-admired Westbank properties in Vancouver, James K.M. Cheng, is doing the First Light project in Belltown. A Pilchuck Glass-trained artist, John Hogan, is working on its distinctive light-drawing, light-enhancing outer glass.

The 28.5-acre Oakridge Centre project in Vancouver, equivalent in size to New York’s Hudson Yards, is slated for completion in 2027. It features glass-canopied towers surrounding a forested seven-acre park with a shopping mall beneath the park.  Other features: the city’s largest daycare center, concert venues, public art, and the training center of the Goh Ballet Company. Not cheap:  A 450-square foot unit will set you back $600,000.

Westbank is already making its mark on First Hill, with two leaning, art-themed 33-story residential towers, designed by the admired Chicago firm of Perkins&Will, under development across from the Frye Art Museum, and two proposed towers at Stewart & Denny with plans for the 250-long reassembled fuselage of a Boeing 747 hanging 15 feet off the ground above the planned galleria.

Keep in mind that Westbank has been one of Vancouver’s leading builders of affordable housing. Oakridge includes 290 subsidized and 290 rental units out of 2,500 total, topping the city’s 20 percent affordable housing mandate in new neighborhoods.

At St. James, Ryan and Brouse are seeing visuals in which Westbank promises lots of wood on the exterior and green befitting a project friendly to the earth, plus in Brouse’s words “stained glass as a homage to the cathedral across the street.”

In Gillespie’s words, “Our initiative will create low-carbon housing, infrastructure, and amenities that will serve Seattle for generations to come: We’re looking forward to continuing our work with the Archdiocese of Seattle and the team at Swedish Health Services, to not only contribute to the long-term viability of this community but to help First Hill significantly reduce its carbon footprint and demonstrate leadership globally in responding to climate change.”

High soundings from a guy whose firm has $50 billion worth of projects completed or in the works, whose upscale properties are celebrated in a 629-page book called “Fight for Beauty,” and advertised in first class cabins of aircraft crossing the Pacific.

As a St. James parishioner, I want my fellow churchgoers and the teachers across at O’Dea to afford to live where the pastoral outreach center now sits. As one capably cared for at Swedish this winter, I hope to see tired staff able to walk 3-4 blocks home at the end of a workday.

Joel Connelly
I worked for Seattle Post-Intelligencer from 1973 until it ceased print publication in 2009, and SeattlePI.com from 2009 to 6/30/2020. During that time, I wrote about 9 presidential races, 11 Canadian and British Columbia elections‎, four doomed WPPSS nuclear plants, six Washington wilderness battles, creation of two national Monuments (Hanford Reach and San Juan Islands), a 104 million acre Alaska Lands Act, plus the Columbia Gorge National Scenic Area.
Previous article
We Regret the Error: 100 Years of Seattle Times Editorials
Next article
The Midterms Are Shaping Up to Be a Bloodbath. It’s Seattle’s Fault.