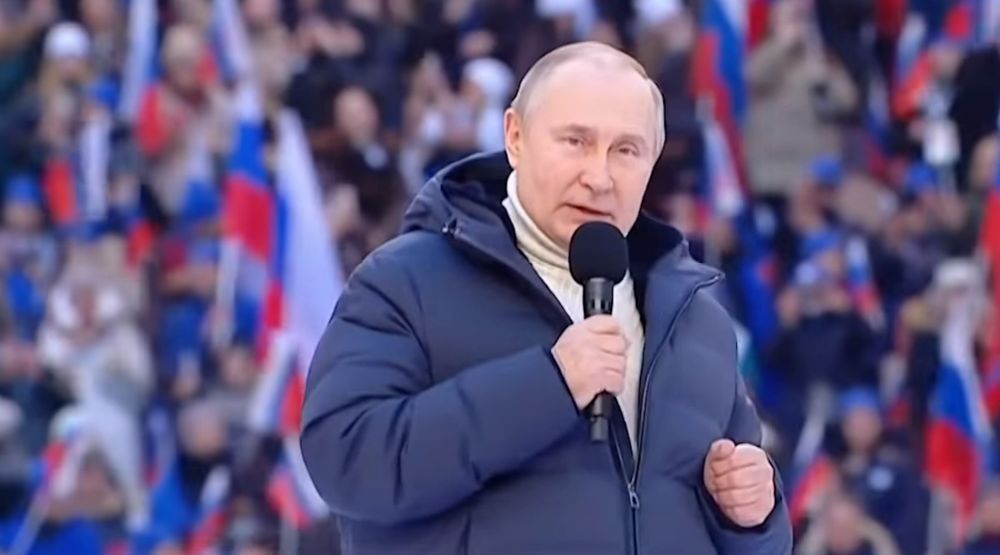 Longtime Putin Watcher: This will only End Badly

I hope I am wrong again about how Russia’s war against Ukraine will end.

As someone who spent 30 years as a foreign correspondent covering the demise of the Soviet Union, revolutions in Eastern Europe, the tribulations of newly independent ex-Communist states and Vladimir Putin’s 22 years restoring dictatorial rule, my track record in prognostication is dismal.

Only a month ago, I was telling anyone who would listen that there was no way Putin would launch a full-scale invasion. He might send a small contingent from the 200,000 troops amassed on Ukraine’s borders to bolster the strips of eastern territory his mercenaries seized and occupied in 2014. But how could he hope to take a country of 44 million people who revolted against his Kremlin puppet eight years earlier and triumphed? Ukrainians want to join the European Union and NATO, not surrender to domination by their neo-Stalinist neighbor.

The optics of Putin’s nationalist rally at Moscow’s Luzhniki stadium on Friday evoked 1930s images of Adolf Hitler riling massive crowds of swastika-waving Germans mesmerized by the siren song of world domination. It was the frightening reality of his power to brainwash his people that finally jolted me out of wishful thinking.

My mistake in misjudging Putin’s threat of a Kremlin assault on Ukraine’s independence was viewing it through the lens of logic. Ukraine is not Putin’s ultimate objective. His forces’ indiscriminate bombardment of civilian targets shows he doesn’t care about the death and destruction he’s wrought that will make enemies and insurgents of Ukrainians for generations.

I fear his miscalculation wasn’t his army’s ability to conquer Ukraine quickly, it was the invasion’s failure to trigger a military response from NATO. That would have given him a pretext for attacking the Western alliance and drawn direct military intervention by the United States.

Putin wants a showdown with the superpower perceived to have won the Cold War more than 30 years ago. He wants a replay of that post-World War II standoff that brought down the Soviet Union without a gunshot, never mind a nuclear missile.

The Kremlin leader blew by all possible offramps from World War III weeks ago. He doesn’t have a conciliatory bone in his body and will stop at nothing to deny his Western nemesis another victory. He’s neither insane nor suicidal, just determined to go down in history as the leader who restored Russia’s imperial glory, whatever the cost to his own country. I hope I’m wrong about this.

I’ve always been an optimist, naively looking on the bright side. In the age of Mutual Assured Destruction — MAD — when the United States and Soviet Union could wipe each other and the rest of humanity off the planet with their nuclear arsenals, even the suggestion of a leader who could pull us back from the brink seemed an opportunity to avert an apocalyptic clash.

Mikhail S. Gorbachev rose to the Soviet leadership in March 1985, less than a year after I arrived in Moscow for my first foreign posting for the Associated Press. Like many of my colleagues in the Western media just two years after the death of Communist stalwart Leonid Brezhnev, I never expected to see a reformer come to power.

Gorbachev launched modest campaigns for glasnost and perestroika, respectively aimed at freeing Soviet citizens to give voice to their problems and to contribute to an ambitious reconstruction of society and the economy. I wasn’t alone in succumbing to the infectious aura of democratic change and the Western political hyperbole of “Europe whole and free.” I thought Gorbachev would succeed, that Soviets hungered for an end to communism’s brutal repressions and restraints on individual liberties and ambitions.

The palace coup against Gorbachev in August 1991 presaged the failure of reform to stave off collapse of the Communist mothership. The handful of Kremlin insiders who carried out the bungled putsch hinted at hidden ranks of reform opponents embedded in the KGB, the GRU military intelligence network, and seasoned diplomats of the Foreign Ministry eager to protect their power.

The enemies of reform watched quietly from the sidelines as Gorbachev tried to dismantle a system of government that neither delivered on its people’s basic needs nor offered them the opportunity to fix what was broken. That’s what you get under one-party rule.

Two years before the Soviet collapse, the overthrow of Communist dictatorship in East Germany with the fall of the Berlin Wall heralded the end of totalitarian government across the former Soviet bloc. Putin, then a KGB operative in the East German city of Dresden, watched the Soviet regime’s authority withering with the defection of allies from the Warsaw Pact.

The euphoria that swept Eastern Europe around the reunification of Germany planted hopes for democratic transitions two years before the Soviet breakup. Independence movements in Ukraine and the Baltic states cracked the façade of a united and functional Soviet Union.

Recent authoritarian drift in Poland and Hungary has been concerning, but even those leaders rigging the judiciary and stifling media independence have reared back in horror at the sight of Russian troops bombing hospitals, schools, and civilian housing in Ukraine. Thousands have been killed on both sides in less than a month.

Putin’s claimed justification for savaging Ukraine is the purported need to remove a neo-Nazi leadership and stop persecution of the Russian-speaking minority. Those are strange characterizations of Ukrainians, people who mostly speak Russian led by a Jewish president, Volodymyr Zelensky. Fighting has taken the lives of women, children, and the elderly and driven one in five Ukrainians from their homes.

Putin doesn’t need or want Ukraine for its territory or natural resources. He has both aplenty in the massive Russian federation, home to huge deposits of gold, diamonds, nickel, cobalt, oil, and natural gas. What he wants is revenge for the humiliation Russia suffered after the Soviet breakup when hardliners like himself lost their unchallenged power.

The buildup to Putin’s 2008 territorial seizures in Georgia and the 2014 landgrabs in Ukraine’s Crimean Peninsula and Donetsk and Luhansk provinces looked much like the preliminaries of the current Ukraine invasion. The forcible change of borders, unseen since the Nazi seizure of Sudetenland from Czechoslovakia in 1938, broke a post-war compact to respect the sovereignty of U.N.-member nations. I told myself that, surely, Putin wouldn’t dare violate the post-war order.

Putin poses as defender of the Russian Orthodox faith. The life-long atheist instrumentalizes religion to convince believers their church is under threat by Ukraine, a state he portrays as duped by Western liberals bent on destroying Russia.

Kremlin analysts watch with trepidation as Putin bombs Ukrainian targets yet fails to break defiant resistance. Russians don’t see these images of destruction on television or in newspapers. State-run media are forbidden to call Russia’s atrocities in Ukraine a war or an invasion. Journalists face up to 15 years in prison for deviating from the official line of Russia as victim.

If bogged-down ground forces and missile attacks fail to bring about Ukrainian surrender, which they won’t, I fear Putin will reach for chemical weapons or Russia’s nuclear arsenal.

Russia is reeling from harsh international sanctions for its aggression. Putin is isolated from his inner circle and oligarchs he helped enrich. Western intelligence warns the siloviki, the “power ministers” of defense, national security, and secret police, are outraged at the failed ground offensive in Ukraine and a Russian death toll said now to exceed 10,000.

How will Putin’s botched Ukraine intervention end? Kremlinologists and Western military strategists are forecasting two primary scenarios: An apocalyptic clash of nuclear-armed titans or an insider hit on a leader seen as recklessly destroying his country. The former is too frightening to contemplate, with Putin all in to achieve his goal of Western democracy in ruins, and his Russian empire as well. The latter seems unlikely, given the degree of security surrounding Putin and Russia’s 143 million citizens powerless to force an omnipotent leader to change course.

I hope I am as wrong as I ever have been.

Carol J Williams
Carol J. Williams is a retired foreign correspondent with 30 years' reporting abroad for the Los Angeles Times and Associated Press. She has reported from more than 80 countries, with a focus on USSR/Russia and Eastern Europe.
Previous article
Don Young of Alaska, the Nation’s Longest-Serving GOP Congressman, is Dead at 88
Next article
How, 50 Years Ago, Washington Citizens Rose Up to Enact Stiff Public Disclosure Laws