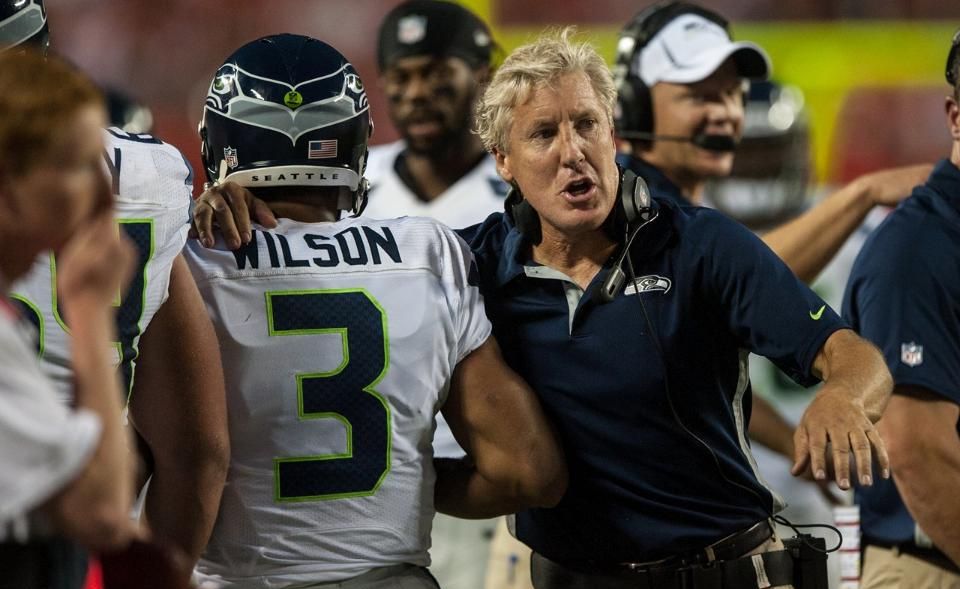 However little Pete Carroll and Russell Wilson have in common regarding football philosophy, they do share a trait in their public oratory — they love to go on.

In his first press conference in Denver as Broncos quarterback, Wilson, ever desperate to be liked, began with a 10-minute fusillade in which he thanked by name what seemed like five percent of the Puget Sound region’s population, then insisted that his NFL-rocking trade was a mutual decision.

A few minutes later at Seahawks headquarters in Renton, Carroll topped Wilson by two minutes, invoking a conversation he had with the late college basketball coaching icon, John Wooden. It allowed him to explain how good coaches don’t ever change philosophies, and oh by the way, it was Wilson on his own who wanted out of Seattle.

Who said defense is on a fade in the NFL?

Wilson and Carroll were dug in hard on damage control regarding the steaming crater in the Seahawks’ roster, true feelings disguised by the polite prevarications and mendacity that attended the run-up to the trade, which showed little sign of abating as the NFL’s business year officially began Wednesday.

Wilson grew tired of trying things Carroll’s way, and Carroll grew tired of Wilson being tired. The pivot point in the narrative slipped out from general manager John Schneider, at Carroll’s side, as he has been for the previous 11 seasons in Seattle.

Answering a question yesterday about what was known about the Seattle future for Wilson beyond the final two years of his contract, Schneider said, “We were under the impression there would be no extension.”

The problem of Wilson’s 2024 season and beyond is the province now of the Broncos. Good luck with that.

Followers of this saga of the fraying between Seahawks titans could surmise that the drop-dead notice probably came after the contretemps of the previous off-season. Wilson went public in national interviews with his laments about the times he has been hit, and sought a say in personnel decisions. Carroll and Schneider were furious with the public peek behind the Seahawks’ tightly controlled curtain.

Armed with a no-trade clause the Seahawks granted in an earlier negotiation, Mark Rodgers, Wilson’s agent, indicated without saying so directly that Wilson wanted to be traded to a team of his choosing. The Seahawks stood firm, in order to make a final Super Bowl try with him in 2021.

But as the season fell to 3-8 and Wilson missed the first three games of his career with a finger injury, it became obvious to all in Wilson’s camp and Carroll/Schneider that a trade must be done this off-season to max out his trade value, especially since Wilson had the leverage to choose his team instead of accepting the highest bidder. Nevertheless, Wilson will count $26 million — his guaranteed money for the next two years — against the Seahawks’ $208 million salary cap in 2022.

The chore of putting together the deal is explored in this story Wednesday in si.com by Albert Breer, who wrote, “Wilson would confide in those around him that if the old equation kept adding up to championships, then he’d be fine with it; but with years passing without rings, he wondered if he could do more if the Seahawks would create a more quarterback-centric model. His own personal legacy, of course, was a part of that, too.”

For their part, the Seahawks under Carroll don’t want a quarterback-centric model. They want a run/pass balance with less risk and more team dependence on defense, a unit whose coaches Carroll largely replaced. The trade returns included a 25-year-old quarterback, Drew Lock, who in three years mostly as a backup in Denver, impressed few around the NFL.

As part of his opening soliloquy to appease a disgruntled mass of fans, Carroll’s theme was second chances. He cited Marshawn Lynch, Quandre Diggs and Jamal Adams as Seahawks players whose pro careers were revived by a trade to the Seahawks under his watch.

“We loved him in the draft,” he said. “Our (scouts) were thrilled about him. He goes 4-1 (in five starts) his rookie season. All the promise that you would hope to see in the numbers. The next two years didn’t work out very well.

Added Schneider: “He’s a guy that, in my opinion, the media has beat down a little bit.”

Wilson, of course, was a third-round pick who needed no second chance, starting with the first game of his rookie season. Lock is nowhere near Wilson’s caliber; then again, since Wilson has won only one playoff game the past five seasons, perhaps that level of play isn’t so far beyond Lock’s grasp.

The won-loss record is, of course, a team measure. Carroll and Schneider know the 7-10 Seahawks have slid into mediocrity, mostly because of their misfires in personnel decisions. Freed from most of the burdens of Wilson’s salary, they have acquired Lock, TE Noah Fant, DT Shelby Harris and five draft picks, and so far in the free-agent signing period, re-signed four of their own and brought four newcomers.

That’s a lot of fresh talent. All of which have the potential to collectively have less impact on game outcomes than Wilson and his late-game sorcery. Carroll and Schneider know it. They have to hit on nearly all the new acquisitions to succeed.

They have never used the term rebuild, not even this week after trading Wilson and cutting defensive stalwart Bobby Wagner.

“We’re right back at it,” Carroll said. ” Everybody that is coming in here is coming in here to do it right now. If you have an approach and a philosophy that you are solidly behind, and can keep going forward, then you just keep moving . . . Guys graduate eventually here.”

Carroll declined to speculate about why Wilson wanted to graduate to Denver.

“It’s not about blaming anybody or forcing the issue in any way in particular,” he said. “Everybody had to agree to this eventually, and we did. It opened up some doorways that we didn’t think existed early at the time.

“He’s seen a lot of great players do a lot of great things by making that move somewhere in their career. Whether it was the quarterbacks that we know of, what happens in the NBA, baseball guys do it. He’s seen that happen. I think it intrigued him.”

Wilson sees himself as an apex player/brand on the level of Tom Brady, Lebron James and Alex Rodriguez, only nicer. And he wants to enhance that profile with multiple championships. So he’s been given a second chance.

Carroll and Schneider have also been given a second chance in Seattle, slate cleaned of the Super Bowl-era talent, because team chair Jody Allen trusted them over Wilson, an almost-certain Hall of Famer.

Here’s my bet: Wilson is more likely to get the Broncos to the Super Bowl next year than Lock is to get the Seahawks to the playoffs. The year after that, it flips, and Wilson enters free agency.

Then new Seahawks owner Jeff Bezos can bring back Wilson back to the Seahawks. By mutual decision.

Art Thiel
Art Thiel is a longtime sports columnist in Seattle, for many years at the Seattle Post-Intelligencer, and now as founding editor at SportsPressNW.com.
Previous article
A New Book Revisits Watergate and Asks the Big Question: Why Did They Do It?
Next article
For Putin, Ukraine Is a Chance for a Soulless Leader to Reclaim Russia’s Soul