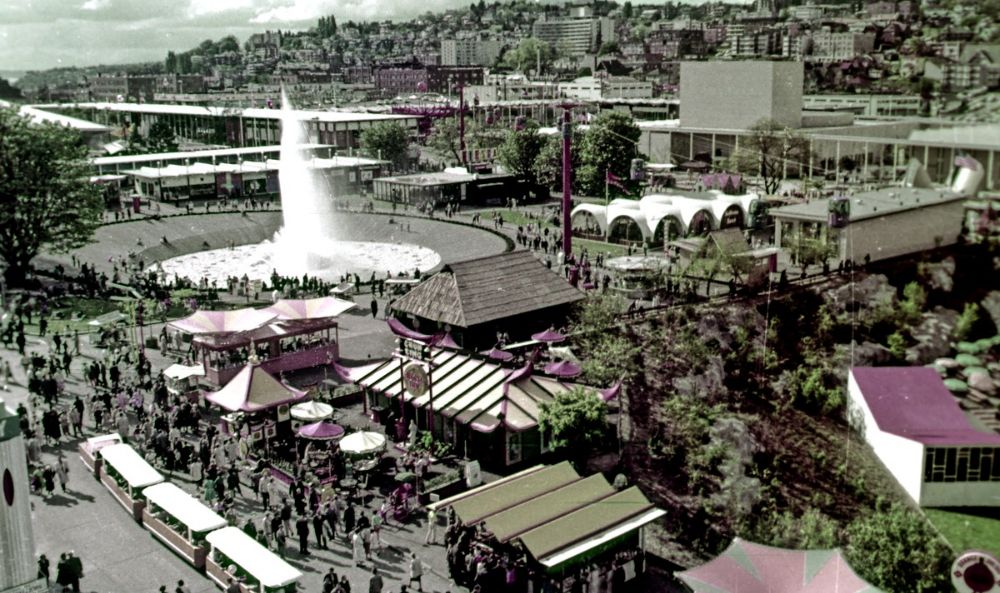 The Zeitgeist of World’s Fairs, Including the One in Seattle, 60 Years Ago

Historical bursts of growth lay groundwork for civic celebrations in Seattle. I’m reminded of this, for next month is the 60th anniversary of the 1962 Seattle World’s Fair, which also grew out of a local burst of economic growth.

The 1893 World’s Columbian Exposition in Chicago, the 1901 Pan American Expo in Buffalo, New York, and the 1905 Portland, Oregon exposition were milestones illustrating such civic breast-beating.

The exposition that most influenced Seattle was the 1893 Columbian Exposition in Chicago.  That show featured a gleaming “White City” (largely constructed of plaster of Paris – a gypsum derivative – and later totally dismantled).  The formula was set in place: family and adult entertainment; history and art exhibits; food and drink everywhere; and showcases for American inventors, architects, and tinkerers.

There is also a personal connection, for the 1893 Columbian event helped instill “Expo Fever” within my own family.  My grandmother, Julia Gwynn Smith Rochester, won third prize in classical singing at the Columbian Exposition.  Her brother-in-law, Percy Rochester, was Washington State’s Deputy Commissioner to the same Chicago show.

This family activity was extended by Junius, my father’s brother, who at age 15 sold water at the 1904 St. Louis fair, and my father, Alfred R. Rochester,  who at age 14 operated a bread-slicing machine at Seattle’s 1909 Alaska-Yukon-Pacific Exposition (currently the University of Washington campus).

Family “Expo Fever” recurred in the 1950s when my father  joined a small luncheon group at Seattle’s Washington Athletic Club.  Quoting from the 2011 HistoryLink history of the fair: “In January 1955, over martinis at the Washington Athletic Club . . . Rochester broached the subject (of a fair) with Seattle Chamber of Commerce Director Don Follett and with Ross Cunningham, a reporter (and editor) for The Seattle Times.  The three agreed that Rochester should try to gain the city council’s support.”

The city council adopted my father’s resolution authorizing the investigation of a Seattle world’s fair.  State Sen. William Goodloe picked up the idea, helping authorize $5,000 for a committee to pursue the project.  Governor Arthur B. Langlie signed the bill into law.

The World’s Fair Commission held its first meeting at Seattle’s Olympic Hotel, with Eddie Carlson presiding over a group of local business leaders. Among the most important decisions of the Commission was finding a site for the Exposition. The chosen neighborhood was sometimes referred to as “Potlatch Meadows,” a nod to early Native use of the area.  Later, David and Louisa Denny, the first white residents, called it “the prairie.”  It eventually became a fading Harrison neighborhood, and today it is Seattle Center.

By law, every exposition – except Seattle’s – was dismantled or plowed under.  Seattle shrewdly used the Fair to construct lasting buildings such as the Monorail, the iconic Space Needle, the International Fountain, the Pacific Science Center, Chihuly Garden and Glass, the Marion Oliver McCaw Hall, the Cornish playhouse, a sports stadium, and Center House.

The genesis of Seattle’s 1962 fair can be explained by economic circumstances (the 1960s were relative boomtimes); strong civic leadership that wanted to replace a run-down neighborhood and stir tourism; an ideal geographical setting; and the successful templates of earlier world’s fairs.

Are we likely to witness another exposition on the scale of the seminal, creative expositions at Chicago, New York, St. Louis, San Francisco, or Seattle?  That’s unlikely.  Impediments to such large-scale shows today include overall expense, the expanding importance of electronic gadgets, sophisticated rival entertainments such as Disney World.

In any case, Happy 60th to Century 21, popularly known as the Seattle World’s Fair. It climaxed and helped to spawn years of growth and civic confidence.

Junius Rochester
Junius Rochester, whose family has shaped the city for many generations, is an award-winning Northwest historian and author of numerous books about Seattle and other places.
Previous article
Total Compromise: How William Barr Sold his Soul
Next article
Winners and Winners in the Short Session of the State Legislature