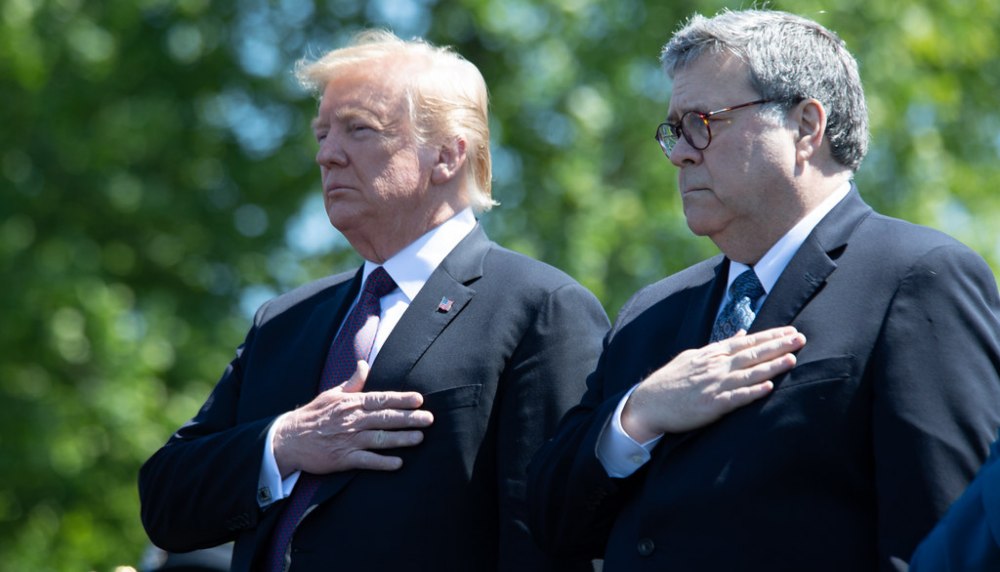 Former Attorney General William Barr wants another Republican candidate in 2024, but also adds that he would vote to put Donald Trump back in the White House.  Words from a Cabinet secretary, whose newly published memoir centered on how Trump went “off the rails” turning “manic and unreasonable” during his last year in office,

In Barr’s new book One Damned Thing After Another: Memoirs of an Attorney General, the author comes across as a ferocious culture warrior, a skilled bureaucratic infighter who battled Trump critics when he took over after Trump fired ineffectual AG Jeff Sessions following the 2018 mid-term elections.

Memoirs by America’s political nabobs are designed to embellish or restore the author’s reputation. Clearly Barr has work to do on both fronts. The news media get fed in-the-room revelations of an unhinged Trump. But Barr offers right-wing-thinking readers a smash mouth conservatism sure to please the Lock her up! crowd.

Barr depicts Trump as a leader willing to challenge Critical Race Theory (“essentially the materialist philosophy of Marxism, substituting racial antagonism for class antagonism”) and take on “the increasingly totalitarian attacks of the radical wing of the Democratic Party.”  He despises mainstream media, blaming the press for defeat of President George H.W. Bush in 1992. (Barr served as AG under the elder Bush.)

Trump was, however, burdened by “frequent pettiness and [his] overtly contentious style.” He lusted to use government as an agent of revenge against critics, but lacked patience to complete the task.  At one point, Barr told Trump, “You know, Mr. President, you’re like a bull in a bull ring and your adversaries have your number.” Barr is repeatedly patronizing of his bullish, boorish boss. He reflect, “It took an ungodly amount of energy and blood to keep (Trump) on track.”

The stories he spins should make us fear for the republic.  For instance, after the George Floyd murder, thousands of protesters appear in Lafayette Park outside the White House. Inside, writes Barr, “Glaring around the semi-circle of officials in front of [Trump’s] desk, he swept his index finger around the semi-circle, pointed at all of us. ‘You’re all losers,’ he yelled, his face reddening – ‘You’re losers!’  he yelled again, tiny flecks of spit arching to his desktop. ‘Fucking losers!’ It was a tantrum.”

Barr obeyed orders, and soon clouds of chemicals cleared Lafayette Park of demonstrators.  Trump and a phalanx of aides then marched across the park for a photo-op in which the President held up (upside down) a Bible in front of St. John’s Episcopal Church.  The event drew vast criticism, and the Episcopal Bishop of Washington, D.C., denounced Trump hours later on morning talk shows.

Barr finally defied Trump and was later shown the door over the President’s “Big Lie” that the 2020 election was stolen.  He tells Trump at the White House, “To date we have not seen fraud on a scale that could have effected a different outcome in this election.” Trump is furious. “Did you say that? Why would you say that?” he demands, referring to an interview Barr had just given to the Associated Press.

It should be remembered that, before the break with Trump, an obedient Barr had ordered the U.S. Dept. of Justice to investigate possible fraud in the 2020 vote. He skirts over other politicizing of Justice and the dropping of charges against Lt. Gen. (retired) Michael Flynn even though Trump’s first National Security Adviser was a self-admitted perjurer.  He claims nothing was improper about reducing the sentence to sometime Trump adviser Roger Stone.

Barr dismisses Trump’s quid-pro-quo as “an absurd idea” that was “pursued in a farcical way.” But he “did not think it was criminal and I still don’t think it was.” The AG washes his own skirts on the episode, recalling a conversation in which he told Trump: “Dammit, Mr. President, I can’t talk about that and I am not going to. He [Trump] was silent for a moment and then quickly got off the line.”

Even though Trump “lost his grip” in 2020, losing an election winnable by “a minor adjustment in his behavior,” Barr sees circumstances under which he’d welcome Trump back to 1600 Pennsylvania Avenue. On the “Today Show” this week, he answered:  “Because I believe that the greatest threat to the country is the progressive agenda being pushed by the Democratic Party, it’s inconceivable to me I would not vote for the Republican nominee.”

Barr gets no thanks for stepping into the line of fire, advancing Trump’s agenda, or airbrushing Trump ugliness. After NBC aired anchor Lester Holt’s interview with the ex-AG, Trump retaliated with a lengthy letter describing Barr as “lazy” and “cowardly,” lacking in “energy, drive or curiosity,” adding “They [the press] broke him just like a trainer breaks a horse.”

“He is groveling to the media hoping to gain acceptance he does not have,” Trump concluded.  A fair critique.

Joel Connelly
I worked for Seattle Post-Intelligencer from 1973 until it ceased print publication in 2009, and SeattlePI.com from 2009 to 6/30/2020. During that time, I wrote about 9 presidential races, 11 Canadian and British Columbia elections‎, four doomed WPPSS nuclear plants, six Washington wilderness battles, creation of two national Monuments (Hanford Reach and San Juan Islands), a 104 million acre Alaska Lands Act, plus the Columbia Gorge National Scenic Area.
Previous article
Of “Just” Wars and Moral Responsibilities
Next article
The Zeitgeist of World’s Fairs, Including the One in Seattle, 60 Years Ago