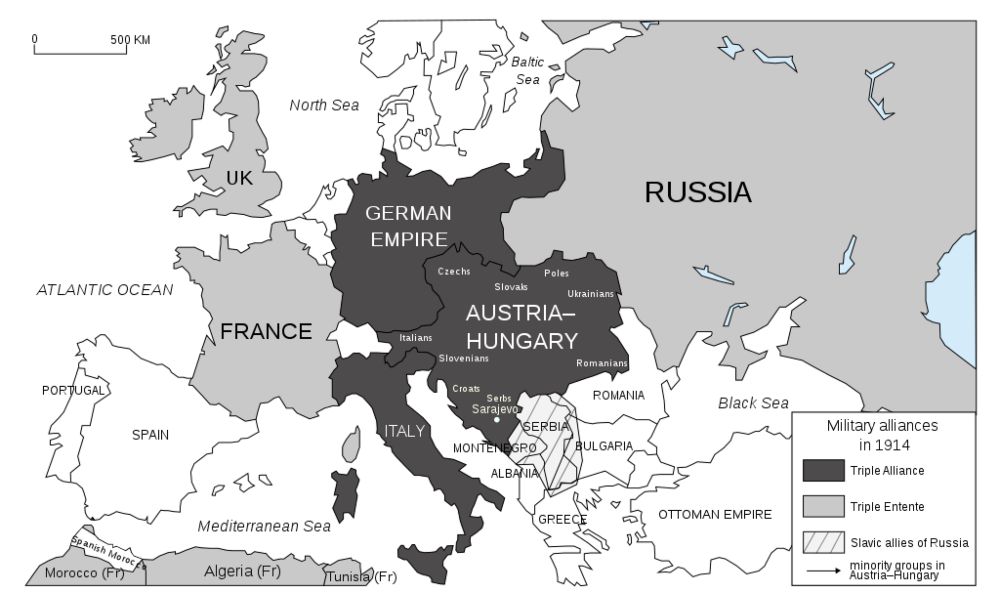 Putin’s attack on Ukraine has sent many of us searching for historical parallels and antecedents. This search naturally fixes on Hitler’s equally unprovoked attack on Poland in 1939, after he seized Austria and northern Czechoslovakia in much the same way Putin grabbed the Crimea and Donbas, to an equally flaccid international response.

For whatever historical rhymes are worth, there are also some striking echoes of World War I. Putin’s bellicose, grandiose rhetoric of grievance recalls that of Germany’s Kaiser Wilhelm II and his generals, the Great War’s primary though not its only instigators. The pronouncements of Putin’s backstage ally, Xi Jinping, reprise German attitudes circa 1914 even more closely.

Kaiser Wilhelm smarted at what he took as the arrogant Western powers’ dismissive attitude toward his nation and himself. “All the long years of my reign, my colleagues, the Monarchs of Europe, have paid no attention to what I have to say,” he told Italy’s King Umberto. “Soon, with my great Navy to endorse my words, they will be more respectful.” Like Putin, he blamed his enemies for starting the war, though his side attacked first. “Ruthlessness and weakness will start the most terrifying war of the world, whose purpose is to destroy Germany. Because there can no longer be any doubts, England, France, and Russia have conspired together to fight a war of annihilation against us.”

Germany used such perceived persecution to justify its invasion of Belgium, whose neutrality it had sworn to protect. Similarly, Putin claims justification for Russia’s invasion of Ukraine, whose territorial integrity it swore to protect. In fact, it was swaggering Germany that made allies of France, Britain, and Russia, which had fought ghastly wars against each other in the preceding century. Now Putin is singlehandedly unifying and reinvigorating NATO.

Even Thomas Mann, German’s most acclaimed novelist then and an outspoken anti-Nazi later, got swept up in the nationalist martial spirit. Germans, Mann said (as paraphrased by Barbara Tuchman in her masterful account of the first war’s outbreak, The Guns of August), “the most educated, law-abiding, peace-loving of all peoples, deserved to be the most powerful, to dominate, to establish a ‘German peace’” over Europe.

“German Kultur will enlighten the world,” one German scientist declared, “and after this war there will never be another.” Germany was destined to undo what one of its politicians called Britain’s “intolerable hegemony” over the world. Substitute “America’s” and the words could be Xi’s or Putin’s. Their imperial claims reprise those of Kaiser Wilhelm’s Germany, which held a similar contempt for the sovereignty of smaller neighbors.

Ukraine’s heroic President Zelensky has an uncanny predecessor in Belgium’s King Albert. He, like Zelensky, emerged from an unpromising background—as a scorned nephew of the monstrous King Leopold—to rally his country to an astonishing resistance. Throughout the war, he continued fighting on the field. The doughty Belgians may have saved Europe by delaying the Germans long enough for the Allies to start to get their act together. The Belgians suffered horribly for it: the Germans pulverized towns and cities—including the medieval gem Louvain—and massacred whole villages to punish the snipers who harried them from the hedgerows. Kaiser Wilhelm and his generals howled in outrage at these volunteer franc-tireurs who, they whined, didn’t play by the rules of war.
Putin could be cribbing their script.

One other lesson from Ukraine’s ordeal is unmistakable and alarming. Muamar al-Qaddafi and Saddam Hussein gave up developing nuclear weapons and were overthrown by the West and killed by their countrymen. Kim Jong-un brandishes his nukes and is untouchable. Ukraine relinquished its nukes, the third-largest stash in the world, in exchange for America’s, Britain’s, and Russia’s signed guarantee of protection. Now we see what such guarantees are worth. Will any country ever again give up nuclear weapons?

What’s now called Ukraine has been a crossroads, and a flashpoint, between East and West since the days of the ancient Greeks and Scythians. Such confrontations could have catastrophic results. In the 14th century the reigning land power there, the Mongols/Tatars of the Golden Horde, collided with an intruding sea power, Italian traders and slavers from Genoa. In 1347 the Tatars besieged the Italian fortress at Caffa in the Crimea, until plague arrived from the east and started felling the Tatars. According to the one surviving contemporary account, they loaded their dead into catapults and launched them over the walls. The Genovesi, falling like fleas, piled into their galleys and fled back to Italy, taking the Black Death with them.

Eric Scigliano
Eric Scigliano has written on varied environmental, cultural and political subjects for many local and national publications. His books include Puget Sound: Sea Between the Mountains, Love War and Circuses (Seeing the Elephant), Michelangelo’s Mountain, Flotsametrics and the Floating World (with Curtis Ebbesmeyer), The Wild Edge, and, newly published, The Big Thaw: Ancient Carbon and a Race to Save the Planet.
Previous article
Pasta in Winter, With a Little Bitterness from Rapini
Next article
Recalling the Goodwill Games: An Investment in Befriending Russia