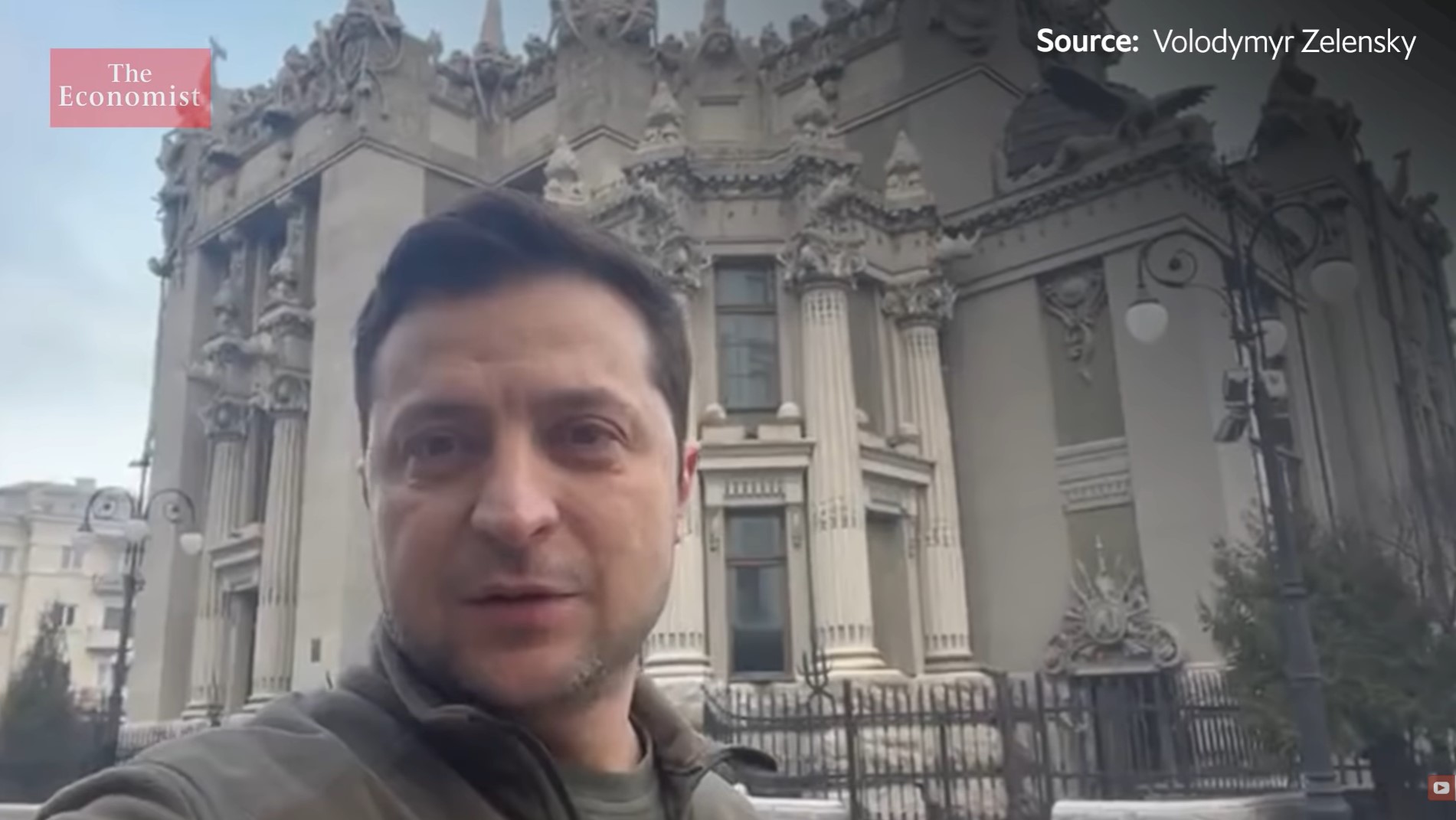 Russia’s invasion of Ukraine has taken a devastating turn entering its second week with President Vladimir Putin’s forces firing missiles and cluster bombs into residential areas of the biggest cities after his massive ground force failed to swiftly topple the government in Kyiv.

The deadly targeting of civilian venues has exposed the Kremlin leader’s fallacy of waging a “special military operation” to liberate Ukraine’s 44 million people he insists are fellow Russians. Putin’s resort to terror tactics spurred accusations of war crimes and threats to see the Kremlin leader prosecuted at the International Criminal Court in The Hague.

A 40-mile-long armored column advancing on Kyiv for days stalled on the outskirts of the capital as it has met fierce resistance by Ukrainian forces and ordinary citizens inspired by President Volodymyr Zelensky to defy the invaders.

Russian forces intensified their assault on Kharkiv, Ukraine’s second-largest city with 1.5 million inhabitants, with rocket fire on residential neighborhoods on Wednesday. A missile strike on the city’s municipal government headquarters on Tuesday killed 10 people. Cell phone video captured the image of a giant fireball engulfing cars and pedestrians on the central square.

Putin has pivoted from threatening Zelensky’s democratically elected government with the nearly 200,000 troops amassed on Ukraine’s borders over the past two months to pounding population centers with heavy artillery, demonstrating his intention to conquer Ukraine.

Western diplomats have struggled for weeks to devise some face-saving “off-ramp” for the Kremlin leader, who clearly miscalculated the strength of Ukrainian defiance of his orders for Kyiv to surrender. Withering international sanctions are hitting Russian consumers hard, isolating them and fomenting domestic protests against the war. Putin has been undeterred by the outside world’s censure, making clear he doesn’t want a path out of the devastation he has unleashed, he wants a conquest of Ukraine by any means necessary.

Russian Foreign Minister Sergei Lavrov repeated Putin’s ominous warnings of last week that any involvement of NATO or the United States in Ukraine risked escalation into World War III and the potential use of nuclear weapons.

Seattle-area Russia experts are adding their voices to worldwide denunciation of Putin for violating the post-World War II U.N. Charter that unites member states in rejecting any change of internationally recognized borders by armed force .

“Putin long ago showed himself to be a cold-blooded killer with no ethical boundaries or care for human life,” said Daniel Chirot, professor emeritus of the University of Washington’s Henry M. Jackson School of International Studies who has written extensively on Russia, Eastern Europe, and tyranny.

If Putin fears he is facing defeat, “he might not hesitate to use nuclear weapons, though at this point he can commit mass murder without resorting to that,” he added.

Chirot disputes, however, that Putin’s attacks on Ukrainian civilians and waving of the nuclear saber suggest the Kremlin leader “has gone off the deep end.” Other political and military Kremlin analysts have been debating whether Putin has become more belligerent and reckless because of his long isolation during the Covid pandemic, even from his closest advisors. Some contend photos showing Putin meeting with world leaders or his Cabinet with him seated a room’s length apart from the others reveals intensified paranoia in a man who has long been a germophobe surrounded by a multilayered security detail. Others suggest Putin is playing  the “lunatic card” to keep his adversaries guessing about his ultimate moves to restore the Kremlin’s Cold War-era “sphere of influence” in neighboring countries now aligned with the West.

Putin’s appearance has changed noticeably in recent months. His sharp-featured face has become pale and swollen, as if he has been treated with steroids or Botox. During long absences from public view during two years of surging coronavirus in Russia, rumors have circulated that he contracted the virus and needed hospitalization and treatment. The man famously vain about his fitness and physique — cue the images of a shirtless Putin on horseback or in martial arts bouts with famous athletes — has appeared languid and bulky, either from weight gain or protective clothing under his suits.

U.S. Rep. Adam Smith (D-WA), chairman of the House Armed Services Committee, likewise warns that Putin is likely to escalate hostilities with “indiscriminate bombing” of the type that Russia used to destroy regime opponents and infrastructure in Chechnya and Syria. In an interview with CNN, Smith urged the Biden administration to provide Ukraine’s defenders with all means necessary, short of direct U.S. confrontation with Russia, to keep up the fight against Putin’s invaders and sabotage any puppet regime he intends to install if Russians are eventually successful in taking Kyiv.

Ukraine’s emergency service agency reported more than 2,000 Ukrainians, mostly civilians, had been killed during the first week of Russian assaults and that hospitals, kindergartens and apartment buildings were among the civilian infrastructure destroyed.

Russia’s TASS news agency cited a Defense Ministry report Wednesday of 498 Russian troops killed in what the state-run media do not refer to as an invasion or war. TASS reported about 1,600 Russians wounded. Ukrainian losses, the Defense Ministry said, included 2,800 killed, 3,700 wounded and 572 Ukrainians taken prisoner.

As civilian casualties mount after a week of relentless bombardment, the United Nations convened a rare emergency session of the 193-nation General Assembly Wednesday and voted overwhelmingly to condemn Russia for the violence unleashed on its neighbor.

The world body voted 141-5 to deplore Russia’s “aggression against Ukraine.” Only Belarus, North Korea, Eritrea, and Syria joined Russia in voting against the resolution. Thirty-five states abstained, including China. The vote was mostly symbolic as the assembly has no enforcement power but sends encouraging support to the beleaguered Ukrainian resisters who refuse to capitulate.

“More is at stake even than the conflict in Ukraine itself,” U.S. Secretary of State Antony Blinken told reporters after the vote. “This is a threat to the security of Europe and the entire rules-based order.”

At least 38 countries have referred Russia to the International Criminal Court, which probes alleged war crimes and crimes against humanity, the Associated Press reported.

“We are crystal clear that Putin cannot commit these horrific acts with impunity,” British Prime Minister Boris Johnson warned in a session of the House of Commons in London. He said Russia’s use of the banned cluster bombs and thermobaric explosives — which suck the oxygen out of people’s lungs in the blast area — already constitute war crimes.

While the defenders of Kyiv and Kharkiv have held off a Russian takeover of their cities, reports from the southern port of Kherson suggest Putin’s forces have taken their first significant city after a weeklong offensive. Kherson, population 300,000, is a strategic gateway on the Dnieper River to the Black Sea and just north of the Russian-occupied Crimean Peninsula. Ukrainian sources in Kyiv said local residents continued to hold off the invaders but Western media in the region reported the city surrounded and cut off from the rest of the country.

The intensified warfare across hundreds of miles of Ukrainian border have fueled a refugee crisis, with nearly 1 million fleeing for safety to the NATO-allied countries west of Ukraine and Belarus.

Carol J Williams
Carol J. Williams is a retired foreign correspondent with 30 years' reporting abroad for the Los Angeles Times and Associated Press. She has reported from more than 80 countries, with a focus on USSR/Russia and Eastern Europe.
Previous article
Victory for Washington’s Campaign Finance Laws: Court Rules Against Grocery Lobbyists
Next article
Ex-Mayor Charles Royer: My Days at KING