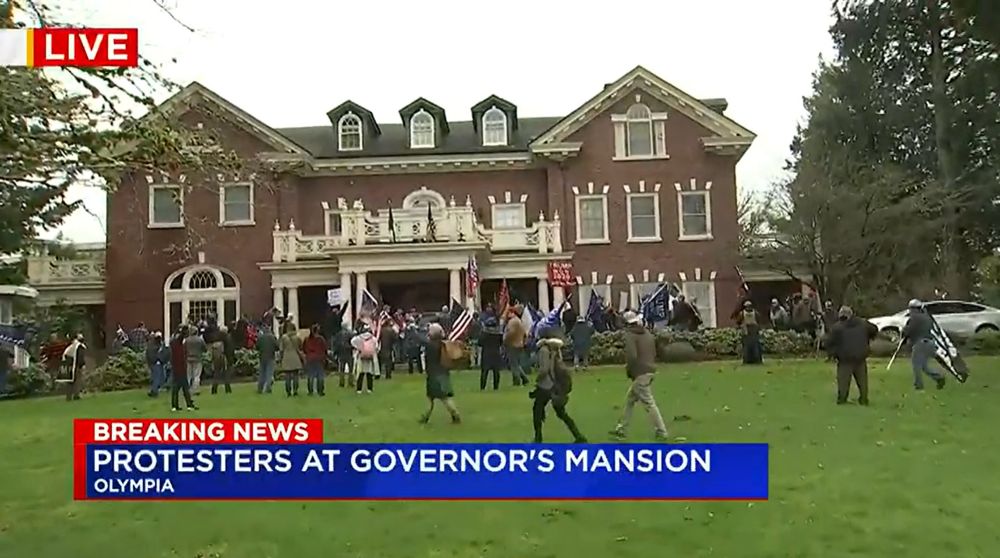 Punish the Liars? Would Inslee’s Proposed Bill Have been Legal?

It looks like those of us who lie about election results are safe for another year.  Or not.

Gov. Jay Inslee’s proposed legislation, under which any elected official or candidate who lied about an election result would have faced up to 364 days in jail, has perished. It would have penalized lies that inspired people to actually commit a crime such as storming the state capitol or invading the grounds of the Governor’s mansion.

Inslee proposed and Sen. David Frockt introduced a bill that would have made it a gross misdemeanor for any office-holder or candidate to “knowingly make false statements or claims regarding the election process or election results, which statements or claims are made for the purpose of undermining the election process or election results and are directed to inciting or producing imminent lawless action and such statements or claims produce such action.”  The text referred explicitly to  the storming of the U.S. Capitol on January 6, 2021 and said it would prevent bad actors “from bringing forward false claims with the purpose of casting doubt on one of our most sacred institutions.”

Of course, virtually everyone but the Trump true believers and the cynics who stoke their resentments was appalled by the January 6 storming of the Capitol by people who wanted to “stop the [non-existent] steal.” In Olympia, it was also disturbing to see people of similar persuasion invade the grounds of the Governor’s mansion.

Well-intentioned or not, would Inslee’s bill have been constitutional?  Maybe. Given the current SCOTUS majority’s disdain for precedent, who knows what’s constitutional these days? Inslee insisted that the proposed legislation would not violate First Amendment guarantees of free speech. The Seattle Times didn’t buy the Governor’s assurance.  Under a headline that read, “Inslee’s solution to ‘big lie’ threatens free speech,” the Times  editorialized that Inslee’s proposal “is a clear threat to free speech and must not move forward.”

After a state senate hearing on the bill, George Washington University law professor Catherine Ross told the Seattle Times  that when she read the original version of the bill, “I thought it was deeply flawed.”  However, the Times reported, she said at the hearing, that while “[t]here is no way to know what will happen when this is challenged in court,” Ross thought the bill “treads a lot of fresh territory in trying to evade all the obstacles. . . . I think there’s a real shot at surviving.”

That fell somewhat short of a ringing endorsement.

The bill wouldn’t have criminalized lying per se, which would have been a constitutional non-starter. The Washington supreme court decided 5-4 in 2007 that politicians have a right to lie in campaigns.  If it’s illegal to lie, then the state itself must decide what’s true, and, Justice Johnson wrote for the majority, “[t]he notion that the government, rather than the people, may be the final arbiter of truth in political debate is fundamentally at odds with the First Amendment.”

Five years later, the U.S. Supreme Court  created nation-wide First Amendment protection for lying.  In Alvarez, it reversed the conviction of a man who had violated federal law by falsely claiming he had received the Congressional Medal of Honor (among other false claims.) “Permitting the government to decree this speech to be a criminal offense, whether shouted from the rooftops or made in a barely audible whisper,” the majority said, “would endorse government authority to compile a list of subjects about which false statements are punishable. That governmental power has no clear limiting principle. Our constitutional tradition stands against the idea that we need Oceania’s Ministry of Truth. (See G. Orwell, Nineteen Eighty-Four. )”

The path to constitutionality, the Inslee drafters knew, required squeezing a bill through the very narrow opening that SCOTUS’ 1969 Brandenburg decision left for evading the First Amendment if you criminalize political speech. In that case the appellant, Brandenburg, was a Ku Klux Klan leader who had told a dozen Klansmen and an invited TV news team on an Ohio farm that  “if our President, our Congress, our Supreme Court, continues to suppress the white, Caucasian race, it’s possible that there might have to be some revenge taken.  We are marching on Congress July the Fourth, four hundred thousand strong.”   (Don’t say Trump and his toadies lack a sense of history.)

Brandenburg was convicted under an old Ohio law of “advocat[ing] . . . the duty, necessity, or propriety of crime, sabotage, violence, or unlawful methods of terrorism as a means of accomplishing industrial or political reform,” and for “voluntarily assembl[ing] with any society, group, or assemblage of persons formed to teach or advocate the doctrines of criminal syndicalism.”

SCOTUS reversed Brandenburg’s conviction because he had been indicted for “mere advocacy not distinguished from incitement to imminent lawless action “ (”Imminent” means right now.  “Sic ‘em” is generally recognized as an invitation to canine violence.  But what if the dog has never learned the command?  Or if there’s no one to sic?  Or, for that matter, there’s no dog?  The threat isn’t imminent.) “Incitement” and “imminent,” the drafters of Inslee’s bill clearly hoped, were the magic words.  They put them into the bill.

Which, for now, since the bill died in the Legislature, is beside the point. So are demagogues now free to sic supporters or dupes on centers of Washington’s elected government?  Of course not.

Under current Washington law, encouraging people to storm the capitol or invade the governor’s mansion would already be a crime.  Unsurprisingly, “[a] person is legally accountable for the conduct of another person when  . . .  he or she causes an innocent or irresponsible person to engage in such conduct; or . . .  [w]ith knowledge that it will promote or facilitate the commission of the crime, he or she . . .  [s]olicits, commands, encourages, or requests [an]other person to commit it.”

In other words, the Inslee bill wasn’t needed to nail people who actually instigate violence.  It was, ultimately, about punishing a certain kind of – repugnant – speech in a way that courts might or might not have found legit.  It would have criminalized acts that were already illegal.

Legally dubious as the Inslee bill was, it might stage a comeback back next year, since posturing against Trump hordes ranks right up there politically with taking a strong stand against lying. Meanwhile, liars have at least a year’s reprieve.