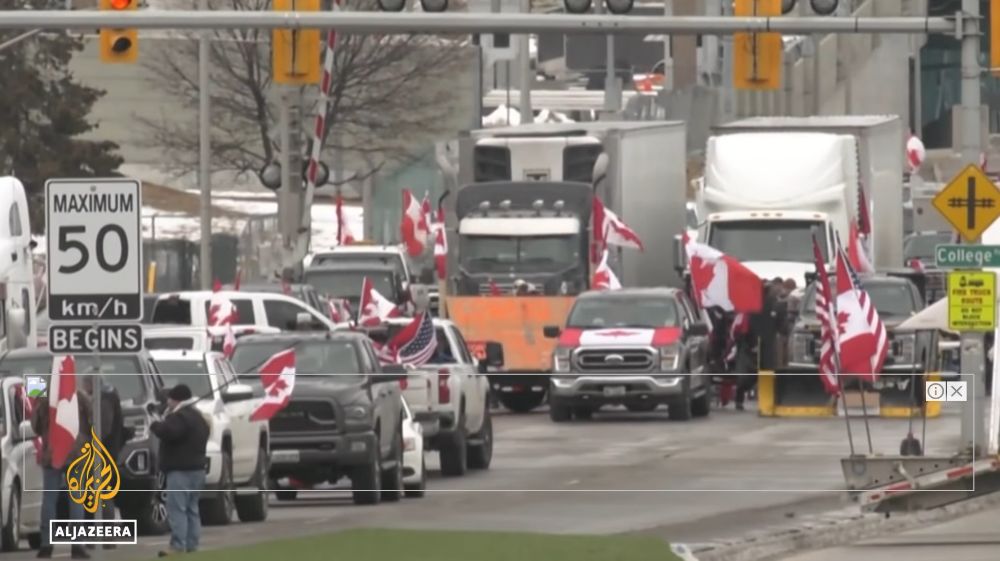 A “Freedom Convoy” of trucks protesting vaccine mandates rolled through downtown Vancouver last Saturday, a week after downtown Ottawa was occupied. The convoy was met on the streets by counter protesters and a tart message from Mayor Kennedy Stewart: “Vancouver doesn’t want you here. Make your point and go home.”

The message from His Worship drew far-off attention from Sen. Ted Cruz, R-Texas.  Conservative media in the United States has lionized what began as a caravan to Ottawa by a minority of truckers, with mounting evidence that money to finance anti-vaccine protests is coming from south of the border. “Vancouver doesn’t want truck drivers there,” Sen. Cruz Tweeted. “Folks might feel differently with empty shelves.”

The Lower Mainland of British Columbia did briefly have supplies interrupted, but that was caused by the floods of mid-November.  Mayor Stewart had a message for the caustic Texan: “Can someone tell Ted Cruz our store shelves are fine thanks to the 90 percent of Canadian truckers who are fully vaccinated?”

Lines of honking trucks make for great TV, and they have made it impossible for Ottawa residents to sleep and shop downtown. Off-camera, the story is different.  As veteran Global TV pundit Keith Baldry noted, at most 3,500 people were protesting and counter protesting in downtown Vancouver last weekend. Meanwhile, on that Saturday, 50,000 people were vaccinated or received booster shots.

Resistance to vaccination in the Great White North is far less than in the states. As of Wednesday, 90.3 percent (4.5 million) of eligible people aged 5 and older in British Columbia have received at least one shot in the arm, and 84.8 percent have received their second dose.  The figures for eligible adults: 93.4 percent and 90.8 percent. Vaccine passports, required for indoor dining and gatherings, have been supported by “the vast majority,” British Columbia Premier John Horgan said Wednesday. The province this week extended vaccine mandates to dentists, chiropractors and other regulated professionals.

Nationally, the right-wing Peoples Party of Canada, running on an anti-vaccination platform, scored just 5 percent of the vote in last September’s Canadian federal election. Voters returned the Liberal Party of Prime Minister Justin Trudeau, albeit with a minority 160 seats in the 388-member House of Commons. The conservative premiers of Alberta and Saskatchewan, slowest to act on the COVID-19 pandemic, show up in polls with the country’s lowest approval ratings.

The dissident truckers have been joined in Ottawa by a variety of right-wing advocates: Confederate flags are seen as well as Trump 2024 signs.  (Trump hailed the trucker protest in a Texas speech last weekend.) Protest leaders have demanded not only removal of all vaccine mandates, but that Trudeau’s recently reelected government be replaced.

Trudeau has not called in Canada’s military to remove protesters camping out in downtown Ottawa, insisting that dealing with the now-stationary convoy is the responsibility of local and Ontario Provincial Police.  He has an historical reason to be hesitant.  The PM’s father, Prime Minister Pierre Elliott Trudeau, evoked Canada’s War Measures Act and called out the military in 1970 when French Canadian separatists kidnapped a Quebec cabinet minister and a diplomat. That action remains controversial to this day.

Still, Trudeau has taken a tough line: The anti-vaccine protests, which have spread to two much-used border crossings, defy the Canadian motto of “peace, order and good government.” In parliament the Prime Minister declared:  “I want to make it very clear: We are not intimidated by those who hurl insults and abuse at small business workers and steal food from the homeless.  We won’t give in to those who fly racist flags. We won’t cave to those who engage in vandalism or dishonor the memory of our veterans.”

Tough words, but a limited number of protesters can do unlimited economic damage.  Between 50 and 75 vehicles, and 100 or so demonstrators, have blocked the busy Ambassador Bridge which leads from Windsor, Ontario, into Detroit.  The bridge carries a quarter of trade between Canada and the U.S., and the two nations are the world’s largest trading partners.

“It is already having a huge impact on Canadian industry and Canadian workers: We’ve seen the criminal acts of thuggery and the obnoxiousness that they inflicted on the people of Ontario. Now they’re blocking our ports of entry,” cabinet minister Bill Blair said Wednesday.  (Blair is a former Toronto chief of police.) A similar blockade, at Coutts, Alberta, has resulted in hours-long delays at a border crossing that carries agricultural exports between the two countries.

“Illegal occupation and blockade happening in Ontario must stop,” Ontario Premier Doug Ford, a Conservative, declared Wednesday. But how? Auto industry groups and the city of Windsor are seeking a court injunction. It seems, however, that only intervention by the Ontario Provincial Police will lift the bridge blockade. Friday, an Ontario judge ruled that protestors at the international crossing could be forcibly removed.

Conservative media and politicians in the United States have been wetting themselves over north-of-the-border protests.  It’s almost reminiscent of the New Left in the 1960s, taking pleasure at disruptive protest even with no clear end and objective.  Saskatchewan and Alberta are set to remove mandatory mask mandates, but vaccination is supported by an overwhelming majority of Canadians.

The trucker protesters are “heroes” and “patriots” who are “marching for your freedom and for my freedom,” Sen. Cruz declared on Fox News. Tucker Carlson has pronounced that there is “no more fearful despot in the world than Justin Trudeau.” Fox viewers have not been treated to such scenes as protesters dancing atop Canada’s Tomb of the Unknown Soldier, or protesters carrying tire irons at the Alberta border blockade.

Ex-President Trump has weighed in again, decrying Trudeau as a “far left lunatic” who has “destroyed Canada with insane COVID mandates.” Once more seeming to encourage disruption, Trump in a statement invited Canadian and American truckers to Washington, D.C., to protest “Biden’s ridiculous COVID policies.” (Canadian truckers entering the United States must be vaccinated, by the way.) Florida Gov. Ron DeSantis and Texas AG Ken Paxton have announced they will investigate GoFundMe for cutting off donations to the Ottawa protest.

A basic truth remains: The Canadian protest lacks public support.  A higher percentage of Canadians have been vaccinated than those south of the 49th Parallel.  Architects of COVID-19 response, such as B.C.’s Premier Horgan and provincial Health Officer Bonnie Henry, continue to get positive marks in opinion surveys.

The disruptions demonstrate an age-old truism. The empty drum bangs loudest. Still, transboundary demagoguery is in the air.  “Justin Trudeau does not like truck drivers: He thinks they’re revolting,” Tucker Carlson charged with no supporting evidence. The fact is, as a young man, Trudeau worked as a tavern bouncer and river guide, and as an adult MP decked a beefy Conservative counterpart at a charity boxing match. He takes on all comers when the House of Commons holds Question Period.

The betting here is that if Tucker Carlson ever found himself in the ring with Justin Trudeau, jousting verbally or with boxing gloves, Trudeau would send him down for the count.

Joel Connelly
I worked for Seattle Post-Intelligencer from 1973 until it ceased print publication in 2009, and SeattlePI.com from 2009 to 6/30/2020. During that time, I wrote about 9 presidential races, 11 Canadian and British Columbia elections‎, four doomed WPPSS nuclear plants, six Washington wilderness battles, creation of two national Monuments (Hanford Reach and San Juan Islands), a 104 million acre Alaska Lands Act, plus the Columbia Gorge National Scenic Area.
Previous article
In Apocalypse, all is Revealed: Lessons from COVID (and the Olympics)
Next article
David Guterson’s New Novel: Elegiac and Touched with Seattle Noir