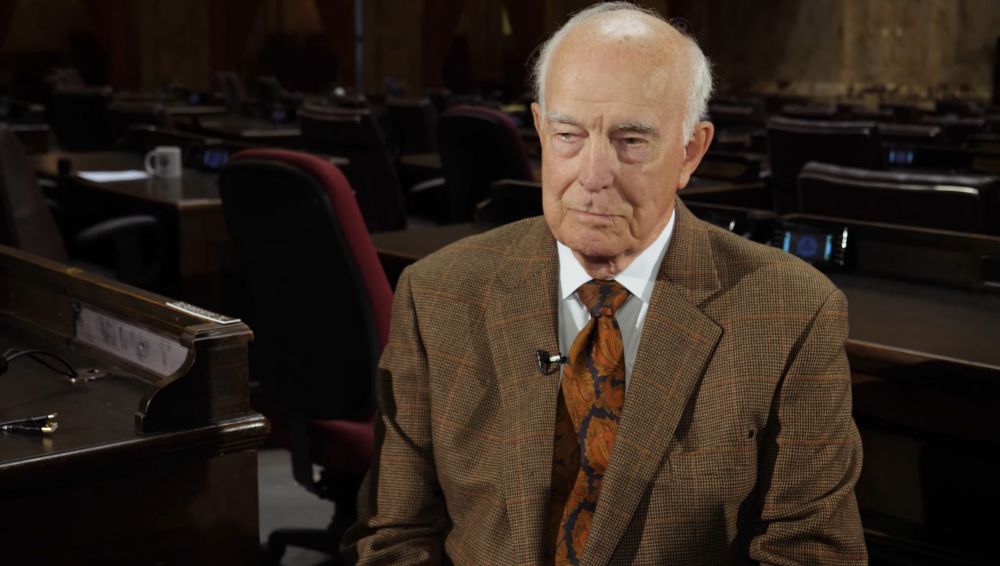 Every Washingtonian should read Dan Evans’ new autobiography. Daniel J. Evans: An Autobiography. His story, which Evans begins with his family’s arrival before statehood, serves as a history of our state.  Arguably, his accomplishments, combined with the powerful leadership of Senators Warren Magnuson and Henry Jackson, created the Washington we know today. Another review of the Evans book appeared in Post Alley by Joel Connelly.

But Evans’ story is also the story of how the Republican party nationally, and here at home, radically changed over the past 70 years until now there would be no room in the party for a man like Dan Evans, even if refuses to accept that.

Dan Evans came from a family of Republican activists.  Throughout his long career he was a liberal (he would prefer the term “progressive”) Republican.  To his credit, Evans was also an active, partisan Republican.  Unlike many elected officials, who try to ignore the party, Evans routinely waded into interparty convention and primary battles.

Young Dan Evans was a delegate to the 1948 Republican convention where he supported liberal Harold Stassen over Tom Dewey. When he returned home from the Navy, Evans became active in a group of idealistic young liberal Seattle Republican reformers including Joel Pritchard, Slade Gorton, and John Spellman.  Evans was elected to the State House in 1956;  Pritchard and Gorton joined him in the House two years later. After the 1960 election, the Republican members of the House elected Evans as their leader.  This was the era of liberal Eisenhower Republicanism and Evans’ philosophy was solidly in the majority in the GOP. Dramatic change was on the horizon.

In 1964, Dan Evans ran for Governor.  He won because our state has never had party registration and closed party primaries. In each of his three races for Governor, and his race for the U.S. Senate, Evans faced conservative primary opponents favored by the GOP base. Each time Evans prevailed by attracting independents and moderates in our wide-open primary system.  His centrist, pragmatic policies were popular with voters and with the Rockefeller wing of the national GOP, but the Republican party was moving away from him.

Evans stubbornly supported liberal New York Governor Nelson Rockefeller in 1964 and 1968 while the party activists were backing first Barry Goldwater, then Ronald Reagan or Richard Nixon.  Anti-Evans conservatives took control of the King County Republican Party, while Evans loyalists held onto control of the state party during his governorship. As Evans puts it in the book, following his 1964 victory in the governor’s race, the state party became divided: “for years to come philosophical divisions would vex the Republican party in Washington state.”

In 1976, Evans chose not to run for a fourth term as Governor.  He supported Gerald Ford for President.  Washington state Republicans, however, were signing up for the Reagan revolution en masse. By 1981, the long struggle between conservatives and “Dan Evans Republicans” was over. State Party Chair Jennifer Dunn, who had begun her political career leading the Reagan campaign in Washington state, typified the party.  We were all Reaganites.

During fall quarter of my freshman year at Western Washington University, I volunteered every day for the Reagan campaign and Slade Gorton’s U.S. Senate campaign. (Not the best choice I ever made in terms of my social life!) By 1985 I was a member of the Republican staff of the State Senate. In 1988, I ran for the legislature for the first time. The Republican leaders I followed then talked about the Evans faction in the past tense. Evans loyalists Ralph Munro and Sam Reed would hold onto the office of Secretary of State, but they were an anomaly. Evans was succeeded by Dixy Lee Ray as Governor and then (in 1980) by John Spellman – the last Republican to hold the Governor’s office.

Despite the years of bitter struggle, the differences between the Evans supporters and the Reaganites were really rather subtle, which is why leaders like Slade Gorton were able to adapt to the new era. In 1983, Dan Evans won a special election to the U.S. Senate following the death of Senator Jackson.

In the Senate, Evans generally agreed with Reagan on economic and national defense issues, and disagreed with him on aid to the Nicaraguan contras, and especially on the environment and protection of wilderness areas and open spaces.  But remember, Ronald Reagan supported NATO, free trade, and amnesty for immigrants here illegally.  The differences between Dan Evans and the Goldwater/Reagan/Bush GOP were nothing compared to the civil wars to come.

The Republican party, nationally and in Washington state, enjoyed roughly 25 years of ideological stability.  Yes, the far right, led by Pat Robertson, Pat Buchanan, and Ron Paul, would rise up during election years, but the Reaganite establishment usually prevailed.  For President we nominated Bush, then Dole, then another Bush, McCain, and Romney.  Evangelical fundamentalist Ellen Craswell’s victory in an overcrowded primary for Governor in 1996 was anomalous.  By and large we nominated people for statewide office like Slade Gorton, George Nethercutt, Rod Chandler, Ken Eikenberry, Dino Rossi, and Rob McKenna.  I was even elected  state party chairman three times. But this era of good feelings would not last.

The rise of the Tea Party and the “Freedom Caucus” in the US House weakened the Reaganite hold on the party.  Trump’s victory in 2016 obliterated it. In 2016, a majority of the Washington state delegation to the national convention opposed Trump.  The party’s 2016 nominees for US Senate and Governor, myself and Bill Bryant, announced we would not vote for Trump, and we both lost by large margins.

By 2020, Republicans in Washington state enthusiastically nominated Loren Culp, the Trumpiest of all the candidates for Governor.  This year the only serious Republican candidate for the US Senate, Tiffany Smiley, is a Trump supporter.  Republican elected officials now are either active Trump supporters, or are silently submissive.

Where does this leave a man like Dan Evans? He addresses that question in the last five pages of his book.  He says he is still a Republican because he continues to fight for “Republican principles,” and says “Donald J. Trump is not a Republican.” This despite the fact that most Republican voters now share Trump’s principles, not the principles of Ronald Reagan or Dan Evans.  History makes clear that the principles and views held by a political party are not static, they evolve to fit the times.

I had the opportunity to speak about the future of the party with Evans in attendance in June of 2019 when I was invited to address the Board of Mainstream Republicans, a group formed long ago to promote Dan Evans Republicanism.  I argued that the only hope Republicans had to succeed in Washington state was to loudly and publicly repudiate Trump and all he stood for; to make it clear that Washington state Republicans were not Trump Republicans, even if that meant splitting the party.

Gov. Evans firmly disagreed with me, arguing that the party had been badly split during the Goldwater era, but had recovered, and that in order to win we needed to pull Republicans together, not push them away. This is essentially the view held by most Republicans elected pre-Trump.  Keep your head down and wait out the storm.  This too shall pass.

Perhaps Evans’s advice will hold up, though no one can say what the Republican party might look like 10-50 years from now, if it still exists.  A famous incident from Evans’ career illustrates how far away the party stands now from the principles Evans bravely exemplified.

In September 1965, Governor Dan Evans stood before the Republican State Committee meeting in Port Angeles and declared that the right wing radicals of that era, the John Birch Society, “have no place in our party. Let them leave!” Some did stomp out, but the State Committee passed a resolution endorsing Evans’ speech, and several state parties followed suit.  The base of the Republican party stood with Evans and repudiated extremism.

In his autobiography, Dan Evans talks about his political hero, Teddy Roosevelt, adding, “I wish he had not felt compelled to leave the Republican party” [as TR did in 1912, throwing the Presidency to Woodrow Wilson].  I see it differently.  Today, America needs more Republicans like TR, willing to put country before party, and leave a Republican party that bears no resemblance to the party of Lincoln, Reagan – or Dan Evans.

Chris Vance
Former Washington State Republican lawmaker and State Party Chairman. Republican nominee for the US Senate in 2016. Now an independent.
Previous article
Debate: Does Seattle Have a Crime Problem?
Next article
Time to Finish the Job: Enact the ERA