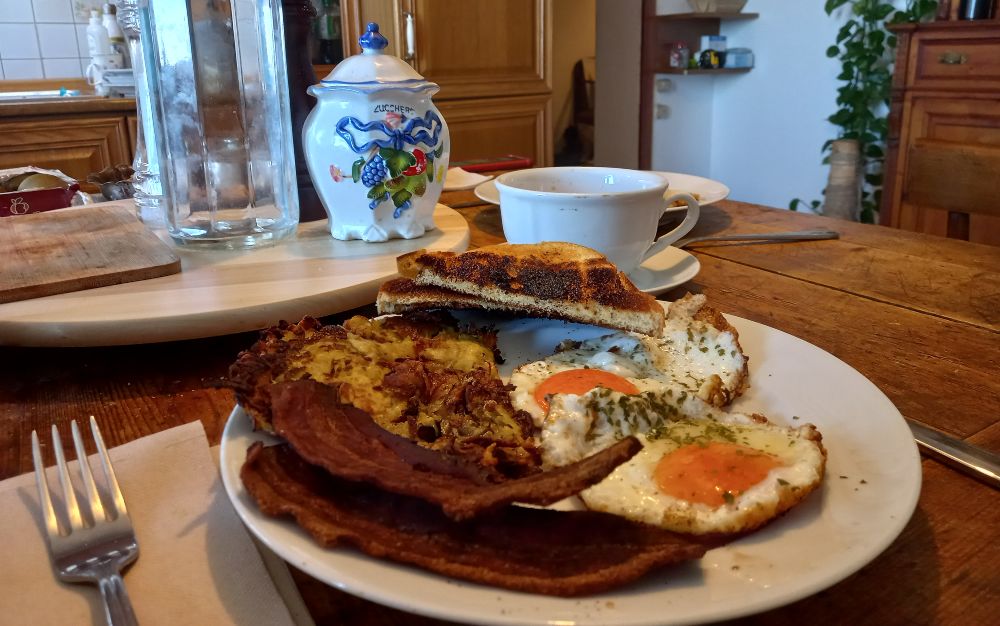 I’ve said it before: One wins precious little sympathy whining about the food in Italy, that culinary superpower where my wife and I have lived for five years. But after my recent lament about Italy’s slim pickings in ethnic foods, I’m ready to go out on a limb again and express my deepfelt expat’s longing for yet another kind of fare: the all-American breakfast.

It’s an interesting neurological phenomenon, perhaps akin to the famous Pavlovian dog experiment. With the smell of coffee brewing, I occasionally get a fierce desire for a full breakfast. The kind that, when you step away from the table, you swear you will not eat for days. Or least until dinnertime.

Now, a handful of places here that cater to the summer tourist trade offer a full English breakfast. Oh, my God. Three fried eggs swimming in butter. Bacon strips. Sausages. Fried potatoes. Toast. Stewed tomato slices. And don’t forget the baked beans. All presented on a collection of plates filling most of the table. Sometimes there’s even a slice of breakfast torte. I’ve done this a few times, but with considerable regret some hours later.

I’m reminded of a scene in an Alfred Hitchcock movie where a police inspector must order his full English breakfast at his office desk because his wife is taking French cooking classes and serving him unrecognizable fish parts in wine broth. The look on his face is one of gustatory salvation. I feel his relief.

But I’m talking about the more modest American-style breakfast, perhaps downsized and made more ascetic by descendants of the Puritans. This is the classic two eggs, hash brown potatoes, toast, and sometimes bacon, if you want to reach the top of the self-indulgent and/or cholesterol gauge. Even the American version is a lot of food to consume at the start of the day.

Italians have a completely different morning regimen. They begin their day with two simple items. A small baked pastry eaten within seconds while waiting for a caffe or cappuccino to be made. Then they down the drink in one gulp. Total elapsed time: under 90 seconds. Personally, I prefer a first meal that is a bit more relaxed.

So, after suffering this recurrent urge for several years, I decided to make an American-style breakfast myself. Mind you, most of it is not difficult. Eggs are easy, as is toast. But as my long-suffering wife knows, I have always ordered my potatoes with specific adjectives. I want them well-done. Crunchy and crispy, like from a 10-alarm fire.

In American diners, when I would order this, the waiter would almost always politely nod while making a quick scrawl on the pad. Minutes later, a plate of soft, white, squishy potatoes would appear. Not at all satisfactory. My wife would roll her eyes as she knew what was coming next. I would send them back. Sometimes I would hear a plate crash in the kitchen. Maybe an expletive or two. I imagine a burly, short-order cook, arms covered in tattoos, grabbing a butcher knife in a threatening fashion. Sometimes the potatoes returned barely more well-done. Sometimes they returned completely charred — which was perfect.

I used an Italian cheese grater to grate a potato. I shaped the shavings into somewhat of a flat patty. Sprinkled oil in a cast-iron pan and plopped it in. I fried the heck out of it. Flipped it. Flipped it again. And flipped it once more. I now see why cooks were not pleased at my returned plate. One must watch the cooking carefully, lest the thing morph into a solid block. Almost by definition, short-order cooks lack patience.

It was delicious. I’m sure my wife would have had any number of things to say — about my preparation methods, plate presentation, and the surreptitious use of her precious cast-iron cookware — but it was all worth it to satisfy my sudden craving.

I have lately wondered if Stanley Tucci’s American upbringing ever causes him to crave hash browns. And is there an Italian version, perhaps with extra-virgin olive oil from Calabria? Likely not.

But in the meantime, I now know I can slake my craving with a passable, self-built American breakfast. I can even send it back without fear of retribution.

Mark Hinshaw
Mark Hinshaw is a retired architect and city planner who lived in Seattle for more than 40 years. For 12 years he had a regular column on architecture for The Seattle Times and later was a frequent contributor to Crosscut. He now lives in a small hill town in Italy.
Previous article
Backlash: West Coast Cities Lose Patience with Homelessness Crisis
Next article
Why Joe Rogan Matters