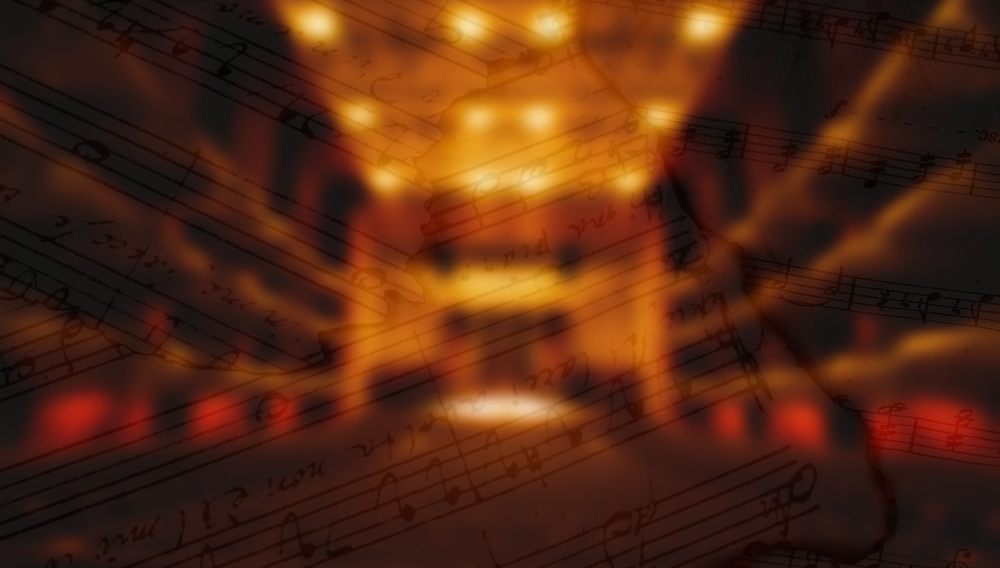 Through the Murk: A Bad Night at Benaroya

Some reviews “write themselves.” A theme seems to emerge without effort, the lead unfolds like a paper flower in hot lime-flower tea.

Other reviews require some or a lot of thought to come into focus. Others never do. Fragments of what was seen and heard lie on the card-table like the bits of a 1000-piece jigsaw that came without a box.

There may be a picture hiding here, but the only sure thing is that you don’t see it. What follows are some of the more coherent impressions of what turned out to be a thoroughly incoherent evening.

The audience for the first of two “special holiday baroque” concerts at Benaroya Hall was encouragingly numerous, considering the foul weather and the late hour, though because seating was confined to main floor and first balcony, less numerous than it looked.

Sitting for the first time I can remember away from my favorite place on the acoustic sweet spot “second tier,” I wondered whether the sound would be appreciably different in seat A1 Right.

Reading the program and its copious three columns of notes, I wondered about the “baroque” label. Apart from the opening palate cleanser, a three-minute fragment of Handel for contralto and solo trumpet snipped from the opening of a Handel ode for Queen Anne’s birthday and some of the more familiar Christmasy bits of his Messiah, the bulk of the music was solidly “classical.” Even the Messiah excerpts were taken from Mozart’s dubious re-orchestration designed for private performances in Viennese households which found the original too austere and scrawny-sounding.

Scrawny certainly seemed a just description of the band assembled for the show: A reduced force of string players huddled together on a stage where we’re used to seeing 50.

Once SSO associate conductor Lee Mills gave the downbeat, scrawny seemed over-generous. The ensemble’s sound seemed to emerge from a muffled indeterminate source hovering over the audience. It felt as if I was wearing ear-plugs.

Could the acoustics of Benaroya’s “Founder’s Tier” possibly be so wretched? Was the seat I occupied one of the dead spots I’d heard sbout from time to time since the hall opened? Or had my hearing suddenly degenerated since my last live visit just five weeks earlier?

Whatever the reason, I spent the next while in auditory Limbo. Sherezade Panthaki deployed her lovely liquid soprano through a misty sieve. Tenor Zach Finkelstein, boasted veteran of 32 full-length Messiahs with 14 ensembles over five seasons, seemed to emit only a pitchless rasp in a mid-voice which emerged to barely audible sweetness in the higher passages of “Comfort ye” and “Ev’ry valley.”

When sounds fails one in the concert hall, the mind is left to wander.

Under the circumstances it is difficult to make any assessment of conductor Mills’ contribution to the program. I do think it is justified to question the judgment which allowed such a drab exhibition to be presented as a celebration of the season.

Roger Downey
Born in Canada moved to Peru's altiplano at the age of six; came to the U.S. at 10 to discover that you don't use your feet to dribble the ball. Learned from the git-go that "America" is an idea, not a place.
Previous article
A “Puget Sound” Style of Architecture? Here’s where it came from
Next article
Remembering Author Charles Morris, a Master Revisionist