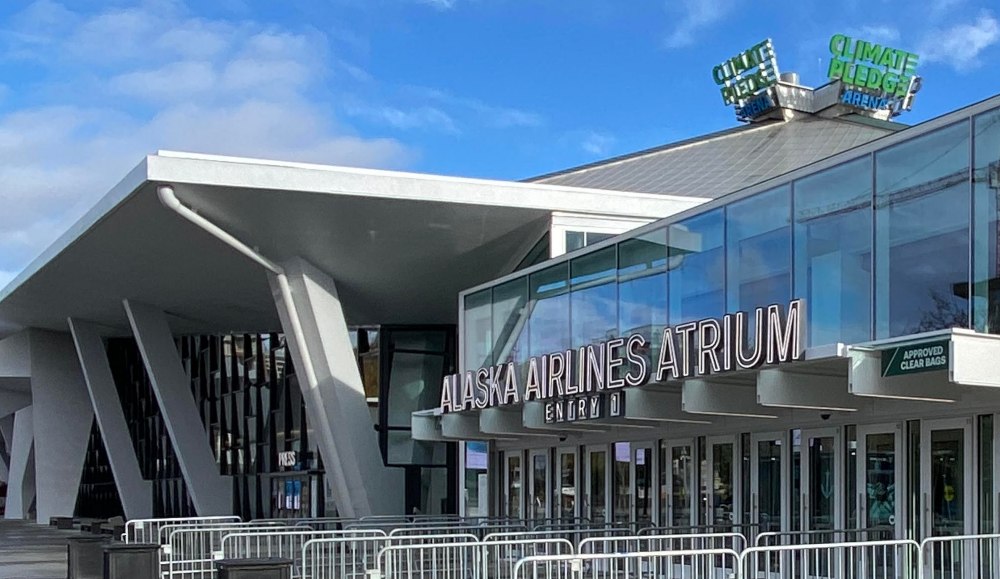 When Seattle launched a new NHL ice-hockey team, the Kraken, this autumn, it also uncorked a billion-dollar makeover of a 1960s architectural landmark. The new owners say it’s the world’s first and only carbon-neutral major sports arena.

The upgrade has turned KeyArena in Seattle Center — former home of the Sonics, the NBA team lost to Oklahoma City over a decade ago — into a showcase of green technology and digital wizardry now called the Climate Pledge Arena. Home-grown online retail giant Amazon bought the naming rights in 2020 for an undisclosed sum but didn’t slap its own name on the building.

The “pledge” in the name means the facility has signed on to The Climate Pledge, a global initiative whose signatories commit to net-zero carbon emissions across their businesses by 2040. When Amazon became the first signatory two years ago, founder Jeff Bezos said the company was “done being in the middle of the herd on this issue” and would use its size and scale to make a difference. The jury is still out on whether the name is a sign of corporate humility, environmental citizenship, or greenwashing. The data will decide.

It’s all set to make the old arena, Oak View says, into the first event venue to be a net-zero energy user, certified by the Living Future Institute.  The design team says it will set a new standard, meaning it will generate no waste from operations and events, and use 100 percent renewable electricity. Some of this will be measurable immediately, like power from a solar array, thanks to new technology. Some will take more time, like weighing trash and counting car trips displaced by public transport.

Originally designed by modernist master Paul Thiry as Washington State’s futuristic pavilion for the 1962 World’s Fair, the arena was declared a Seattle Landmark in 2017 and listed on the Washington Heritage Register and the National Register of Historic Places in 2018. So the renovation has also contended with the challenge of honoring aspects of the original architecture.

Compromises have been made. Thiry’s imaginative “hyperbolic parabaloid” roof hung on tension cables with no interior supports. But to expand the space and meet criteria for pro basketball in the 1990s, that roof was lifted and replaced on an enlarged base. A similar strategy almost doubled the size of the arena to meet today’s needs. The same roof now supports a topknot sign and solar panels which help power the venue. Rainwater from the roof is collected in an underground storage tank and used to make what the designers call “the greenest ice in the NHL.” Familiar branching and slanting concrete columns still support the roof, but with even more cement and signage around the building.

Extending from the south side, a new glass-walled Alaska Airlines Atrium is surrounded by ample plaza space. As if mimicking airport security lines, entry doors to the Atrium face a huge array of screening stations. Along ramps descending into the depths of the arena, planted walls and digital screens scream G-R-E-E-N. The national design team for the project, Populous, has made the building type a specialty.  More like a museum than a stadium, Climate Pledge Arena presents an abundance of glass, layers of security, and allusions to underground spaces like I.M. Pei’s 1980s largely subterranean glass pyramid addition to the Louvre in Paris.

The $1.15 billion cost of the project represents a major commitment by the owners to Seattle’s Uptown neighborhood, lower Queen Anne, and Seattle Center itself, home to the city’s emblematic Space Needle — another survivor of the world’s fair. That’s more than the entire $739 million budget for the development of Seattle’s urban waterfront. Before you accuse your elected officials of shortchanging the rest of us, remember: Climate Pledge Arena was transformed with mainly private funds, and the City of Seattle is just a partner.

Now open and running COVID-adapted events with an 18,000-seat capacity (or up to 17,100 for hockey), Climate Pledge Arena pushes the cause of sustainable construction in two major ways: education and experimentation. It seems calculated to draw young, educated fans, like the ones who work for Amazon and others in South Lake Union. They’re international, tech-savvy, and comfortable with recycling bins as well as programming. Seattle’s tech workers will also need their six-figure salaries to afford the venue’s tickets ranging into the hundreds of dollars, and beer at $15-16 a pop.

The facility is supersized compared with the old KeyArena, and screens are everywhere. “It’s a little more in-your-face than other arenas,” said Jason McLennan, former director of the Living Future Institute, who worked on the project as a private consultant for sustainability.

From owners and sponsors to vendors and concessions, the new arena will function as a laboratory for brand experimentation. Moët et Chandon Imperial Lounge is one of many clubs, suites, and bars inside, some fully visible from outside.

Ubiquitous screens provide directions, maps, and other information to the arena’s thousands of sports fans and concert-goers as well as revenue-generating brand opportunities for businesses. In all, it contains 28,175 square feet of digital signage, which the designers say is some kind of record.

The Climate Pledge brand itself reigns over all, from the rooftop to the newly excavated depths of the arena, where visitors encounter growing plants and scenes of nature on screens. At some point, those same screens will display the data now being generated by the solar array, plus other markers of sustainability, according to McLennan. Look in those numbers for trash saved from landfills and water harvested from the roof. It’s a home-grown concept, based on examples at the Bullitt Center, a green-roofed office tower in Seattle with screens on the walls and wastewater tanks in the basement.

But Climate Pledge Arena is not just a showplace for corporate citizenship. It’s also a place to test innovations in commerce. Food retailers inside use Amazon One’s palm-scanning technology, which relies on biometrics to let customers enter and pay with a wave of a hand.

In a not-so-subtle reference to our imperiled planet, colors wash the arena’s new walls. Light blue on the top level is for atmosphere. Muted orange at the main concourse level suggests a warm earthy surface. To put an even stronger point on the brand, a 200-foot-long green wall with growing plants and LED lighting beckons visitors to stop for a photo. At a Nov. 6 Eagles concert, fans lined up for selfies in front of this lush backdrop called the “living wall.”

Speaking of concerts, the ownership group aims for the arena to be a major concert venue. Oak View CEO Tim Leiweke told the Seattle Times this spring that the Pledge would be “one of the world’s top ten music venues.” Based on a first concert experience, the acoustics are impressive, the sightlines excellent, and the stage technology spectacular.

In addition to the Kraken, Seattle’s pro women’s basketball team, the Storm, will return to the arena in 2022 after four years away during the renovation. And the arena’s owners have lingering hopes of landing another NBA team for the city, though media have been skeptical of the prospects.

Climate Pledge Arena seems uniquely Seattle. From the name to the high-tech systems, it plants a flag for sustainability by acknowledging climate change, a planetary emergency still denied by much of the nation. While soaring ticket and food-and-beverage prices may make it a playpen for the wealthy, the new facility is not just a fairground vision or a corporate branding tool. It’s also a bold step toward a city of the future.

If it helps revitalize Seattle Center and raises public awareness about the perils of climate change, it’s a win for Seattle and the world.

Clair Enlow
Clair Enlow is a freelance journalist writing about architecture, planning and history. She’s a Loeb Fellow and an honorary member of AIASeattle.
Previous article
New Book Argues that our Approach to Homelessness Won’t Work
Next article
Roadmap: How Trump Plans to Ensure a 2024 Win