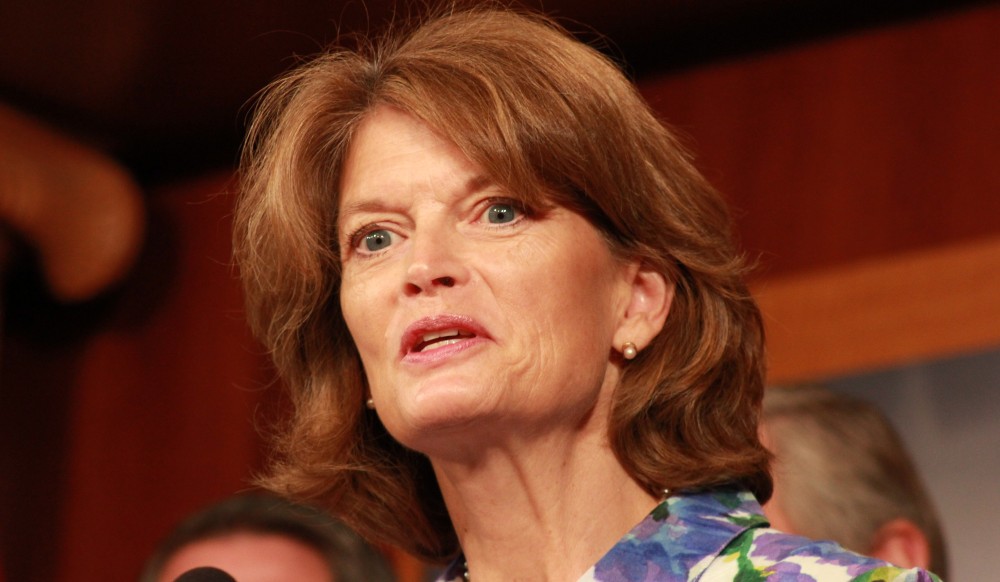 Sen. Lisa Murkowski, R-Alaska, up for reelection in 2022, has retooled the theme. She is now attacking Donald Trump and his operatives, who’ve vowed to defeat her next year. Murkowski’s warning: “lower ’48 outsiders are going to try to grab Alaska’s Senate seat . . .  They couldn’t care less about your future.” She adds, “Plenty of people on the outside . . . will be gunning for me, who will suggest that I am not right for Alaska: I will put that directly to the people of this state,” she told reporters in Juneau, announcing for reelection.

Murkowski, 64, is the lone GOP Senator who voted to impeach Trump and now is facing home state voters next year. The moderate Republican has long been in trouble with the far right.  She lost the 2010 Republican primary to Tea Party candidate Joe Miller but mounted an historic write-in campaign to beat him in November.

She is going to be formidable, in part because Murkowski is the state’s go-to provider. She’s senior on the Senate Appropriations Committee and a former chair of Senate Energy and Natural Resources. She was part of the bipartisan group that put together the infrastructure bill that President Biden will sign at the White House on Monday.

“People understand they have a person that understands Alaska and has Alaska in her blood and in every part of her veins and every morsel of her body,” Sen. Joe Manchin, D-West Virginia, who succeeded Murkowski as Energy and Natural Resources chair, said in a joint interview earlier this year.

The 92-mile road across Denali National Park had to be closed at mile 42 in late August. Due to melting permafrost, the road was sinking several inches a day.  Murkowski is the person counted on to deliver federal money to repair and reroute the road, which leads to epic views of North America’s highest peak.  (Murkowski championed replacing Mt. McKinley with Denali, a native term meaning “the high one.”)

Murkowski has made common cause with Sen. Maria Cantwell, D-Wash. The two Senators have clashed on oil drilling and mining issues, but they have teamed up to champion construction of new heavy-duty Arctic icebreakers, and helped fashion the 2020 Great American Outdoors Act, which gave permanent life and resources to the federal Land and Water Conservation Fund.

Politics in Alaska is rough, retail, and backstopped by powerful interests.  Murkowski and her husband Verne Martell are regularly approached at Costco in Anchorage by constituents with opinions to unload. She also spends lots of time in native villages. The Senator has been known to run the cash register for son Matt Martell, who sells pasta at a farmers’ market near the Anchorage airport.

When the write-in campaign was mounted in 2010, influential Alaska native corporations threw support to Murkowski.  Normally Democratic teachers’ unions donated big bucks.  Big oil was on board. Murkowski has been a reliable ally of the petroleum industry and has long fought to open the Arctic National Wildlife Refuge to oil and gas leasing. A statewide campaign was mounted so people would know how to write Murkowski’s name on the ballot, complete with T-shirts featuring a bovine “kow” and a “ski,” meant to help pronounce her name.

A Trump-backed challenger, Kelly Tshibaka, a former head of the Alaska Dept. of Administration, has been in the field for months. She has labeled Murkowski “Biden’s chief enabling officer” and accused the incumbent of “going against President Trump, whose policies were the best that Alaska has ever known.” Alaskans are “fed up with her,” Tshibaka said when Murkowski announced her reelection bid.

The Murkowski reelection campaign has split the Republican Party.  The Alaska Republican Party censured her last January, when Murkowski voted to convict Trump at his impeachment trial and said after the U.S. Capitol insurrection: “I want him to resign. I want him out. He has caused enough damage.” The Alaska Republican State Central Committee has since endorsed Tshibaka, and a Tshibaka fundraiser is planned for Mar a Lago early in 2022.

But Murkowski is running with support from the National Republican Senatorial Committee and Senate Minority Leader Mitch McConnell, R-Kentucky. She has received money from McConnell’s PAC. McConnell said recently: “She’s a remarkable politician.  Other than Strom Thurmond (in 1956) she’s the only person in American history to win a write-in.”

Murkowski has deep roots in the Republican Party. Her father, Frank Murkowski, served 22 years in the Senate before being elected Governor of Alaska in 2002.  The elder Murkowski appointed his daughter to fill out his term.  (Gov. Murkowski was upset by Wasilla Mayor Sarah Palin in 2006. The Murkowski-Palin family feud lives on to this day.)

Lisa Murkowski enters her reelection campaign with $3 million in the bank, and a PAC called Alaskans for Lisa ready to spend “independently” to support her.  She is, however, also banking on a recent change in Alaska’s election laws, shifting to ranked-choice elections. The top four primary election vote getters advance to the November ballot, regardless of their party affiliation.  Gone is the sort of low-turnout partisan primary in which Joe Miller upset Murkowski in 2010. Democrats have yet to field a Senate candidate for 2022. Democratic and independent voters will again likely make up part of Murkowski’s support.

With Murkowski, there’s no backing down.  As House Republicans attacked the infrastructure bill last week, she returned fire: “Those who are pushing back and saying that a Republican cannot support this measure have not looked at what this legislation is going to do for this country.”