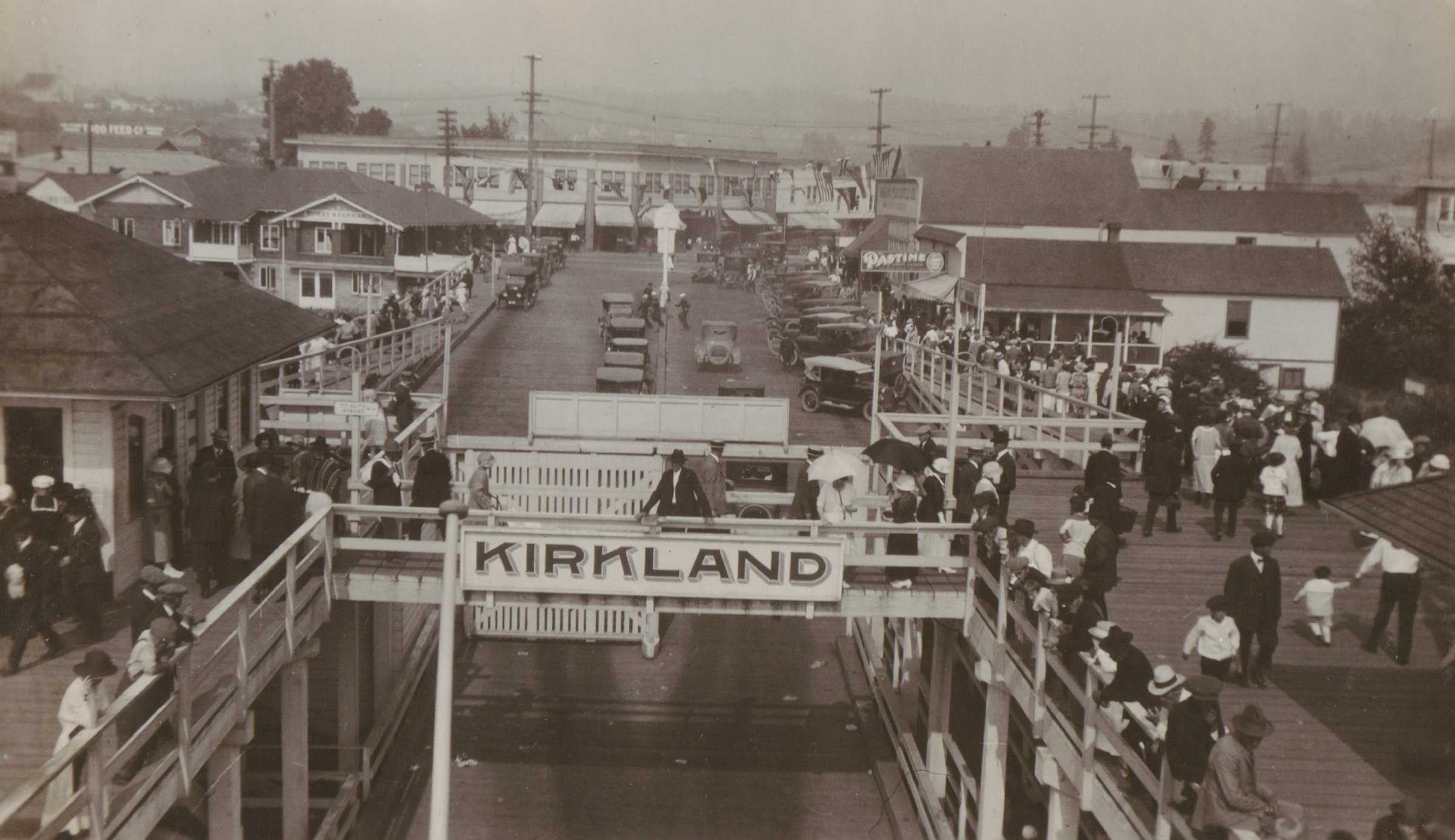 Before it was Kirkland…

Modern Kirkland is often compared to the trendy San Francisco suburb of Sausalito.  Both front large bodies of water and both view spectacular cities and are connected to them by dramatic bridges.  And both have shadowy native pasts, though traveling the bridge to Kirkland’s deep past is long and arduous.

Natives lived in the Kirkland area before the appearance of Lake Washington, 12,500 years ago, when fresh water (largely from the Sammamish River) filled the former arm of Puget Sound. Kirkland’s near neighbor, Redmond, has an older archaeology, as a human settlement has persisted there for at least 10,000 years, an occupation exceeding that of Jericho in ancient Palestine and stretching back 650 generations. (Western settlement does not exceed 11.)

We are not likely to find such antique sites in Kirkland because of the lake’s inexorable rise.  If we find antecedents of historic lake villages, they will be underwater.  Absent archaeology, understanding how early Lake people lived relies on environmental evidence.  The world immediately after the retreat of the glaciers was warmer and dryer than now. Megafauna like mammoths, mastodons, giant ground sloths, reindeer, bison, and tortoises were abundant, but most were probably hunted to extinction by nomadic bands roaming windy grasslands.

Around 5,600 years ago, the cataclysmic eruption and summit collapse of Mt. Rainier altered the southern Puget lowland, filling in much of the old White River valley.  An even cooler, wetter climate saw development of geographical identities: Saltwater people, River people, Inland people, and the Lake people. To penetrate marshes, Lake people developed sharp-nosed hunting canoes whose users grabbed hold of vegetation on each side and pulled the craft forward.  Duck hunters snagged birds with an underhanded toss of a multi-pronged spear.

Other hunters put wooden plugs on arrow shafts and knocked colorful birds out of trees.  Their downy skins cured and cut into spirals were wrapped around yarn and woven into exquisite feather capes and blankets.  Others of plant cotton and mountain goat or dog wool were beautiful and durable, as was Native basketry.

Unlike their river cousins Lake people operated fish-catching pens in shallows and fence weirs on tributaries not affecting upstream groups.  Landlocked Sockeye (also called Kokanee, an interior Salish name), were flavorful and easily preserved and so became highly favored by the River Duwamish, the Suquamish on western Puget Sound, and the Snohomish further north, all of whom intermarried with Lake people to access their fishery.  Lake people also cultivated wapato plants, Sagittaria latifolia, in luxuriant shallow-water gardens.

Lake people were a close branch of the Duwamish.  Of 14 winter villages around the lake, the Kirkland area had two: Tabtabiux (Tahb tahb BEE yookh) at Juanita Bay, with a medium-sized longhouse measuring 50 by 100 feet; and Sa’tsakalh (SAH tsah kahlh), having three such longhouses on Mercer Slough.   Each longhouse sheltered three to five families or about 25 to 35 people.

Lake people were intelligent, vigorous, humorous, gregarious, and vital conversationalists in their richly allusive tongue. They were educated, knowledgeable, and skillful.   Anyone could survive in the rich landscape, but these people aimed to flourish, to gain illustrious  names, and sustain generations.

They were busy shaping their natural environment over millennia.  They burned the forest repeatedly to keep space enough between immense trees for sunlight to nurture herbage on which large quadrupeds grazed.  They cultivated the broad parkland.  A fishery whose abundance dazzled early white settlers had been managed successfully for thousands of years.

Around 1,000 years ago, the Lake people suffered an immense catastrophe.  In fall or winter, a shallow and tremendous earthquake along the Seattle Fault bisecting the lake sent huge, forested sections on its shore plunging into the lake at three sites, one just north of Kirkland.  This generated terrific seich (standing) waves that oscillated between the narrow lake’s shores and destroyed most of the people.  Survivor descendants reciting the deeds of the hero Siso´bšid (see SOHB sheed) told how he and his brothers barely defeated terrible sucking and shadow monsters that obliterated the world.

When American settlers arrived on the lake, they saw a pattern emerge among native people, as was observed elsewhere.  Ethnographers like J. P. Harrington and T. T. Waterman, who recorded lists of native place names in the early 20th century, did not identify a winter village at Kirkland.  However, in Duwamish et. al., Tribes of Indians. V. U.S.A., a case filed at the U. S. Court of Claims in 1926, Duwamish witnesses testified under oath that a village of three medium-sized longhouses stood there.

Traditional winter villages had local names, but this was simply the “Kirkland” village, and it seems to have appeared shortly after the first settlers arrived. The Popham-McGregors, French, and Curtis families settled in the early 1860s, and native people from several house sites relocated there to sell food and labor.  This echoes the pattern at Olympia in 1850 when Chief Seattle brought 200 of his Duwamish south to Budd Inlet, and when the Denny-Boren-Bell party showed up at Alki Point in 1851. It happened in early Renton, at Newcastle, “Fleaburg” (Leschi), and at Union Bay and Lake Forest Park.

Homesteaders valued the land where longhouses were located. Soon, land claims  proliferated and claimants drove native inhabitants away.  The Kirkland “village” was ephemeral, but three houses appear next at Bellevue and at Mercer Slough.  The sturdy kinship structures that enabled River and Inland groups to retain cohesive identities do not appear to have sustained the Lake people.  By the 1870s, they disappeared, merging into groups they had intermarried with at the Port Madison (Suquamish) and Tulalip (Snohomish River) reservations.

But some Lake people returned annually to collect lake resources as they had for thousands of years.  Settlers recall their gatherings at Juanita and Yarrow Bays to harvest wapato and trade with white inhabitants, who remembered them as earnest businesspeople.  Their resilience and good humor show up in pioneer recollections.

At early Houghton, a lumbering settlement preceding Kirkland, native people camping at Yarrow Bay strode unannounced into the Kirtley family kitchen to trade fish and clams.  At Juanita Bay, after the Tabtabi´ux winter village’s demise, a group of native women tried to get into the house of Mrs. Del Forbes (after whom Forbes Lake is named) when she lived alone there.  The Native women only wanted to warm their bare feet by her fire.  In late fall and winter Native women waded into frigid shallows to lift wapato corms from bottom muds by wiggling them free with their toes.  With their longhouse gone, they needed to warm their chilled legs.

At early Houghton, a lumbering settlement preceding Kirkland, native people camping at Yarrow Bay strode unannounced into the Kirtley family kitchen to trade fish and clams.  In traditional society anyone was welcome anytime at a house, but the practice unsettled many whites and terrified the family’s 14 year-old daughter.  Her grandson recalled: “they got a big kick out of that; they just laughed at her. They found it so funny that she was afraid of them.”

Native people continued to fish and gather on the lake until 1916 when lowering the lake wiped out spawning steelhead and wapato.  A withering natural world could no longer sustain traditional life.  Yet in the 1920s, a young Gary Snyder remembered the Indian who stopped by his family’s Lake City dairy to sell freshly caught fish out of the back of his pick-up.

Today, the City of Kirkland seeks remembrance of that vanished world and its people — perhaps their descendants — who live among us yet.  How remarkable to greet again and learn from them about their ancient world, new to us.  In Shakespeare’s The Tempest, Miranda exclaims:

Oh wonder!
How many goodly people are there here!
How beauteous mankind is:
Oh brave new world
That has such people in’t.