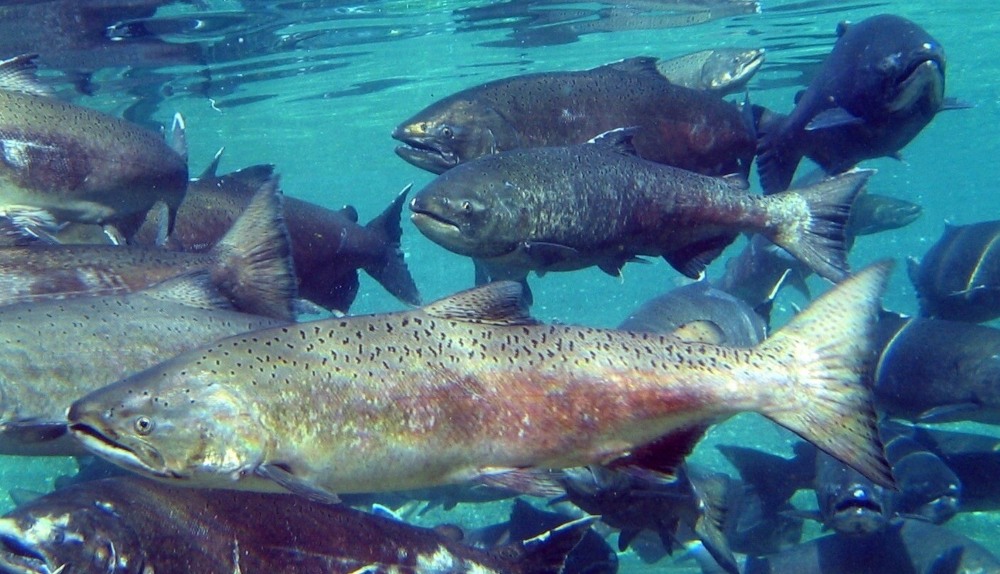 If you’re an orca, you may turn your nose up at Chinook salmon produced in hatcheries. (“You call that a fish?”) Likewise, if you’re the state of Washington, you’re ignoring law and science to flood Puget Sound with hatchery salmon in the name of saving orcas.  These are two big takeaways from a lawsuit filed recently against the state by Wild Fish Conservancy (WFC) and The Conservation Angler.

To review: Southern Resident Killer Whales — the name under which Puget Sound orcas appear on the federal endangered species list — are critically endangered.  They’re at best near and possibly past the point of no return.  Whatever else has brought the population down below 75 animals — fewer orcas than when the population was listed as endangered in 2005 — scientists have known for some time that orcas are not getting enough to eat.  Unlike the Northern Residents, which also show up in and near Puget Sound, Southern Residents don’t eat seals and other marine mammals. They eat fish.  Salmon.  Chinook salmon.  They will eat other kinds of salmon in a pinch, but mostly they dine on Chinook.

The reason seems clear: Chasing your supper through cold salt water takes a lot of energy.  If you have to choose between a relatively small lean fish as the payoff for your investment in energy and a big fatty one, which will you pick?  Right. Chinook are the largest and fattiest salmon variety.

There are, of course, non-threatened hatchery-spawned Chinook salmon, too.  The orcas can eat them, but do they want to?  That gets back to the substance of the WCF lawsuit. The WFC petition argues that the state task force that recommended an increase in hatchery production “did not cite to any scientific evidence to support its assumption that Southern Resident killer whales would eat hatchery fish, given that the killer whales have evolved to eat older and larger Chinook salmon, which hatcheries have failed to protect or restore.”

When a Chinook spawned in Washington, Oregon, or Idaho rivers gets out into the Pacific, it hangs a right and heads north along the coast of British Columbia to the water off Southeast Alaska.  Chinook spawned in British Columbia’s Fraser River or other rivers in mainland B.C. or Vancouver Island do the same.  Some Chinook from the American Northwest are caught by Canadians fishing off the coast of British Columbia.  U.S. and Canadian Chinook that arrive off southeast Alaska are caught offshore by commercial trollers and recreational fishers.  Only 3 percent of the Chinook caught by trollers in southeast Alaska are spawned in Alaska. The rest come from states and provinces farther south.

Chinook aren’t the only fish that cross borders.  The Fraser River Sockeye salmon runs — which have always supplied the bulk of the “Puget Sound” salmon fishery — split, some heading north between Vancouver Island and the mainland, others swimming west through the Strait of Juan de Fuca. Some of those Fraser River Sockeyes are caught by Washington fishermen in the Strait and the northern Sound.

The Pacific Salmon Treaty between the United States and Canada, first signed in 1985 and renewed most recently in 2019, codifies the division of these nomadic fish.  Essentially, the U.S. negotiators have traded access to the Fraser River Sockeye runs — and Alaskan access to Chinook spawned in Canada — for Canadian access to northward-bound Chinook.

What all this means to salmon and orcas depends on whom you believe.  A Biological Opinion (BiOp) issued by the National Marine Fisheries Service (NMFS) was completed after the Treaty had been renegotiated. That Opinion examined the troll harvest plan for salmon in southeast Alaska. In it, NMFS’s own staff acknowledged that the planned fishery would hinder the recovery of endangered Southern Resident Killer Whales.

But this would not be a problem, the BiOp concluded, since the harvest plan wouldn’t jeopardize the survival or recovery of either the Southern Resident Killer Whales or the various listed Chinook salmon species caught off southeast Alaska.  The reason not to worry: hatcheries would just pump out more fish for the orcas to eat.

The fate of the orcas rested on this program of “mitigation” —  often the last refuge of an environmental scoundrel.  The mitigation would depend on targeted funding for which there were neither guaranteed targets nor guaranteed funds.  WFC sued over this BiOp last year, alleging violations of the Endangered Species Act (ESA), the National Environmental Policy Act (NEPA), and the Administrative Procedure Act (APA).  Last month, United States Magistrate Judge Michelle Peterson recommended granting summary judgment to WFC on all those points. That was merely a recommendation to the federal judge overseeing the case, rather than a final ruling, but Peterson came out unambiguously against the feds.

[“T]here is no support in the administrative record that the NMFS’s mitigation contains ‘specific or binding plans’ nor that it is under NMFS’s ‘control or reasonably certain to occur,’” Peterson wrote on September 27.  “The mitigation identified in the 2019 . . .  BiOp does not meet the Ninth Circuit’s standards [but] was relied upon by NMFS. . . to reach its no-jeopardy findings for the [Southern Resident orcas.] Additionally, NMFS’s failure to make a jeopardy determination on the prey increase program for the Chinook salmon . . . violated its procedural obligations under the ESA. The . . . BiOp was arbitrary, capricious, and not in accordance with law.” Peterson added that “NMFS violated NEPA in adopting the prey increase program without preparing [an environmental impact statement or an environmental assessment.]”

Now, Peterson’s opinion goes to the U.S. District Court judge in charge of the case.  Meanwhile, the fishing goes on.

NMFS’s somewhat pie-in-the-sky reliance on hatcheries is nothing new.  That kind of reliance has a long history: Not enough salmon?  The preferred solution, ever since the 19th century, has been to crank out more and more of them from hatcheries.  As the WFC petition says, “[f]or much of their history, hatcheries were seen as a cure-all.”

Somehow, booming hatchery production — Washington’s own hatcheries crank out tens of millions of Chinook — hasn’t prevented or halted the salmon’s decline.  But it has provided fish for the short-term profit of commercial fishers, both tribal and non-tribal, and for recreational anglers.

Washington allegedly has more hatcheries than anywhere else in the world, some 140 of them, run by the federal government, the state government, and various tribes.  The Washington Department of Fish and Wildlife (WDFW) operates 83.  Everyone has known for many years that the presence of hatchery salmon makes it less likely that wild salmon — specifically adapted to their river systems and carrying the species’ genetic diversity —  will survive. Hatcheries are counted as one of the “4 H’s” — along with hydro [dams], habitat [loss], and harvest — that have driven salmon populations toward extinction.

Hatchery fish may have less genetic diversity and therefore less resilience than wild ones, and if they crowd the same streams at the same times, they can hog most of the food and space. If they mate with wild fish, they can dilute the wild gene pool. And if they hang out in the same places away from streams, fishers targeting the more numerous hatchery fish may catch theoretically-protected wild fish, too.

The reasons why politicians cling to hatcheries — to the hatchery industry, as it were — are no mystery. Producing more hatchery fish is a lot easier than solving the salmon’s other problems.  Politicians (and most environmental groups) try not to antagonize commercial and recreational fishers.  Orcas don’t vote.  Neither do wild salmon.  Politically, the path of least resistance points toward hatcheries that crank out more fish.

That politically convenient path has recently gone through some recent twists and turns before returning to its well-worn course.  In 2000, a year after Puget Sound Chinook were listed as threatened, Congress created the Hatchery Scientific Review Group (HSRG) to recommend strategies for reducing the risks that hatcheries posed to wild fish.  The state modified its hatchery policies in 2009.

Then came the burst of concern about the fate of orcas.  Gov. Jay Inslee convened a Southern Resident Orca Task Force.  In 2018, the task force recommended a number of reforms, including protecting and improving habitat for Chinook salmon and the forage fish that the salmon eat. It also recommended sharply increasing hatchery production. The state Fish and Game Commission decided to revise the hatchery policy.  Now, WFC and The Conservation Angler have sued.

Among other things, these groups ask the courts to “[i]nvalidate the [WDFW’s] 2018 Hatchery Expansion, the Orca Prey Initiative, the 2019 [hatchery] Expansion Plan, the 2021 [hatchery] Expansion Master Plan, and the 2021 Hatchery Policy.”  They also ask to enjoin any action taken under any of those policies or plans and to declare those policies and plans invalid unless Washington’s Department of Fish and Wildlife complies with the State Environmental Policy Act [SEPA].

WFC argues in its petition that the state considered too narrow a range of options for helping orcas survive.  “While the [Southern Resident Orca] Task Force supported full implementation of the 2019-28 Pacific Salmon Treaty,” the petition says, “it did not consider the possibility of seeking to decrease the number of migrating Chinook that the treaty allows to be harvested in the fisheries off southeast Alaska and northern British Columbia. Similarly, the report did not address the danger that increased hatchery production would trigger automatic increases in the Chinook catch allowed under the Pacific Salmon Treaty, thus resulting in increased fishery mortality of wild Chinook, and a decrease in the Southern Resident’s preferred prey.”

Kurt Beardslee, co-founder and Executive Director of the Wild Fish Conservancy, says that the federal government’s OK of the southeast Alaskan troll fishery and the state government’s decision to go all in on hatcheries are more than related; they’re “joined at the hip.”  He suggests the Task Force should have considered “what benefit would accrue from decreasing or eliminating the troll fishery in southeast Alaska?  Would it make sense to subsidize the fishers [whose income would be reduced by restricting the troll fishery] with the money that we’re using for hatcheries?”

“Finally,” the lawsuit says, “the Task Force report failed to discuss recent science suggesting that the billions of hatchery salmon already released into the North Pacific every year were consuming the limited resources that wild Chinook needed to recover.”

Beardslee suggests that task force members might have started by asking, “by the way, is this legal and is it scientifically credible?” Instead, he sees the state doubling down on an old panacea that hasn’t worked in the past and won’t work in the future.  “There’s only one solution for every problem,” Beardslee says.  The state has chosen “basically business as usual but more of it.”

But the time for business as usual — which obviously hasn’t saved either Puget Sound orcas or wild salmon — has pretty well run out.  “We really can’t afford another great blunder,” he says.

Dan Chasan
Previous article
Bubble Trouble: How Seattle’s Radical Left Grew and (Predictably) Got Whupped
Next article
Are We Asking the Wrong Questions About Homeless Encampments?