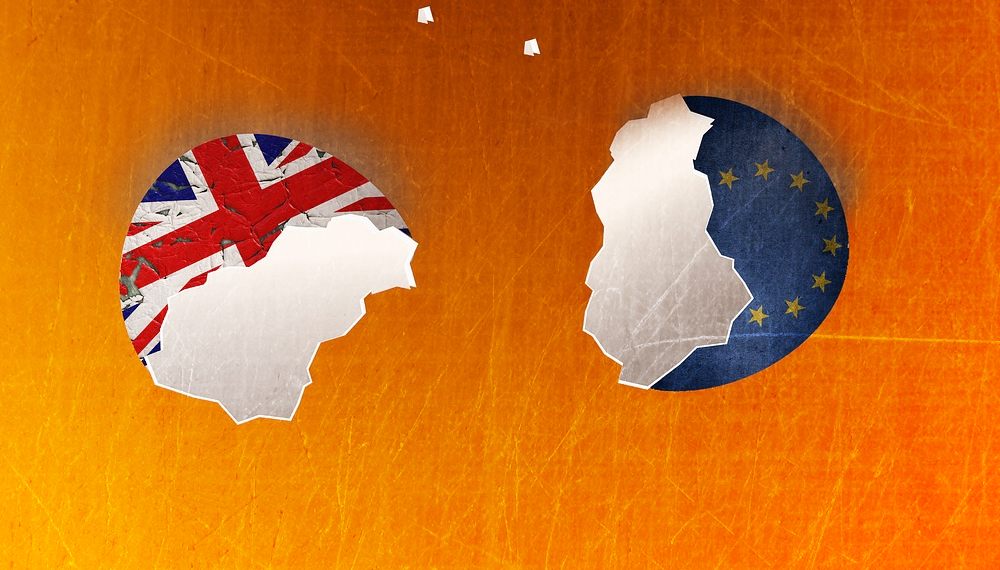 Still Picking Up the Pieces After the Brexit Break

Britain’s divorce from the European Union was supposed to be final at the end of 2020. But as with breakups between spouses, the former alliance partners are mired in an acrimonious blame game and conflict over how to divide assets long after signing the Brexit paperwork.

Conflicts over EU trade with Britain’s Northern Ireland province are also straining post-Brexit relations and threatening a return to the violent era of “The Troubles” that was calmed by the 1998 Good Friday Agreement that has since maintained a tentative peace.

Britain’s economic watchdog agency, the Office for Budget Responsibility, forecasts a 4% contraction of GDP for this year due to the trade and travel impacts of Brexit, on top of a 2% decline expected from a second year of COVID-related disruptions. Britons now tell pollsters that the consequences of Brexit are their greatest concern, overtaking the COVID pandemic that was previously uppermost in the minds of the country of 67 million residents.

Post-Brexit pressures on Britain have been intense in the wake of the Covid-19 crisis. Lapsed visas for foreign truck drivers, butchers, home health care workers and others who left the country after its EU labor agreements expired have inflicted more disruption on supply chains and worker shortages than in the 27 EU countries still collaborating on recovery from the global pandemic.

Tensions between Johnson and Macron spilled over into the past weekend’s summit in Rome of the Group of 20 wealthiest nations. At the traditional assembly of leaders for a “family photo” on Sunday, the British and French leaders greeted each other in silence and raised their fists for a bump that looked more like putting up their dukes for a brawl. If it was intended to make light of their recent hostilities, no one on the stage appeared to be amused.

A 30-minute meeting Sunday morning between Johnson and Macron also did little to lower the temperature between two of Europe’s most influential leaders going into a consequential global gathering on climate challenges in Glasgow, Scotland.

Johnson, as host of the climate summit of nearly 200 nations, alluded over the weekend to the risk of the fisheries conflict distracting summit delegates from the urgent task of pledging drastic carbon reductions and $100 billion in annual G20 spending to achieve an elusive goal of halving fossil-fuel emissions by 2030.

At a press conference concluding the G20 meeting, Johnson asserted there were “no compelling excuses for procrastination” in the imperative to halt climate change already ravaging the planet with droughts, wildfires, inland flooding and rising oceans.

While both French and British sources told journalists in Rome that the one-on-one meeting of Macron and Johnson elicited expressions of hope that the fishing dispute could be “de-escalated,” their spokesmen later made clear each blamed the other for the caustic state of relations.

“It will be for the French to decide whether they want to step away from the threats they have made in recent days,” Johnson’s spokesman, Max Blain, told reporters. He accused France of escalating the conflict with its seizure last week of a British scallop harvesting trawler off the port of Le Havre and threats to conduct more rigorous checks on British fishing vessels in the English Channel.

Clement Beaune, French Minister for European Affairs, accused Britain of  “targeting” France for political reasons in a breach of the Brexit deal on phasing out EU licenses.

“For the EU as a whole, around 90% of the expected licenses have been granted, but all the missing ones are French,” Beaune tweeted.

Britain’s withholding of French anglers’ licenses to fish in waters where they have traditionally operated is believed to be an attempt by Johnson’s government to change dispute resolution procedures that give the European Court of Justice the power to mediate conflicts, in particular implementation of the Northern Ireland Protocol. Fisheries account for only 0.02% of British GDP, while the consequences for British exports to Northern Ireland and the Irish Republic have been severe.

The Northern Ireland Protocol averted the reimposition of a hard border — customs checks and cameras — between the British province and the Republic of Ireland, which remains an EU member. By continuing to treat Northern Ireland as a member of the EU customs union when Britain is no longer in it has resulted in a significant reduction of British exports to both parts of the island across the Irish Sea.

Since Brexit, Ireland has reconfigured its cargo and ferry traffic, no longer carrying much freight or passengers to Britain over the Irish Sea. Irish Foreign Affairs Minister Simon Coveney told the BBC last month that 44 direct sea routes are now in operation from Ireland to continental Europe to bypass UK ports in Wales that are now slowed by post-Brexit customs formalities.

Also straining cross-channel relations is lingering resentment in Paris over a British-US deal to build nuclear-powered submarines for Australia to boost Western defenses in the Asian Pacific. The surprise announcement in September of the tri-party collaboration angered and embarrassed Macron, who faces a re-election battle next spring. President Joe Biden met with Macron on the sidelines of the G20 and appeared to have defused the conflict with an important NATO ally, at least on the surface.

During the fractious negotiations on Brexit after a 2016 referendum that saw 52% of British voters back EU withdrawal, economists throughout the bloc warned of trade setbacks and travel complications. French and EU authorities’ reminders of those warnings amid the fishing dispute have further sharpened the diplomatic knives.

In a letter to the European Commission, French Prime Minister Jean Castex argued that Britain’s complaints of post-Brexit economic damage should be seen by the European public as evidence “there is more harm suffered in leaving the Union than by staying in.”

David Frost, Britain’s minister for Brexit matters, took offense at the French government chief’s suggestion that there needed to be obvious pain incurred in pulling out of the EU, a warning likely aimed at movements in Poland and Hungary to escape what their authoritarian-leaning governments see as burdensome rules protecting judicial autonomy, free expression and human rights.

“To see it expressed in this way is clearly very troubling and very problematic in the current context when we are trying to solve many highly sensitive issues, including on the Northern Ireland Protocol,” Frost complained to European journalists.

Macron stood his ground at the weekend G20 interactions with Johnson, reiterating that Britain had until Tuesday to license eligible French vessels to fish in UK waters or face retaliation. That could mean barring British boats from French ports along the English Channel, tightening checks on vessels and trucks carrying British goods into France or cutting energy deliveries to Britain’s Channel Islands, which are heavily dependent on electricity from France.

“The ball is now in their court,” Macron said after his Rome meeting with Johnson, threatening retaliatory action if the fishing license standoff persists. “I would deplore it. But what we cannot do is not respond and not defend our fishermen.”

Carol J Williams
Carol J. Williams is a retired foreign correspondent with 30 years' reporting abroad for the Los Angeles Times and Associated Press. She has reported from more than 80 countries, with a focus on USSR/Russia and Eastern Europe.
Previous article
America’s Guidebooks: The Way We Were
Next article
The “Year of Wise Fools”: Nick Licata and the Rise of Campus Activism