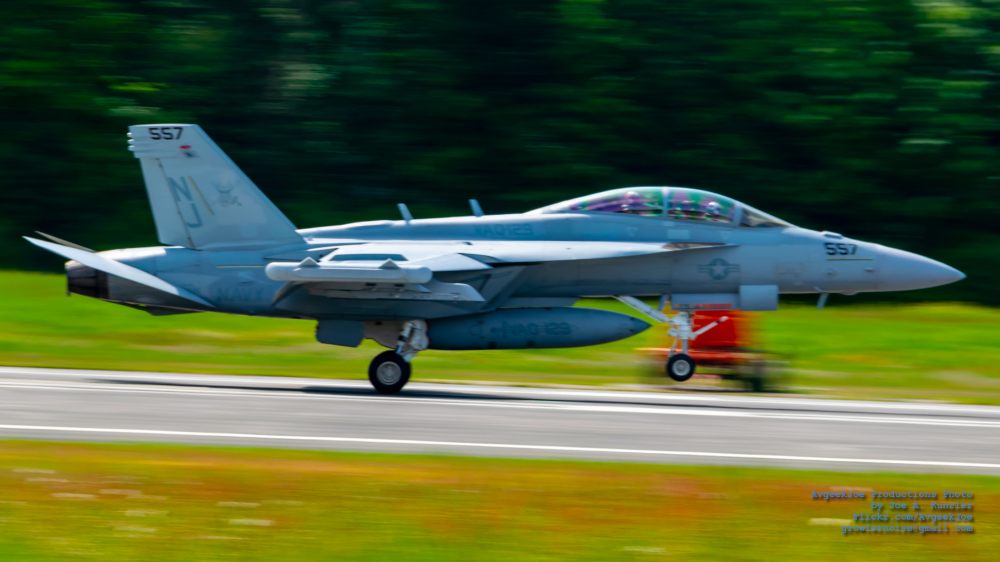 Coupevillle – Attorney General Bob Ferguson chose a bucolic setting for his Whidbey Island fundraiser early Thursday evening, the historic Crockett Barn with its backdrop of Admiralty Inlet and Mt. Rainier majestic in the distance.  The crowd of islanders cheered Ferguson when he referenced suing the Navy over the noise of its EA–18G Growler jets.

As the AG took questions, however, Ferguson was interrupted by a sudden earsplitting roar. A Growler jet passed low overhead.  The jet circled south, made a pass over the Naval Outlying Landing Field, just south of Coupeville, and came around again.

“The Sound of Freedom” was making its presence felt in the presence of an antagonist.  “They usually come overhead in pairs, on occasions as many as four,” host Paula Spina told Ferguson during a moment when she was audible.

Sure enough, a second jet appeared, circling noisily over the Ebey’s Landing National Historical Reserve.  The Growler is designed to fly low to jam enemy communications.  The Outlying Landing Field allows for practice of touch-and-go landings. Two years ago, the Navy approved 12,000 such practice flights, up from 3,000, with aircraft activity and the Outlying Landing Field increasing from 90 hours to 360 hours each year.

The Navy’s less noisy EA-6b Prowler jets attracted a small, vociferous but easily ignored protest. But arrival of the Growlers in 2008 — Naval Air Station Whidbey plans to expand its fleet of 82 Growlers by 36 additional jets by 2022 — has filled Coupeville High School with angry locals, plus contingents from Port Townsend and the Quimper Peninsula.  Friends of Ebey’s Landing was already going to court against the Navy when AG Ferguson stepped in.

The Navy is used to blowing off protests, all the way back to the 1950’s when U.S. Supreme Court Justice William O. Douglas complained that jets bound for the Umatilla bombing range were spooking his horses with low overflights through Cascade passes. It has responded to letters from U.S. Reps. Rick Larsen and Adam Smith, D-Wash.  – Smith chairs the House Armed Services Committee – with bland defenses of its mission.  It has financed a few seismic improvements to historic structures at the national historical preserve.

In the late 1990’s, the federal base closure commission voted 4-3 to shut down Naval Air Station Alameda in California and keep open NAS Whidbey. The rationale was that the island offered less populated land, and more of it, for practice flights.

The Growlers also make a constant aerial commute over the heart of Olympic National Park bound for two Olympic Military Operations Areas on the western peninsula.  In words of Jason Bausher, longtime seasonal ranger at the park, “The selling point of the park is silence but then you hear a Navy jet go overhead and you ask, ‘What the hell?’” Ex-Gov. Dan Evans, who has hiked the Olympics for 80-plus years, has opined: “They ought to keep it (overflights) out of the park.”

Ferguson is a tenacious sort, as the Trump administration found on the losing end of multiple lawsuits.  The AG kept talking during breaks from Growler noise, and inside the Crockett Barn when two jets made the noise level unbearable.  Filed under the National Environmental Protection Act, the state’s lawsuit charges that the Navy’s environmental impact statement ignored the Growlers’ impacts on public health and wildlife communities around Puget Sound.  The state’s case will be heard in court by a federal magistrate next month.

“I would say our odds of success are 50-50,” Ferguson told his supporters.  “The Navy is very difficult to challenge.”

Already, in letters to Reps. Larsen and Smith, the Navy has argued that the Outlying Landing Field is essential by dint of training Growler pilots and preparing them to land on aircraft carriers.  “We have a unique mission: We’re the only one that does it in the world,” Cmdr. David Harris, head of the Electronic Attack Squadron, told MyNorthwest.

The explanation has carried the day to date.  Still, the screeching noise of Growlers passing low over Coupeville and bucolic Ebey’s Landing (a unique unit of the National Park System) is hard to take.  In words of Dan Evans, a Navy vet, “Gosh, people in this area are pro-Navy, but the Navy should recognize that this is a two-way street.”

AG Ferguson held the stage at Crockett Barn, and will see the Navy in court next month.

Joel Connelly
I worked for Seattle Post-Intelligencer from 1973 until it ceased print publication in 2009, and SeattlePI.com from 2009 to 6/30/2020. During that time, I wrote about 9 presidential races, 11 Canadian and British Columbia elections‎, four doomed WPPSS nuclear plants, six Washington wilderness battles, creation of two national Monuments (Hanford Reach and San Juan Islands), a 104 million acre Alaska Lands Act, plus the Columbia Gorge National Scenic Area.
Previous article
What Happens When Your College Uncovers the Deep Dark History of its Namesake?
Next article
Nuclear Sub Deal Pushes US Towards a New Cold War with China