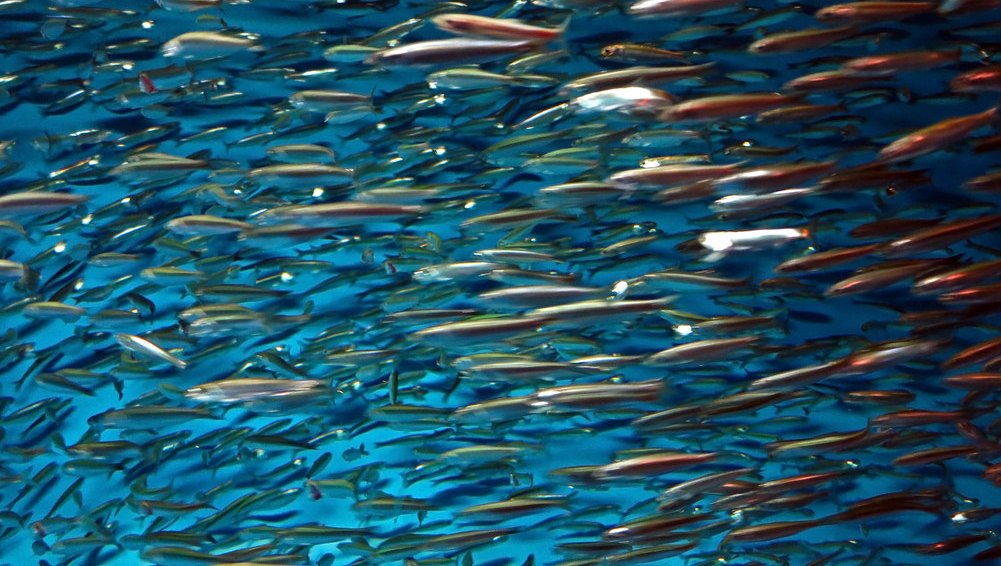 Beneath the Surface: New Book Explores the Hidden World of Puget Sound

Every warm day, I wade into the cold salt water of Vashon’s Quartermaster Harbor, hoping that the anchovies appear.  It doesn’t look like they’ll make it this year.  But when they’re here, I love to see those thousands of little silver fish swirl in the shallow water around my legs.  I always stand and watch them a while before I head out into deeper water to swim.

Most people probably don’t think about anchovies at all, except maybe when declining them as a pizza topping.  Certainly most people to whom I mention my own close encounters with the fish are surprised to learn they live in Puget Sound.  They do, of course, and they’re part of the food chain that supports chinook salmon and, ultimately, orcas.

While David B. Williams doesn’t talk about anchovies in his new book, Homewaters  (University of Washington Press, $29.95), he does talk about other crucial species that don’t get much attention.  He opens readers’ eyes to the complexity of life in the Sound and the complexity of human history on and beside it.

Williams looks beneath the glittering surface of the Sound not only at the problems that lurk there but also at the seldom-cherished species on which the iconic salmon and orcas depend.  Likewise, he looks past  the surface layer of European and European-American history to the millennia of native habitation that may not have had much influence on the dominant political and economic institutions of today, but represent nearly all the human history of this place: The Spaniards, the Hudson’s Bay Company, Lewis and Clark all arrived roughly 300 years ago.  But as he describes it, somebody — we don’t really know who — left stone tools and salmon bones in Redmond 12,500 years ago, somebody evidently killed a mastodon at Sequim over 1000 years before that, and people have presumably been living here ever since.

How did the first people get here?  We don’t know, but he describes the thesis that the first people along this coast came by boat from Asia, following a “kelp highway” along which they knew they could find plenty to eat.  What this all adds up to, historically and biologically, is a lot more complexity than most of us tend to know.  To me, that’s the most valuable lesson of Williams’ book: It’s all complicated.

He makes it clear that some of the organisms we don’t normally think about are every bit as interesting as those few organisms that we do.  (Williams describes going out with researchers who find them interesting — walking across mud flats, shivering on boats — which he clearly enjoys.  And he clearly values their dedication.)  He describes the “kelp forests” underwater, the “baitballs” in which herring and other forage fish gather by the thousands, the sheer mass of geoducks paving the deeps: “[T]he giant clams are arguably the most abundant biomass in Puget Sound — calculated in 2018 to be at least 925 million pounds.”  (This is hands-down my favorite factoid here.)  The kelp and the herring are crucial to the survival of salmon.

Williams talks about the main “forage fish” — herring, sand lance, surf smelt (anchovies are a forage fish of lesser significance in the Sound)  — and their place in the food chain.  One can, of course, look even lower down the chain.   “The most important animals in Puget Sound, as in the oceans at large, are neither the most obvious nor the most beloved,” UW oceanographer Richard Strickland wrote in his 1983 book, The Fertile Fjord.  “They are not the whales, nor the salmon, nor the clams, crabs and octopi. . . .[F]loating freely with the tides and currents, little known and nearly invisible, are the tiny plants and animals of the plankton.  What these animals lack in size and glamour,…they compensate for in importance to all marine life.”

Williams implicitly recognizes this, but his book emphasizes the role of the middlemen — or middlefish — when he calls herring “the conduit through which nutrients from lower-level organisms, such as krill and copepods, pass through the food web to salmon, scoters, seals, and and hundreds of other fish, mammals and birds.”

He also notes that when archaeologists exacavated a midden at Burton, on Vashon Island — right across Quartermaster Harbor from the spot at which I’m not seeing anchovies — they found a whole lot more herring bones than bones from salmon or other fish.  Another reminder of the fact that human society, as well as marine life, was a lot more complex than we tend to assume.

Both explicitly and implicitly, Williams is explaining all this against the background of our current concerns for animals at the top of the Sound’s food chain: the Chinook salmon listed as a threatened species in 1999, the Southern Resident Killer Whales — i.e. the resident orcas — listed as endangered in 2005, and the sad story — which Williams recapitulates — of the orca Tahleqah carrying her dead calf around the Sound for 17 days back in 2018.

Historically, there has been a certain Groundhog Day quality to our repeated but fleeting concerns about Puget Sound.  Who even remembers the short-lived mid-’80s rhetoric about a “year of Puget Sound,” or Governor Chris Gregoire’s brave but implausible 2007 statement that we’d restore the Sound by 2020? This has all been going on for a long time.  Williams talks about the arrival of sulfite pulp mills, the first of which opened at Shelton in 1927.  The mills went in.  The oyster populations crashed.  The connection seemed clear.

But as late as the 1980s — 60 years after the first mills started up — at a public meeting not far from Shelton, I saw two guys — one from an oyster-growing family, the other from a manufacturer of pulp — get into a heated argument about whether or not the mills’ rise was linked to the oysters’ decline.  And while, as Williams notes, the mills disappeared in the 1970s, he also notes that the bills still haven’t all been paid: “As of 2019,” Williams writes, “the Washington Department of Ecology was still sending letters to Rayonier [which had owned and operated the pulp mill at Shelton] requesting a more thorough cleanup of the facility and its surroundings.”

The fact that the Shelton pulp mill opened in 1927 means water quality in Puget Sound has been an issue for nearly a century — well over half the time Washington has been a state.  And things visibly started going wrong well before that.  Williams writes that in Willapa Bay — not in the Sound, but illustrative — the harvest of native Olympia oysters peaked in 1902, and he quotes a state fish commissioner who wrote the previous year that “[u]ntil a few years ago, it was not thought necessary to exercise any care in taking the oysters from the beds.  The supply seemed almost unlimited and it was supposed it would always remain so.”

“Of course,” Williams writes, “it didn’t.”  And the obvious declines went far beyond oysters.  The Puget Sound salmon catch peaked in 1913.  Down on the Columbia, the chinook catch peaked in 1883.  And the handwriting was on the wall even earlier.  The people who made the laws for the Oregon Territory and later for Washington weren’t ignorant.  They knew how people had destroyed anadromous fish runs elsewhere.

Quoting others, Williams points out that somehow the Salish people who inhabited the shores of Puget Sound managed to harvest salmon without obliterating them (or other species) for millennia.  Their culture enabled them to do something right.  But clearly, that cultural awareness wasn’t unique: If northern Euopeans hadn’t had some kind of similar cultural awareness, there wouldn’t have been any salmon left in northern Europe to be largely killed off by the Industrial Revolution.  The people who wrote the first territorial laws here had seen the results of damming millstreams both in Europe and in the eastern United States.

Williams quotes fisheries biologist and writer Jim Lichatowich’s argument, in his book, Salmon Without Rivers (which should be required reading) that “[i]nstead of concerning themselves with ecological processes and relationships, [fishery] managers have instead focused on expanding fisheries and providing fish for sport, commercial, and subsistence interests.”

“Salmon protection has been part of [the political landscape] since the first [Oregon] territorial legislature of 1848,” Lichatowich has said. “We knew since 1875…what was going to cause the collapse [of salmon populations]. We put in all these things to prevent it.”  We didn’t prevent it.  We didn’t try hard enough.  The laws weren’t enforced.   The economic interests in doing things that killed salmon were too compelling.  We talked — and still talk — a good game, but that hasn’t saved the fish.

For most of us that may be a rather abstract problem.  Williams implies that these days, most people have no real personal connection with the Sound.  He suggests that urban salmon streams can help people make personal connections to the salmon and the Sound.  Some people have argued that urban salmon streams provide very little bang for a whole lot of bucks, and they lead people to believe that you can restore fish runs without really restoring fish habitat, pretending that basically a ditch that runs through city neighborhoods is all fish need.

Nonetheless, I think Williams is right about the value of these urban streams.  As regular access to the Sound becomes an amenity, perhaps a luxury rather than daily reality, and when most people in the Puget Sound basin have never seen a salmon spawning stream, that kind of personal connection seems vital.

And the prospect of connection makes Williams somewhat optimistic: He concludes with the idea of people developing a sense of place.  “If we can allow our relationship to Puget Sound to flourish,” he concludes,  ”we can create a better future for all who live here.”

Some friends of mine who read and liked Homewaters found it rather baffling that Williams could describe so many dire trends and still come out sounding optimistic.  I guess it is odd.  But I like his optimism — and I figure that unless a lot of us think something better is possible, we can all kiss the Sound goodbye.