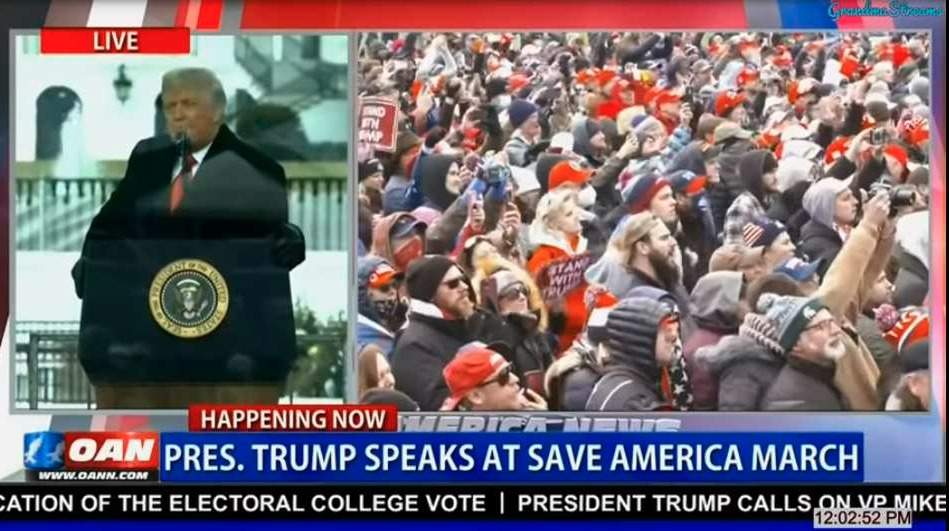 A self-pitying Richard Nixon roamed the White House in his final days as President, talking to oil portraits of his predecessors, weeping and making Henry Kissinger kneel on a rug and pray, sitting morosely in front of a roaring fire – this was July – and playing music from “Victory at Sea.”

At no point, however, did Nixon try to forcibly hang on to power.  Chief of staff Alexander Haig was on the lookout for irrational actions which never came.  Nixon bade good-bye on the South Lawn of the White House, and the 37th President was gone.  He later confessed to David Frost – for a lot of money – that he let the American people down.

Donald Trump makes Nixon look virtuous, even in the volume of his obscene language. The 45th president would seek to steal an election he lost by 7 million votes, trigger an insurrection at the U.S. Capitol, and as recently as Saturday night told a Phoenix rally that “everyone knows” he was robbed of victory.

What has moved Trump? Answers come in three new tell-all books on his last year in office. In “I Alone Can Fix It,” Washington Post writers Carol Leonnig and Philip Rucker use his chaotic mishandling of the COVID-19 pandemic to sum up Donald Trump: “He displayed his ignorance, his rash temper, his pettiness and pique, his malice and cruelty, his utter absence of empathy, his narcissism, his transgressive personality, his disloyalty, his sense of victimhood, his addiction to television, his suspicion and silencing of experts, and his deception and lies. Each trait thwarted the response of the world’s most powerful nation to a lethal threat.”

The effort to stay in power terrified some in the corridors of power. “This is a Reichstag moment: The gospel of the Fuhrer,” warns Gen. Mark Milley, Chairman of the Joint Chiefs of Staff, referring to the 1933 fire at the German parliament that enabled the Nazis to push through the Enabling Act by which the Reichstag gave them emergency powers.

Yet, despite advice from advisers dubbed “the crazies” – such as conspiracy-mongering attorney Sidney Powell and a drunken, farting, hair-dye-oozing Rudy Giuliani – there was no invoking of the Insurrection Act. The Trump assault on our Constitution proved to be as inept and haphazard as his other actions in office.

Michael Wolff puts it best in “Landslide,” the latest in his trilogy of books on Trump’s turn in office: “The nature of the Trump chaos is that, beyond its immediate desires and pronouncements, there was no ability – or structure, or chain of command, or procedures or expertise, or actual person to call – to make anything happen.”

Starting with Nixon, Bob Woodward has spent 45 years writing insider accounts on a succession of presidencies.  While his sources are off-the-record, readers can track those aides and courtiers who talked with Woodward. They come out looking good. The same game is being played in Wolff’s book.  The rational people around Trump are restoring their reputations. Attorney General William Barr wants it made clear he would not enable the Big Lie.

For some straight shooters, however, confession seems to have been a catharsis. The generals who worked for Trump have something other than combat ribbons to get off their chests.  In 2018, Trump flew to Paris for observances of the 100th anniversary of the armistice that ended World War I. The trip was hitherto notable in his refusal to drive through the rain to a cemetery where thousands of young Americans are buried.

On the trip, as related in Michael Binder’s book “Frankly, We Did Win this Election: The Inside Story of How Trump Lost,” the 45th president remarked that “Hitler did a lot of good things.” He extolled the Reich’s economic recovery of the 1930’s. Then chief of staff John Kelly hit back, saying Germany would have been better living poor than with the Holocaust.  He lectured the President: “You cannot ever say anything supportive of Adolf Hitler. You just can’t.”

These three Trump books are very good reads.  Trump even helped by inviting authors Rucker and Leonnig down to Mar a Lago for interviews.  Were it not for the pandemic, he tells the authors, “I think it would be hard if George Washington came back from the dead and he chose Abraham Lincoln as his vice president, I think it would have been very hard for them to beat me.” Still, different styles set the accounts apart.  Wolff is full of racy prose, vague on sourcing.  He is unmatched at underscoring the tackiness of Trump. Describing screaming matches at the White House, he sees Trump as “a kind of Jerry Springer, polling people in the room and egging them on to take pot shots at each other.” Or: “Television was the singular point of the Trump Administration.”

“Frankly” is the first book for Binder, a White House reporter for the Wall Street Journal.  He captures Trump as bully. The President rages that he wants to “beat the fuck” out of demonstrators protesting the George Floyd murder, and “crack their skulls.” Binder is best at watching Trump toss allies under the bus, supine Vice President Mike Pence being “so disloyal” and Senate Republican Leader Mitch McConnell being “dumb as a rock.”

“I Alone Can Fix it” often reads like a newspaper story, with Trump actions described followed by an obligatory denial. It gets chilling, however, with Trump’s periodic desire to send in the troops. The 45h President was incensed at Seattle’s Capitol Hill Occupied Protest zone, and false reports by Tucker Carlson on Fox News about “the descent of our nation into chaos and craziness.”

“Take back your city NOW,” he Tweets to Mayor Jenny Durkan and Gov. Jay Inslee. “If you don’t do it, I will.” When the CHOP zone is cleared, Trump claims it was his doing. “One hundred percent,” he tells Sean Hannity, “We were going in. We were going in very soon. We let [local officials] know that, and all of a sudden they didn’t want that. So they went in before we got there.”

Liar! Still, the book carries a message to this Washington. In fending off Trump’s send-in-the-troops calls, “Barr had assured the President he had a lot of faith in Seattle Police Chief Carmen Best, explaining to him that she was keeping a close watch on the situation, had plans to clear CHOP if necessary, and was keeping the Feds fully briefed.”

At the same time, however, ideological left members of the Seattle City Council were undercutting Best, declining to bring her in the loop on proposed police cuts, and ultimately forcing the police chief’s resignation. Damned fools are found at both ends of the political spectrum.

The January 6 insurrection at the U.S. Capitol brings unforgettable moments. Rep. Adam Smith, D-Wash., chairman of the House Armed Services Committee, calls Gen. Milley to tell him: “We need to clear the Capitol. Bring overwhelming force. The mob has overwhelmed us.”  Yet, Trump dawdles, seems to enjoy what he set off, as daughter Ivanka Trump tries to persuade him to send in national guard troops and call off his troops. We’ve learned, thanks to Rep. Jaime Herrera Beutler, R-Wash., that House Minority Leader Kevin McCarthy begged Trump for help. Trump falsely responded that the Capitol attackers were Antifa. Asked to have his supporters stand down, he tells McCarthy: “Well, Kevin, I think these people are more upset about the election than you are.”

Ultimately, the government designed by the Founding Fathers still worked.  As Gen. Milley puts it in “I Alone Can Fix It,” “There was a peaceful transfer of power.  There weren’t tanks in the streets.  And the line bent, but it didn’t break.”

The line is still bending, as Trump travels the land spreading the Big Lie to big rallies.  Leaders of the Republicans in Congress, particularly McCarthy, have kowtowed to him. Main Street conservative Republicans in the Senate are retiring, an invite to further dysfunction and polarization. The political right is even polarizing the vaccination issue.

I strongly suggest you read “I Alone Can Fix It,” or “Landslide,” or “Frankly, We Did Win this Election,” maybe more than one.   The books bespeak ongoing danger to the country, bringing to mind the famous reply of Benjamin Franklin when asked what our future form of government would be:  “A Republic, if you can keep it.”

Joel Connelly
I worked for Seattle Post-Intelligencer from 1973 until it ceased print publication in 2009, and SeattlePI.com from 2009 to 6/30/2020. During that time, I wrote about 9 presidential races, 11 Canadian and British Columbia elections‎, four doomed WPPSS nuclear plants, six Washington wilderness battles, creation of two national Monuments (Hanford Reach and San Juan Islands), a 104 million acre Alaska Lands Act, plus the Columbia Gorge National Scenic Area.
Previous article
Nicholas Kristof — The Next Governor of Oregon?
Next article
Should Joe Manchin Just Go to Hell?