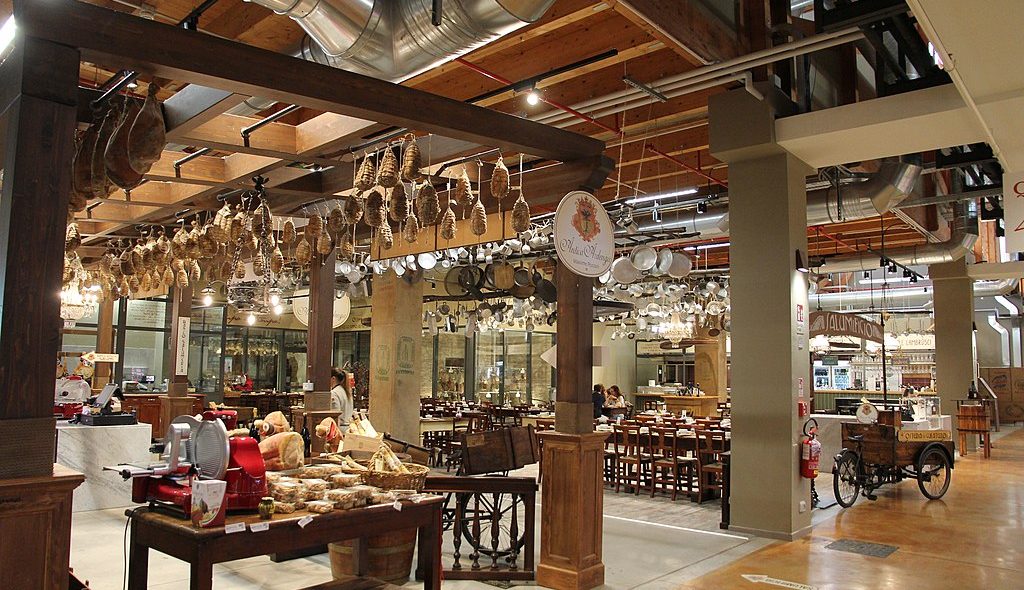 Eataly — When Even Italy is trying to Fake Italy

To quote my wife and to cut to the chase, “Is THIS what we drove five hours to see?” The “this” was the mega-store known as Eataly.

Last year on a trip to Rome, we saw one from a distance – a huge building with a distinctive roofline and a sign so enormous it would be more properly called a billboard. But we were in Rome for another reason and decided not to check it out, despite the many articles in magazines and newspapers that make it seem like a mecca for foodies. Indeed, there are already outlets in 37 major cities around the world, and the American invasion (New York, Chicago, Boston, Vegas, Dallas, Hollywood) is under way, providing merchandise, food, takeout, delivery, classes, and spectacle. Among the various ideas floated for the empty ground floor of Seattle’s downtown Macy’s: an Eataly.

So we drove to Bologna to check out its Eataly. This was a grueling trip involving hot weather, traffic jams and diversions, looking for a place to stop for lunch, and finally finding a parking garage with reasonable rates near the center. And then taking a taxi from the garage to Eataly. AND being caught in a sudden thundershower with no umbrella and wearing sandals. By the time we got to Eataly it was 5pm, and we were not exactly in the mood to take in the place with a leisurely stroll.

I admit that my frame of mind was not good. I had imagined an entire block consumed by a massive store containing multiple levels, an open gallery, throngs of people noshing on delicacies, and a bevy of chatty clerks — a good time being had by all. Instead, after meandering aimlessly and searching, we stumbled into a smallish storefront, with an escalator (up only) climbing three levels. Each level was a mashup of merchandising.

Imagine a book store — for Seattlites, let’s say a half-size version of Elliott Bay Books, with a specialty food market offering stacks of packets, jars, and cans, nothing fresh, grafted into recesses between shelves laden with books. Titles with provocative names like “Discovering the Secrets of Tuscany,” sat a few centimeters from bottles of extra virgin olive oil selling for 15 euros. Tucked into larger alcoves were a handful of restaurants and cafes. At that time of day, they were all empty, save for uniformed staff sweeping the floors for the evening shift.

To people in the Seattle metro area, this should sound familiar. The various Third Place Books combine books and foods to eat on the spot. Delaurenti’s in the Market offers amazing food products of all sorts shipped direct from Italy. The venerable Pike Place Market combines all of this and offers many other choices to boot. Spurred by the pandemic, Seattle restaurants are busy developing their takeout business and selling foodstuffs.

So is Eataly the answer? I think most people in Seattle might be bored with Eataly. We left after 20 minutes. The best part of the trip was just outside Eataly, on the Via degli Orefici. This narrow street is jam-packed with small restaurants, outside tables clustered under big umbrellas, and tiny shops selling all manner of goods, from custom-made shoes to vintage silver serving sets to freshly cut fruit presented in beautiful arrangements. Couples strolled by our table, arm in arm. Kids zipped around on bikes. Elderly women carried bags of fresh vegetables home for dinner. We were within earshot of at least five, animated, simultaneous conversations. The server chatted with us amiably and we heard languages spoken from many nearby countries, along with, of course, Italian.

In other words, The Real Italy.

Sociable. Boisterous. Chaotic. Often perplexing. But always beautiful. Why would we go inside a store to get a watered-down facsimile? Living in Italy, one gets to know merchants and their staff by their first names. (Sometimes even the names of their children and their cousins). Angelo, our butcher, now knows exactly how we like the whole turkey prepped for Thanksgiving. Lia, the owner of one of our food markets, immediately texts me whenever she gets in a particular item I like. The woman who carries books and art supplies keeps in stock special drawing pens for me. We have met the family of the fish monger, often coming across them at a favorite restaurant.

That is the magic of Italy. Relationships built up with time and repeated social contact. Not merely the co-location of Sicilian cooking oils and convoluted crime novels.

So who exactly does Eataly appeal to? Over a dinner of hand-crafted pizza and salads, our young, bilingual Italian friends gave us the answer in unison — tourists. Of course, this includes not just Americans and Brits, but Europeans and even some Italians as well, all eager to experience Italy in one single gesture. The mercantile version of the Big Gulp, perhaps.

I chose to save the biggest jolt for last. On our way to Eataly by car, I noticed that Google maps showed two places marked as Eataly. Two in the same city? The one we checked out was in the historic center; the other was in a nondescript, outlying suburb marked mainly by massive roundabouts and large industrial structures. It was only a few kilometers away, so we decided to check it out. Leaving the autostrada, dotted with signs pointing the way, we rounded a curving road and there it was.

Ten lanes of asphalt roadway leading up to a huge arched toll plaza with booths and gates. This was a gigantic amusement park, under the blazing metal banner of Eataly. Set to open in late July, the place was abuzz with new employees showing up to train for operating the rides and serving food from pit stops in between.

Well, food is, after all, supposed to be fun. But, sorry — bumper cars blended with balsamic is not my idea of entertainment.  In the future, we shall pass.

Mark Hinshaw
Mark Hinshaw is a retired architect and city planner who lived in Seattle for more than 40 years. For 12 years he had a regular column on architecture for The Seattle Times and later was a frequent contributor to Crosscut. He now lives in a small hill town in Italy.
Previous article
When I Swam with Juan Peron at the “Hotel of the Dictators”
Next article
Does Ranked-Choice Voting Boost Women and Minority Candidates?