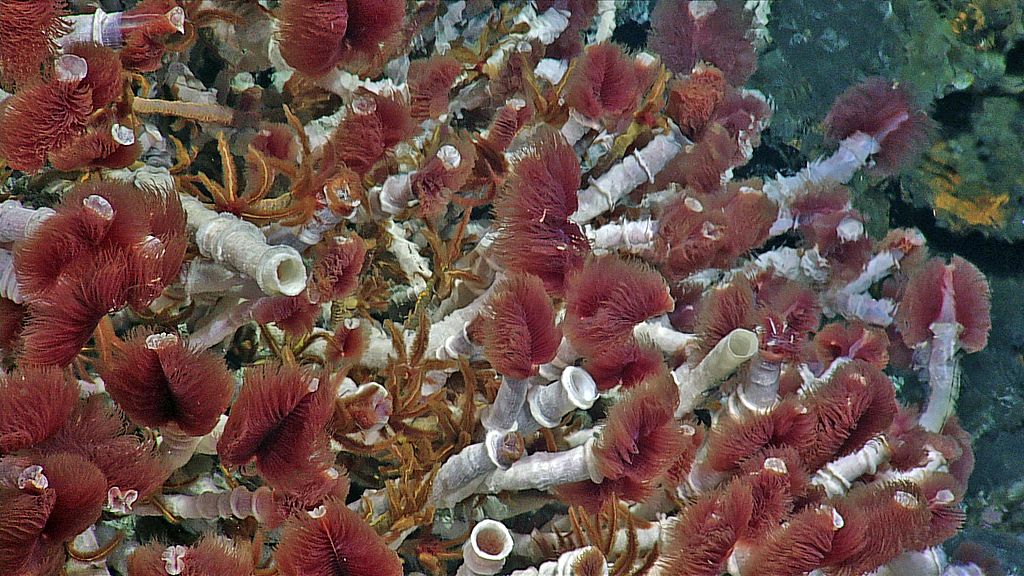 Saving the Seabed… Or Exploiting It?

Ask anyone what is lurking below the waters of the Salish Sea and you might hear about whales, seals, jellyfish, kelp, salmon, or octopi for Marine Science Center fans. Ask a geologist, though, and you will hear about sand, gravel, clay, or glacial deposits.

Environmentalists and many residents of the Northwest who appreciate our environs support laws that protect our sea life and the critical habitat that fosters it. A recently passed bill seeks to protect the underlying seabed and the critters that live on and in the sediment.

Senate Bill 5145 (2021-22), sponsored by State Senator Van de Wege, prohibits seabed mining in Washington’s state-owned aquatic lands. It was just signed into law by Governor Inslee.  Oregon passed a similar law way back in 1991.  A press release on the bill notes that “seabed mining sucks up the ocean floor … creating plumes of sediment that resettle in surrounding areas and can smother deep sea vents.” The legislation is an apparent win for environmentalists. But the story is actually far more complex.

Seabed mining is at the center of many conflicting issues: the growing demand for energy and personal electronics; international cooperation; engineering challenges; and protection of the marine environment.

Our need for metal is as old as the Bronze Age more than 5,000 years ago. As an example, my cell phone is dying: soon it will no longer be supported by the company that made it, and the battery barely survives a few hours in the cold. It turns out my phone contains more than half of the total number of elements as yet discovered in the universe. This was confirmed by a recent blender study where scientists ground up a phone in a blender – à la the ‘bass-o-matic’ – to measure the contents. Turns out my iPhone contains mostly aluminum, iron, and silicon but also a large number of other precious metals including cobalt, silver, gold, tungsten, and a group of metals called ‘rare earth elements’ (REEs).

Ironically, it is partially due to our reduction of dependence on fossil fuel that is driving the need for metals. Batteries for electric vehicles, cell phones and laptops all need lithium, cobalt, nickel, REEs and other metals. One wind turbine contains more than a metric ton of copper.

The seabed is full of metals, in very specific geochemical environments. In shallow water, metals concentrate in placer deposits – marine extensions of those exploited on land. Metals form crusts on volcanic rocks found on seamounts and as nodules lying atop deep sea plains. They are concentrated around hydrothermal vents, or ‘black smokers,’ associated with mid-ocean ridges, a large number of which have been discovered just offshore the northwest coast.

Submarine volcanic crusts rich in metals were first discovered in 1868 north of Siberia in the Kara Sea along the edge of the Arctic Ocean. The R/V Challenger expeditions (1872-1876) discovered a wealth of small black-brown balls in the middle of the deep Pacific Ocean rich in manganese and iron, christened ‘manganese nodules.’  It was not until 1977, however, that the first hydrothermal vents were discovered on the East Pacific Rise along the Galapagos Rift just beyond the Gulf of California.

Imagine the scene. It is 1977 and you are in a small manned submersible (the Alvin) diving along a mid-ocean ridge. Suddenly you come upon something no human has ever seen before: a six-foot tall spire of rock sticking out of the sea floor with a jet of black super-heated fluid spewing out the top, like smoke out of a chimney. No biologists are aboard because no one expects the second shocking discovery: life is thriving in the abyss. Clustered against the rock chimneys are foot long clams and human-sized tube worms with heads like tulips. Think about that next time you add worms to your compost.

Up to that time, the scientific conventional wisdom described a barren and lifeless deep sea below the photic zone where light penetrates because plants require sun for photosynthesis. In these environments, however, bacteria feed off chemicals in a process termed ‘chemosynthesis.’ These bacteria form the basis of the food chain, symbiotically supporting entire communities of plants and animals. Many of the organisms living in vent communities are unique to that environment. On average, two new species have been discovered every month over the last few decades. Some scientists hypothesize that chemosynthesis was the catalyst for life on our planet.

It would be simpler for deep sea mining advocates if the deep sea bed was indeed lifeless. The continued discovery of new, and let’s face it, pretty weird species on our planet proves the adage that life prevails.

The technology for mining in the deep sea is a young but growing engineering field. It is a complicated problem, what with extreme water pressure, increasing by 14 psi every 10 meters. Oceanographers who have worked in the deep sea are reminded of this by their souvenir styrofoam cups:

Although the presence of deep sea metals has been known for decades, the cost of recovering these metals has discouraged exploration and development. Now, as demand and the associated cost for metals increases, it is becoming more economically feasible to look towards the seabed.

Conservationists have called for moratoriums on mining to ensure the marine environment is protected. Others view seabed mining as a moral imperative given metals’ crucial role in renewable energy.

The potential for environmental degradation discussed in Senate Bill 5145 is merited, but the impacts are not well understood since much of the technology to recover minerals is still in development. A German research program begun in 1989 (DISCOL) is still one of the few field-scale experiments that have taken place. The study basically utilized a large underwater plow to rake the sea floor, and then monitored the effects. The simulated mining created a plume of disturbed sediment that rained down and buried most of the study area, smothering creatures on the sea floor.

Complications stack up. China controls much of the existing supply of REEs and other metals. President Biden has issued an executive order to identify risks in the supply chain that might hamper goals toward moving away from fossil fuels.

Several of the minerals required for our phones are termed ‘conflict minerals’ similar to conflict or blood diamonds. The Apple company is committed to sourcing conflict-free minerals; the iPhone 12 is the first Apple product made with recycled tungsten and the first with majority recycled REEs.

Other than re-use and recycling, land-based mining remains the only other alternative to finding new supplies of metals. However, there are documented cases of human rights abuses associated with land mining. Mining on land is still fraught with environmental issues that have not been resolved, including deforestation, loss of biodiversity, overuse of water, acid mining drainage, and contamination of soil and water.

So amongst all of these complexities, how do we as citizens of planet Earth decide if and/or where mining of the seabed should occur?  Can it be done environmentally responsibly? Who regulates this and how? And why has the United States still not signed the Law of the Sea Convention?

Peggy Myre
Peggy Myre is founder and president of Exa Data & Mapping, a local company providing marine environmental data management and visualization services to national and international clients.
Previous article
How Mainstream LGBTQ Groups Became a Political Force in Seattle
Next article
Yay! Signs a Seattle Homelessness Program is Working (But Can we Believe the Report?)