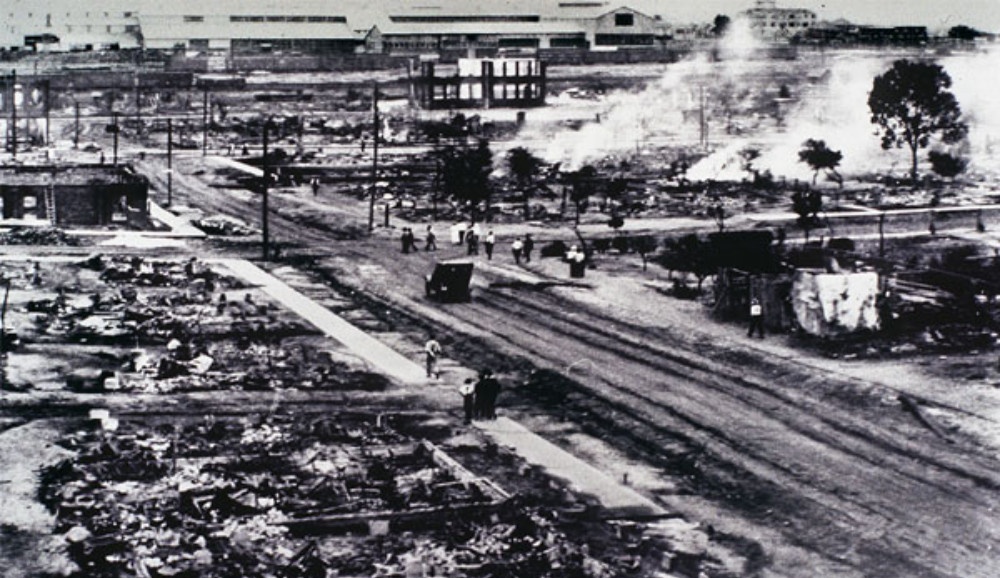 The belated national recollection of the 1921 Tulsa race massacre reminds Americans of what followed: the great forgetting.  This amnesia was helped along by creative writers, artists, and filmmakers, engineered in New York and Hollywood.  Examples are Edna Ferber’s best-selling 1929 novel and the RKO’s film, Cimmaron, issued a year later, along with the 1943 smash-hit musical Oklahoma!, and the 1949 film, Tulsa.

Ferber, a Pulitzer Prize-winning author of popular family sagas, wrote Cimmaron eight years after the Tulsa massacre.  All her novels involved prodigious research, but she set her fictional account of Yancy and Sabra Cravat’s tumultuous marriage in Oklahoma’s Cherokee Outlet shortly after the land rush of 1893.  If not as violent as “Bleeding Kansas” prior to the Civil War, the history of the southern central plains after the Civil War was bloody and no less chaotic.

Stretching to the Rocky Mountains, Indian Territory was organized on the central plains in 1824, intended to be a catchment for tens of thousands of native people like the Cherokee driven by the United States from their homelands east of the Mississippi.  Subsequent Congressional action reduced Indian Territory in size until only the eastern half of Oklahoma remained in native hands after it became a state in 1907.  Historian Angie Debo writes that the process of dispossession was marked by “corruption, moral depravity, and criminal activity.”  Beginning in the 1880s, “surplus” native land in Oklahoma was seized by the government, surveyed into 160-acre tracts, and sold primarily to whites.  The Cherokee Outlet, a wide northern strip of the future state, was opened to settlement on September 16, 1893.  At the sound of a pistol shot 100,000 would-be claimants (Sooners) raced onto 6 million acres emptied of its native inhabitants to claim 40,000 homesteads.

With a satiric eye, Ferber peopled her novel with contending characters.  Hero and heroine Yancy and Sabra are both of mixed backgrounds, and they prosper in the new land.  The dispossessed include a persecuted Jewish merchant, Sol Levy, a young southerner, Dixie Lee, forced into prostitution, and Indians and outlaws who refuse assimilation.  Ferber’s brief but pointed allusion to the Tulsa massacre comes when a young black servant, Isaiah, whose job it is to fan guests at a dinner party from a plank suspended directly over the dining table, falls splat, “directly into the midst of Frances Venable’s virgin, frosted silver cake.”

The film of Cimmaron, released in 1931, won an Academy Award for best film, one of few westerns to do so. The costs of filming the land rush meant the popular film did not recover its investment, and its grating stereotypes of native people make it very dated today.

The musical Oklahoma! grew out of a 1930 folk play, Green Grow The Lilacs, which enjoyed only a brief run on Broadway.  Written by Oklahoman Lynn Riggs, his play was set in rural Oklahoma at the turn of the century.  Part Cherokee, Riggs depicted the conflict between rural life in Indian Country and the violent onrush of American history. Riggs chose  a family setting where young cowboy Curley McClain seeks the love of Laurey Williams, an orphan who lives with her Aunt Eller.  She initially scorns Curley for Jeeter Fry, a menacing farm hand.  But frightened by Jeeter’s violence, Laurey turns to Curley, and the two soon marry.

At a shivaree, a folk tradition where villagers assail newlyweds with tossed objects and raillery, the action turns violent when Curley fights Jeeter and kills him.  He turns himself into the police, and the play ends abruptly as Aunt Eller convinces authorities to allow the couple to enjoy their wedding night.

The one-act play of six scenes, delivered in western vernacular with songs and dancing, was nominated for a Pulitzer Prize. It famously caught the attention of Oscar Hammerstein, who, with composer Richard Rodgers, turned it into Oklahoma! a ground-breaking musical sensation, their first collaboration and one of the longest running plays on Broadway.  Most of Riggs’ characters reappear in the musical, with Jeeter becoming the dark misfit Judd Fry. Riggs’ violent cultural collision is replaced by the less threatening clash between cowboys and farmers.  In the musical’s all-white cast, an echo of Riggs’ ethnic tensions is provided by an outcast Syrian peddler, Ali Hakim (played by Lee Strassburg), who provides Ado Annie, a comic character in both productions, with face cream to cover her freckles.

The musical became a nativist celebration of white culture in Oklahoma on the eve of statehood. It was staged during World War II in 1943, amid the prolonged battle with the Japanese for Guadalcanal and the brutal, island-hopping campaigns in the central Pacific.  Cowboy Curley again wins Laurey, kills Judd Fry, but choses the agrarian life with a new wife in a brand-new state after winning a not guilty verdict in his trial for Judd’s murder.

The 1949 film Tulsa is set in the very city where a white rampage 100 years ago this month destroyed by fire the black neighborhood of Greenwood. The filmmaker Walter Wagner turned it into an optimistic vehicle for promoting conservation against industrial pollution.  It touches on interracial marriage in the romantic relationship of quarter-Cherokee Cherokee Lansing, played by Susan Hayward, and Jim Redbird, a full-blood Cherokee played by Mexican actor Pedro Armendaris.  Walter alleviated possible sexual and interracial anxieties in his audience by having Jim lose out to rugged, white oilman Brad Brady, played by Robert Preston.

There is a remarkable scene where Jim, a cattlemen and vocal opponent of oilmen, faces the threat in a court hearing of being labeled an incompetent Indian. That legal proceeding was all too common at the time, not only in Oklahoma but Seattle, where native people were swindled out of property by easily swayed judges.  But the primary victims in the film are the cows that die drinking polluted water downstream from a cluster of new oil derricks.  The film won an academy award and featured a memorable final scene where Jim lights the oil-polluted creek afire. The flames reach the nearby oil field, turning derricks into flaming torches, storage tanks explode, and workers set off cases of dynamite to create a firebreak.  As an 8-year old watching a re-run on black and white TV, I recall how the scene inspired me to pyromania and a pre-pubescent fascination with derricks.

But the hero of the film is Tulsa, oil capital of the world, presented as a vital, hardworking, and progressive city. Tulsa’s dark secret lay still hidden, thanks to popular novels, plays, and the movie industry.  With the recent centennial of the Tulsa race massacre, research has finally pieced together the dark horror of the city. Tulsa’s secret has become one more crime needing recognition and restitution in our harrowing national confession.

No American city lacks its awful secrets.  What is different now is that the birds have come home to roost in the households of these happy American dreams. At last, they demand an accounting.