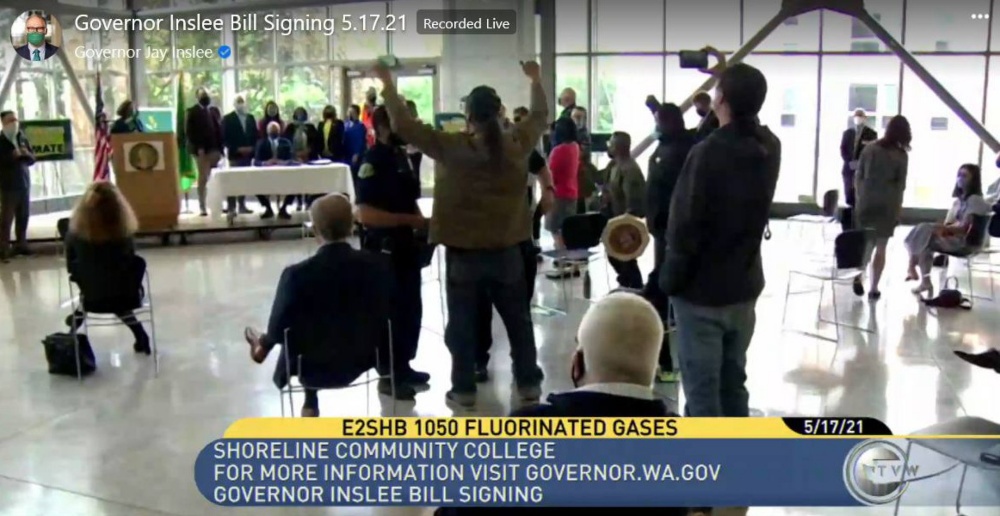 Gov. Jay Inslee got a stinging verbal lashing from Native American tribal leaders recently over his veto of part of the landmark cap-and-trade bill aimed at reducing carbon emissions in Washington State.

In a release sent out as a Friday afternoon special, Fawn Sharp, vice-president of the Quinault Indian Nation and president of the National Congress of American Indians, dropped some truly industrial-grade shade accusing Inslee of betraying his word when he stripped the bill of new powers for the state’s tribes, including this top-shelf zinger: “The only thing I will ever agree with Donald Trump about is that Jay Inslee is a snake.”

Now we enjoy weapons-grade rhetoric about really wonky topics way more than most folks, but we were interested in what really happened here. Why would the governor antagonize powerful and sympathetic allies? Why would the tribes launch such a fierce scorched-earth campaign in response?

So let’s dig in. First, some background:

Under the 19th-century treaties by which Washington’s tribes were systematically robbed of nearly all their land, they were guaranteed the right to fish, hunt, and gather on land outside their reservations. Here’s the Treaty of Point Elliott, signed in 1855 to create the Suquamish, Tulalip, Swinomish, and Lummi reservations.

The right of taking fish at usual and accustomed grounds and stations is further secured to said Indians in common with all citizens of the Territory, and of erecting temporary houses for the purpose of curing, together with the privilege of hunting and gathering roots and berries on open and unclaimed lands.

Fishing rights get most of the ink, but a key phrase here is “…of hunting and gathering roots and berries on open and unclaimed lands.” Back in 1855, there was a great deal of unclaimed land, so the territory the treaty refers to is basically everywhere, even though most of the game has long since been shot or deprived of habitat, and the roots and berries plowed under for farming or paved over by subdivisions, office buildings, and giant airplane factories.

Back to the bill, Senate Bill 5126, grandly styled the Climate Commitment Act, which extracts a giant pile of money from the state’s major polluters and lays out ways that the cash can be spent. As the measure passed the Senate, it contained Section 6, the part Inslee vetoed, which requires “meaningful consultation” with tribes for projects that might impact “the tribe’s resources or other rights and interests in their tribal lands and lands within which a tribe or tribes possess rights reserved by treaty.”

So, for example, if you’re to build a solar farm on land where a tribe has been gathering food for millennia, you have to go consult with the tribe. Seems straightforward, right? Not so fast. The important phrase here is actually “meaningful consultation,” which is not the same thing as “approval.”

There are already a lot of laws and rules requiring consultation with tribes, but most of them don’t have many teeth if the builder of the project persuades the relevant government officials to proceed over tribal objection. For illustration, please see the enormous liquified natural gas terminal at the Port of Tacoma, built in the Puyallup Tribe’s usual and accustomed grounds over strenuous objection.

The tribal consultation provision of Senate Bill 5126 was kind of like that, providing for stoppage of projects if the consultation hadn’t happened at all, but not giving tribes much power to actually block projects. At this point in the process, Inslee was on board. But when the bill got to the House, tribal lobbyists got lawmakers to install some teeth. A new subsection required that projects “must be paused or ceased” if a tribe finds it would “adversely impact cultural resources, archaeological sites, or sacred sites.” It was part of a series of changes in the bill designed to win over environmental justice advocates.

That power to nix projects spooked Inslee and his advisors enough to eventually veto the entire section. “In particular, there are legal concerns with the undefined and broad requirement for tribal consent in the use of climate investment funds and for the lack of due process when consent is withheld,” Inslee wrote in a letter to tribal chairs sent the same day as the veto.

His move infuriated tribal leaders for at least two reasons: First, they argue that Inslee had agreed to the language as a condition of the tribes’ support for the bill and then jettisoned their priority while keeping the rest of the bill. That caught our interest because it reminded us of the “When is a deal really a deal?” problem we wrote about last week regarding his veto of the gas tax provision in the low-carbon fuel standard.

That veto also blew up a carefully negotiated deal, but Inslee argued that he wasn’t a party to that agreement. When we reached out to his office on this veto, we got a similar answer. “There was never, under any circumstances, any deal on keeping that language in the bill,” Mike Faulk, the governor’s press secretary, told me in an email. “The governor did not agree to it, and in fact there was no government-to-government outreach by tribes to the governor to discuss the language, which was known to be highly controversial and potentially raise a variety of legal issues.”

However, both tribal lobbyists and the relevant members of Inslee’s staff would have been part of the complex web of Zoom calls, email strings, and group texts that were used to negotiate the bill in the COVID-restricted session. On April 23, two days before the end of the session, Inslee himself, along with legislative director Drew Shirk and climate policy advisor Becky Kelley, met with House Environment and Energy Chair Joe Fitzgibbon, who was navigating the bill to House passage, according to Inslee’s calendar for that day.

Several sources involved in the negotiations tell me that no objections were raised on the tribal approval language until shortly before the veto, leaving tribal leaders feeling back-stabbed. That makes this veto substantively different in an alienating-your-allies sense than axing the gas tax in the low-carbon fuel standard bill, which Inslee was known to oppose. In that case, he was whacking a centrist faction of Democratic Senators led by Mark Mullet. Inslee actually opposed Mullet’s reelection last year.

The tribes, meanwhile, were big supporters of Inslee’s reelection and among the larger donors to the Washington State Democratic Party and Democratic lawmakers, spending more than $1.3 million in the 2020 election cycle.

Tribal interests were also irked because they argue Inslee’s concerns are vastly overblown. Here’s Matthew Randazzo, a lobbyist for the Snoqualmie Tribe and one of the crafters of the language: “That language simply says that you cannot use the specific carbon fund created in the bill that tribes passed to fund a project over a tribe’s objection that it desecrates a cultural resource like a sacred site or burial ground. Tribal leaders, including at least one attorney, have personally explained this to the governor, and they persist in spreading this misinformation to create an excuse for their actions.”

The sticking point may be the phrase “cultural resource,” which generally refers to things like graveyards and archeological sites rather than the broader area where a tribe has rights to hunt, fish, and gather. While it could arguably be applied to a food resource, Randazzo said, he doubts any court would give a tribe such latitude.

In his letter to tribal chairs explaining the veto, Inslee proposed a summit this summer to begin developing an improved consultation process. He also took pains to point out the very tangible benefits for tribes elsewhere in the bill. The measure requires that about or 10 percent of the money generated by the cap-and-trade system, roughly $840 million by 2040, go to programs and projects supported by tribes. It also promises $25 million per year to help tribes deal with impacts of climate, money that would go to things like moving communities threatened by sea-level rise and flooding.