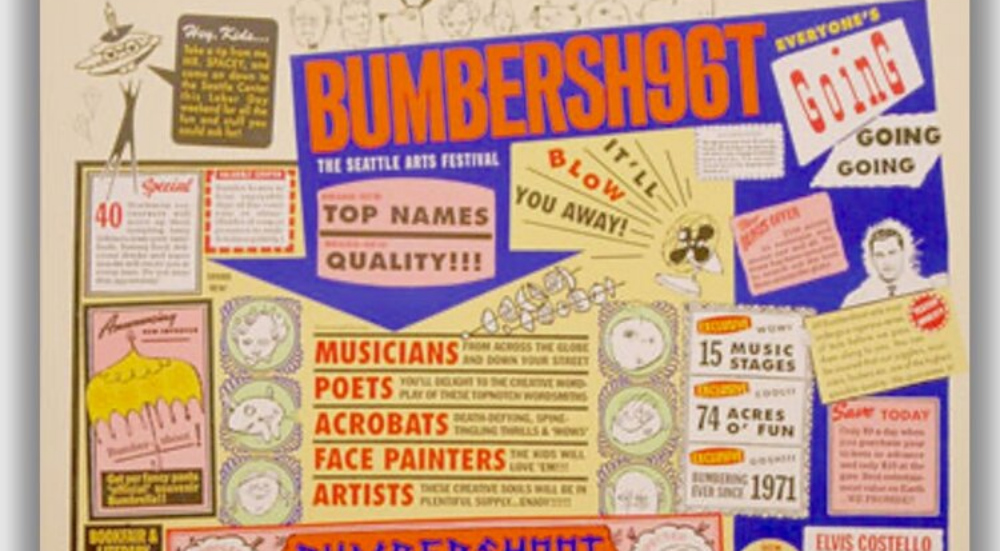 Bumbershoot: Down for the Count?

In late 2019, when producer AEG, the country’s biggest music promoter, stepped away after five years of producing Seattle’s iconic Bumbershoot Festival, it was an admission that the event had become unsustainable. Founded in 1971, Bumbershoot had drawn as many as 325,000 fans to the Seattle Center grounds for the annual Labor Day weekend event. By 2019, tickets for the once-free celebration had grown to $220 and audiences had shrunk to 30,000. (My Post Alley colleague Jean Godden recently wrote about the City Council’s decision to save Bumbershoot and hire AEG after 2014’s $900,000 loss, a decision she says she’s grown to regret.)

Scrambling to regroup after AEG withdrew, in February 2020 the City announced it had enlisted One Reel, the once legendary Seattle producer and longtime steward of Bumbershoot in its heyday, to once again produce it. Of course, the 2020 festival was almost immediately canceled after COVID hit, but there were assurances that it would return in 2021 for Bumbershoot’s 50th anniversary.

A few weeks ago came the announcement that 2021 wouldn’t be possible either – unfortunate but probably understandable given uncertainties over safe resumption of live events. But look a little deeper into the announcement and there’s alarming evidence that City leadership doesn’t have a clue about how to revive Bumbershoot. Beyond the rote de rigeur blah blah about “maintaining the Festival’s essential character of artistic and cultural diversity and excellence and the tradition of strong community festival involvement,” there was nothing to suggest the past year has produced a well-thought-out plan for the event.

In fact, in the cancellation announcement, the City announced the formation of a new “exploratory committee” to “inform and advise the Seattle Center Director about Bumbershoot’s future.” A year-and-a-half after AEG withdrew. A mere six months before what was supposed to be the 50th anniversary festival.

There were concerns when the City asked One Reel to take over Bumbershoot last year whether it still had the chops to do so. The company, once one of the most creative and inventive forces in the region, had shrunk from more than 50 employees to a handful. A glance at One Reel’s website shows its current activities consist mainly of managing a Pianos in the Parks program, the occasional special event and a small Art Saves Me initiative. Hardly big-time producer cred.

Nonetheless, One Reel is Seattle cultural royalty and probably deserved a chance to pull it off. Booking and producing talent can be hired in the service of really good ideas. But a year-plus into the project the fact we’re just now getting around to forming an “exploratory committee” and that there’s not some serious plan well underway is a very bad sign.

The modern festival is not something that comes together in a few months, or even a year if it’s starting from scratch. The music festival model AEG had been using — big name acts, big price tickets — has been broken for a while now, so a renewed Bumbershoot – no matter its glorious history – has to be reinvented. That means essentially creating a completely new model in a competitive and challenging environment. That’s a big hill.

So what happened to the old music festival model?  It used to be that big-time musicians toured to support sales of their albums, which is how they made most of their money. Live concert fees, though never really cheap, were negotiable because the musicians would make it up on the recording sales on the back end. But with the internet and streaming, musicians now make little money in recordings. So, as I wrote over a year ago in Post Alley:

“Over the past 20 years there has been an explosion in the number of festivals around the world. Thousands of them sprang up, some becoming giant franchises. Miami’s Ultra dance music festival bred editions on three continents. Coachella, Bonaroo, Glastonbury, Outlands, SXSW, Governors Ball, Lollapalooza, Pitchfork, Burning Man and others have become aspirational destination events that sell out within minutes and cost hundreds of dollars to attend. California’s Coachella, one of the biggest, earned $114.6 million over two weekends in 2017. Sydney, Australia’s annual festival takes over the city and attracts 1.4 million participants. Billboard reported two years ago that 32 million people attended festivals in the US that year.”

The big festivals became an international circuit and a lucrative source of income for musicians. Fees skyrocketed. Theoretically, AEG was in the best position to make Bumbershoot work, given its scale and clout to book top acts. But the economics – as with many midsize festivals trapped in the cost spiral – still didn’t work. And artistically, the model has been in decline, anyway, as once-unique festivals became increasingly generic.

So it’s no surprise the City is making noises about trying to revive the local quirkiness that initially made Bumbershoot such a success. Probably the biggest buzzwords in the arts right now are about the need for local authenticity to reflect, include, and engage community. Had new Bumbershoot producers been working on what that model would look like and involving the community in planning this past year (even during COVID), then there would be cause for optimism.

The fact that a whole year has gone by, during which the public has heard and seen nothing, and a committee to “advise” on the future of Bumbershoot is only now being formed — is an indication that there’s no creative spark at the center of this reinvention. This reads more like a performative Seattle collaborative exercise rather than civic and cultural leadership. The reality: You can’t produce creative vision by committee.

The irony is – given the lockdown of the past year and the halt to our shared civic life – a creative festival is perfectly positioned to capture the attention of the city and primed for success. A surprising number of the world’s biggest and most successful (and long-running) festivals were born out of crises. The Edinburgh Festival, one of the largest and most creative, for example, was started in response to World War II and the desire to assert the resilience and creativity of the Scottish people.

Seattle, a wealthy city built on the creativity of its workforce, would come together around a collective expression of that creativity, as it did in the Alaska-Yukon-Pacific exposition in 1909, which drew 3.2 million, and the 1962 Seattle World’s Fair, which kickstarted many of Seattle’s cultural institutions. Bumbershoot itself was born in reaction to the Boeing Bust which had devastated the region. Then-Mayor Wes Uhlman initiated that first festival as a way to try to rekindle civic spirits. It worked.

In that earlier Post Alley article, I listed a series of suggestions about how to rebuild Bumbershoot. Here are three more, given that we’re a year later and the door is closing quickly on 2022:

Douglas McLennanhttps://www.artsjournal.com
Doug is a longtime arts journalist, and the founder and editor of ArtsJournal.com, he's frequent keynoter on arts and digital issues, and works with a number of arts organizations nationally.
Previous article
An epic Charter Divide: Public Battle over Seattle Homelessness Proposal
Next article
Elizabeth Warren’s New Book: Her Persistent Assault on Corruption