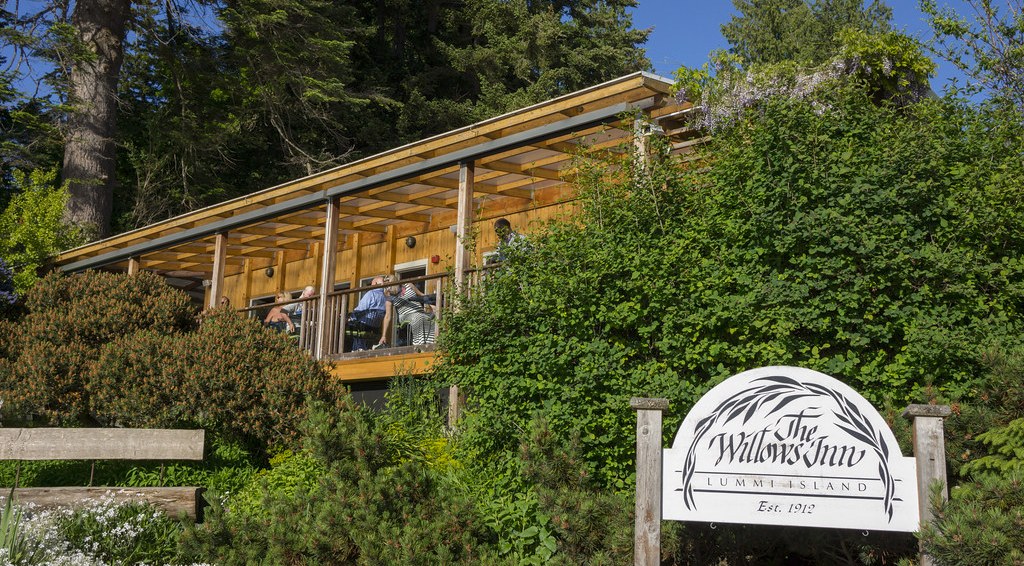 Trouble in Paradise: Lummi Islanders React to a National Expose of its Famous Restaurant

Some years ago, I made the mistake of writing a travel article about the unspoiled charms of Lummi Island and, to my surprise, I received hate mail and veiled threats. A half dozen residents complained that my story would attract hordes and upset the island’s pastoral lifestyle.

Since then, I have acquired my own modest hide-away on the island, inherited from a dear friend, and I have learned to keep quiet about life in the close-knit community. It’s still the kind of place where the clerk at the Islander general store fills you in on the annual library book sale, a pancake breakfast at the Grange, or the passing away of a beloved island dog.

Knowing the island’s publicity shyness, I was shocked when Lummi Island, allegedly home to only 816 permanent residents, made the front page of the New York Times food section. Shown in full color was a picture of Blaine Wetzel, chef-owner of Willows Inn, and the unspoiled Lummi shoreline, topped with the headline: “Idyllic Island, Toxic Workplace.” The Times’s expose later was picked up in the Seattle Times and by Eater, a restaurant website.

The news story related how diners from around the world have been flocking to the Willows Inn, a century-old bed and breakfast acquired in 2010 by Wetzel, a young chef fresh from Copenhagen’s acclaimed Noma restaurant. Since Wetzel took over the kitchen, it has become a sought-after destination, fully booked each night of its annual season from April to December.

Gourmet visitors come for the praised multi course prix-fixe dinners with such seasonal items as Dungeness crab tetela, smoked steelhead, clam garlic bread and watercress broth as well as salmon pulled from waters off Rosario Strait that diners see from the dining room. Many of the culinary pilgrims also stay in lush rustic bedrooms and breakfast on wild blackberries and fermented sourdough bread. Price for dinner alone runs $195.

The Times story, however, told of alleged reality at the island paradise, noting complaints of exploitive work-place practices and shameful behavior, including sexual harassment of female employees by male staff, misrepresentation of some ingredients as locally sourced, racism, misogyny, and verbal abuse. To compound its list of troubles, the Willows agreed in March to pay $600,000 to settle a class-action lawsuit after a 2017 federal investigation confirmed accounts of wage theft and other unfair labor practices.

Reports carried in the New York Times, some anonymously, told of former workers, young women from the island who said they were touched inappropriately, given drugs and alcohol and pressured into having sex by men on the kitchen staff and visiting chefs. Other former employees were quoted as saying the atmosphere was chaotic and even “nightmarish.”

Asked by the Times about these distressing reports, Wetzel responded in a quote carried in the story: “We are deeply saddened to learn that some former employees shared concerns about our business. Our goal is for anyone who works at the Willows to think about us as the most kind, caring, generous and talented people they have ever worked with and the Willows was the best job they have ever had. If we are missing the mark we must improve.” In other words, a non-apology apology.

The Times‘ multi-page story served to focus world attention on problematic operations at the historic Inn and, understandably, it has stirred reactions from Lummi Island’s residents. During my recent visits, I found the islanders very aware of the Times’ bombshell but voicing mixed reactions.

One long-time resident, Wynne Lee, told me that attitudes tend to be generational with younger residents not at all surprised by inflammatory accounts. They say, “We told you so.” Older residents are apt to find reports, while painful and sad, not as damning, more along the lines of typical chef “crazy behavior.”

Lee explained that, because it’s such a high-end restaurant, island residents seldom eat at the Willows, opting for the far less pricey Beach Store Cafe. Another vintage operation, the cafe has been limited to take-out during the pandemic, although there are plans to reopen outdoor dining at the beer garden soon. Lee concludes, “Chefs at the Willows may be world famous but we have a lot of good cooks on the island. I can’t wait ’til we can go back to the island’s Potluck Dinners.”

When asked about the Times’ story, Paul Davis, veteran editor of “The Tome,” the Island newsletter, confessed he’d not eaten at the Willows since Wetzel took over, explaining, “I’m pretty much a meat and potatoes man.” Writing on the Lummi Island blog, Davis withheld judgment saying, “I just want to comment that, while not looking to Lummi Island for the majority of their clientele, they are interested in the nest in which they live. Willows Inn manager Reid Johnson just made a generous donation to the community association’s community projects including Meals on Wheels.”

Less forgiving was Penny Hougland who spoke out on Nextdoor. She called the alleged deception and treatment of employees “painful and sad” and was deeply touched “by the eloquence, strength, and resilience of former employees who contributed to the article.” While acknowledging the Willows’ donations to the community, she called for a more direct public apology and improved workplace treatment.

Her view was echoed by others in the community. One said, “May they fall hard and fast.” Another deplored the “exploitation of the people and the land for the benefit of those who have wealth and privilege.”

Commenters lamented the loss of former operations at the Willows; they spoke of missing the once-popular lower-level coffee shop. But several pointed out the value of having such a famed establishment and award-winning chef on the Island. Counted as positive are the short-term benefits of attracting tourists and potential patrons for the many resident artists and studio open houses. Another plus has been increased travel on the 20-car Whatcom Chief, perhaps keeping ferry fares from increasing.

Artist Debby Pawlek recalled that the Willows gave away food at the beginning of the pandemic. Lummi resident Patrick Vincent said, “We need to think about Riley Starks, Reef Netters, and the Loganita Farm [local suppliers]. We need to think about employment for young people lest we cut off our noses to spite our face. In my view, Blaine Wetzel is basically a decent guy who made mistakes and, by god, the New York Times in a personal hatchet job is making him pay dearly.”

Mingled in the pro/con debate were cheers for what the Island does offer. Nina Laden quipped, “Let the fish and chips fall where they may. I like mine at the Beach Store Cafe.”

Islanders are willing to volunteer opinions about the Willows’ story. Even more important for locals is their interest in sharing the island’s spring sightings. Among them: tiny green tree frogs snuggling in the sunshine, the seldom-witnessed courting ritual of pileated woodpeckers, a hatch of Great Horned Owls, spider season on the beach (“must be a bazillion”), skunk cabbage in bloom. Best of all: the hoped-for return this month of the Saturday Market.

Jean Godden
Jean Godden wrote columns first for the Seattle Post-Intelligencer and late for the Seattle Times. In 2002, she quit to run for City Council where she served for 12 years. Since then she published a book of city stories titled “Citizen Jean.” She is now co-host of The Bridge aired on community station KMGP at 101.1 FM. You can email tips and comments to Jean at jgodden@blarg.net.
Previous article
Four Northwest Novelists: What They Teach Us About Life and Families
Next article
Sawant Circles Back: Her Disingenuous Run at Rent Control