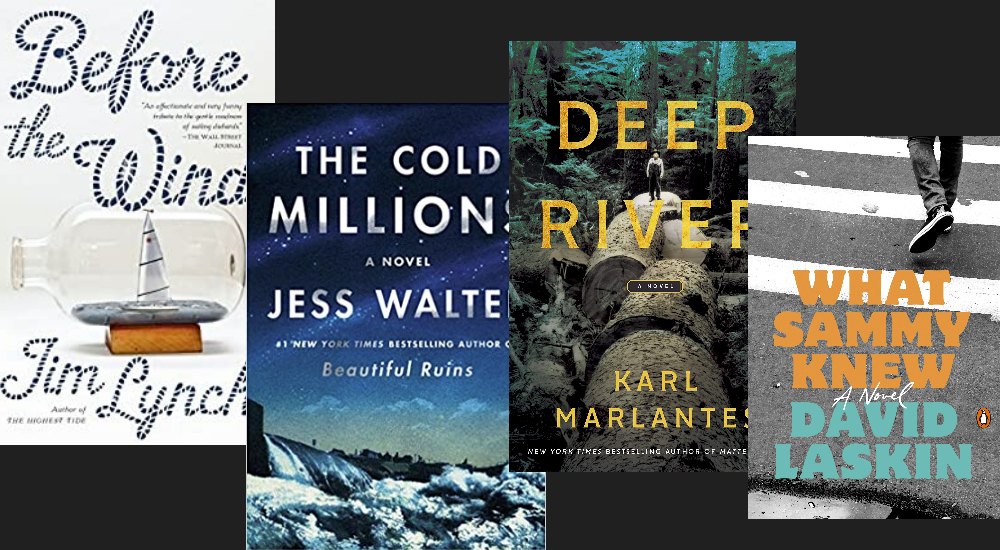 Four Northwest Novelists: What They Teach Us About Life and Families

I’ve been reading novels by writers who live here in the Northwest, so here are quick notes about four. I recommend each one enthusiastically. Each tells a story that affected me, that touched my heart and made it larger and more open.

The Cold Millions by Jess Walter is set in Spokane, Washington, Walter’s hometown. And while the book is set in Spokane a bit over a century ago, Walter’s skills are such that he made me want to re-visit Washington’s “second-city” and get to know it better. He brings Spokane’s rough and tumble history into vivid relief as he follows the fate of two Irish immigrant brothers, Rye and Gig Dolan. The Dolans bounce west arriving in Spokane as the I.W.W. (the Wobblies) are making a valiant effort to unionize area workers. Bonded by love and blood, the brothers are put on different paths by their involvement with the union. A young Elizabeth Gurley Flynn, a real life labor organizer, is the daunting and fearless activist who, in different ways, captivates both Dolans.

Deep River by Karl Malantes, follows well on The Cold Millions as it is set at the same time, the early twentieth century. And here, too, the International Workers of the World and labor movement are central to the story. Marlantes takes us to the other side of Washington State, to its southwest corner. There, in the wet coastal range, giant trees grow. The immigrants in Deep River are Finns, and the first part of the novel is set in Finland. This too is a family story. Deep River takes us into the primeval forest, the dangerous early logging camps, and the nearly as dangerous organizing efforts of the Wobblies. Here the central character is also a woman, Aino. As Walter re-enchants Spokane (no small feat!), Marlantes enchants the woods and the lives of those trying to establish themselves in a new land.

What Sammy Knew is author David Laskin’s first venture in fiction, after many notable works of non-fiction. He takes to the new genre like the proverbial duck to water with crisp, crackling writing. Unlike the others noted here, Laskin’s book is not set in the Northwest, but in the New York and Long Island of his own youth, where a young Sammy Stein is coming of age in the radical world of the late 60s. Here the young, feminist firebrand is Sammy’s first love, Kim. But the real anchor of the story is another woman, Tutu, a black woman who works as a maid in the Stein home. Tutu wrote the book on “tough love.” Laskin’s fictional tribute to a real-life woman shows just how powerful the “powerless” sometimes are. Sammy’s passage from childhood to adulthood is sealed in a dramatic courtroom scene as Sammy risks his future by speaking the truth.

Finally, Before the Wind by Olympia based writer Jim Lynch. Much of this one is set right where I live, in Seattle’s Ballard neighborhood. This too is a family story told through the eyes of the middle-child, Josh Johannssen. The Johannssen family are boat-builders and sailors for whom sailing is their religion. Their love for sailing and one another stresses and shatters the family, but also brings it together once more. Again, the central character and heroine is a woman, Josh’s sister, Ruby, a sort of worldly mystic. But Ruby is only one of a cast of characters that are eccentric, charming, and heart-rending. Like the other works highlighted here, we see family members who love each other so much that they drive each other crazy. Sounds about right.

Such fiction invites us into another world where if the book works — as each of these does — we lose ourselves, but in doing so we also find ourselves again and anew. I need a bit of gender balance in my writers, but the next on my stack is A Tale for the Time Being by Ruth Ozeki.

Anthony B. Robinsonhttps://www.anthonybrobinson.com/
Tony is a writer, teacher, speaker and ordained minister (United Church of Christ). He served as Senior Minister of Seattle’s Plymouth Congregational Church for fourteen years. His newest book is Useful Wisdom: Letters to Young (and not so young) Ministers. He divides his time between Seattle and a cabin in Wallowa County of northeastern Oregon. If you’d like to know more or receive his regular blogs in your email, go to his site listed above to sign-up.
Previous article
Dreaming of International Travel this Summer? There’s a Catch
Next article
Trouble in Paradise: Lummi Islanders React to a National Expose of its Famous Restaurant