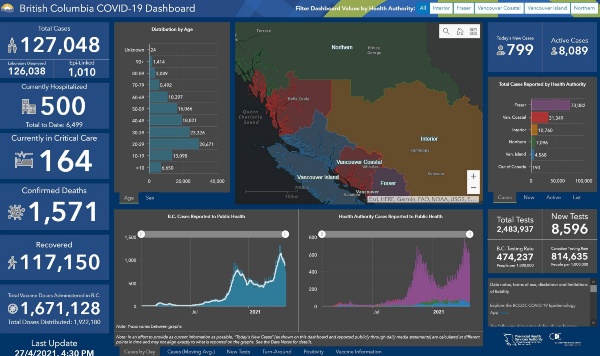 The B.C. provincial government has greeted spring with a stern order to those who would recreate in “Beautiful British Columbia”:  Stay home. With a spike in the COVID-19 pandemic – lately peaking at 800 to 1,000 new cases a day – the province has trotted out lock-down for a province once labeled Canada’s “lotus land.”

It has essentially divided B.C. into three regions: Vancouver Island, Greater Vancouver and the Fraser Valley, and Interior and northern British Columbia. Drive to the town of Hope at the end of the Fraser Valley – the first Rambo movie was filmed nearby – and you cross the line. Essential travel only if you plan to cross that line. British Columbia Ferries on Vancouver Island-Mainland routes, are asking people why they’re traveling.  The rules: No vacationers, no weekend getaways, no visits to family and friends for purely social reasons. No indoor dining at restaurants.

Signs are being erected at such places as Kicking Horse Pass, on the Trans-Canada Highway at the B.C.-Alberta border.  Do not enter unless your visit is “essential travel.”  B.C. Parks are canceling RV and camper bookings.  Police will conduct periodic checks on highways leading across boundaries of the three health zones.  Malefactors face fines of up to $575 (Canadian).

The ban on non-essential travel will last until May 25, at the end of a three-day holiday weekend. The order has been issued under what the province describes as the “extraordinary powers” of the Emergency Program Act. “The new (COVID-19) variant strains are infecting more people and resulting in record levels of hospitalizations that place a growing strain on the front line health workers who have been here throughout the pandemic,” said Mike Farnworth, B.C.’s Minister of Public Safety.

The Canadian government has also extended closure of the U.S.-Canada border at least through May 21 with further closures likely.  The closure impacts even the tiny (pop. 45) hamlet of Hyder, Alaska, which gets its supplies and sends its kids to school in nearby Stewart, B.C. Canada has also barred incoming flights from India and Pakistan, both countries experiencing record new cases of the coronavirus.

Earlier, British Columbia had been celebrated for its effective response to the COVID-19 pandemic.  The B.C. government had a very different message last summer and fall: Get out and see the province, with travel elsewhere blocked. Such was the response that B.C. Parks slapped outside-visitor limits even in such remote spots as the Berg Lake-Mt. Robson trail in the Canadian Rockies.  The left-leaning New Democratic Party of Premier John Horgan called a snap election for October and won with an increased majority in the British Columbia Legislature. Provincial health officer Dr. Bonnie Henry did daily briefings and received a favorable profile in the New York Times.

After months of following COVID-19 restrictions, however, residents in B.C.’s densely populated Lower Mainland have greeted spring by coming out of the nest.  Crowds of young people have been pictured on Robsonstrasse in Vancouver.  Dr. Henry has looked at the infection rate and changed her tune. “Community transmission and COVID-19 cases – including variants of concern – have increased in our health authorities, with many cases being linked to non-essential travel within B.C.,” she said in announcing the new rules. “I am calling on everyone to stay in their local communities and support these travel restrictions to stop the most dangerous travel across regional zones.”

The province’s daily briefings have become body counts: 1,006 new cases were reported last Thursday, with 502 people hospitalized and 161 in critical condition. The Friday-Sunday count was 2,491 new cases (for a total of 126,248 in the province) with 484 hospitalized and 158 in intensive care.  The province reported 17 new COVID-19-related deaths for a total in B.C. of 1,571. Such is the pressure that, in dealing with the pandemic, nine Lower Mainland hospitals have suspended elective surgeries.

Canada has been relatively slow getting its vaccine program up and running.  As of Monday, 1.635 million of B.C.’s 6 million plus residents had received a shot of Pfizer, Moderna, or Astra-Zeneca vaccines.  But only 89,035 persons have received second doses.

Canada was settled on the motto of “Peace, Order and Good Government,” so the Great White North has experienced little of the protest and defiance against COVID-19 measures experienced in “the States.” But the new rules in British Columbia have elicited protests from Aboriginal First Nations and civil liberties groups.  “We continue to have several concerns regarding the serious constitutional and privacy issues at stake, as well as potential harmful impacts on Indigenous, Black, and racialized groups,” Harsha Walia of the B.C. Civil Liberties Assn., said in a statement.

The province is moving to soften the impact of its new restrictions.  B.C. jobs minister Ravi Kahlon announced Monday that $25 million (Canadian) in relief money is being set aside for motels and other short-term accommodations forced to cancel bookings while citizens stay home.

Don’t expect to cross the 49th Parallel any time soon.

Joel Connelly
I worked for Seattle Post-Intelligencer from 1973 until it ceased print publication in 2009, and SeattlePI.com from 2009 to 6/30/2020. During that time, I wrote about 9 presidential races, 11 Canadian and British Columbia elections‎, four doomed WPPSS nuclear plants, six Washington wilderness battles, creation of two national Monuments (Hanford Reach and San Juan Islands), a 104 million acre Alaska Lands Act, plus the Columbia Gorge National Scenic Area.
Previous article
Oregon Gains a Congressional Seat (But Where?)
Next article
The Gray Lady Grandly Opts Out of Op-Eds