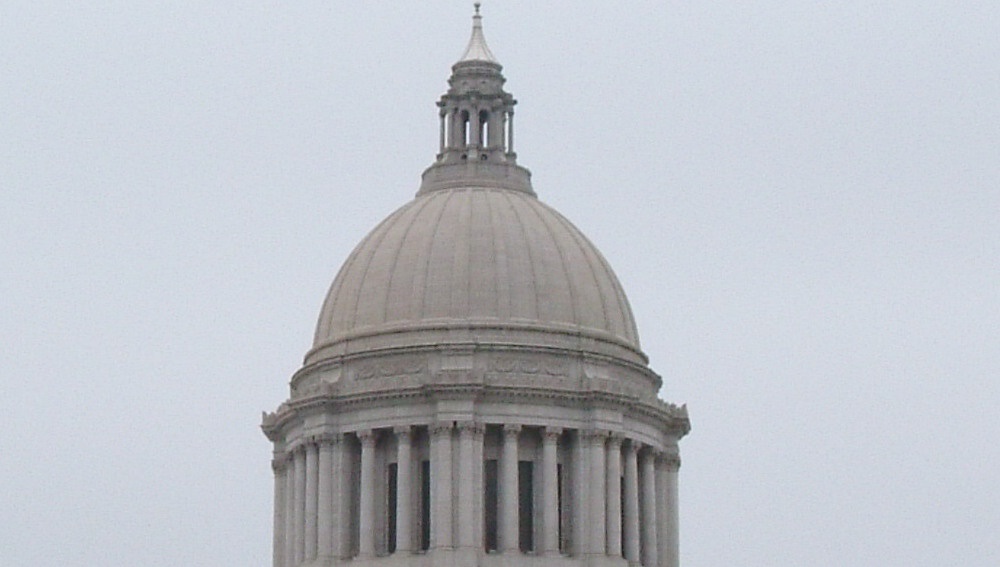 Buried on page 85 of the 376-page capital budget the House passed unanimously¹ last week is a dry proviso rich with symbolic meaning about the state of news coverage of Washington State government: “…The department may sell by auction the Ayers and Carlyon houses, known as the press houses, separate and apart from the underlying land…”

The houses in question, two dilapidated structures on the edge of the capitol campus, have sheltered the statehouse press corps for decades. They’re not known as Ayers and Carylon but as the Blue House and the White House. Under a plan enabled by that budget proviso, they’ll be hauled away by the end of the year, and the handful of reporters who still occupy them will be relocated to smaller offices in the Legislative Building itself.

Rachel La Corte, who covers Olympia for The Associated Press, has been chronicling the decline of the White House for years on her Twitter feed. The White House was not always white and is actually named for the late John White, who was Olympia correspondent for The Associated Press for many years. This month happens to mark the 20th anniversary of my rolling into Olympia, fresh off the boat from Alaska, to serve as one of White’s successors.² So the impending departure of the press houses brings forth both a nostalgic pang and thoughts about the state of journalism.

Spring 2001 was, like spring 2021, the closing weeks of the long session, but the days of monitoring Olympia remotely via the web and TVW were in their infancy. If you wanted the statehouse covered you had to send an actual human being. And in what turned out to be the last good year for the newspaper business, many papers did.

The Seattle Times had three people in Olympia full-time, as did the AP. The Olympian, which then had a devotion to covering state government befitting its state-worker-heavy readership, had two people full-time. The late lamented Seattle Post-Intelligencer³ had one person in Olympia full-time and a second for the legislative session, as did The (Tacoma) News Tribune.

The dailies in Spokane, the Tri-Cities, Yakima, Vancouver, Longview, Everett, and Bellingham all maintained state government reporters, although some were only in Olympia when the Legislature was in session. Both houses were packed to the rafters. If you had interns — and pretty much everyone did — they were lucky if they had desks. The concentration of journalists drew politicians, flacks, and the few lobbyists who didn’t view the press with fear, loathing, or both. Impromptu visits from newsmakers ranging from Tim Eyman to U.S. Sen. Patty Murray weren’t uncommon.

Here’s who’s left, illustrated in the plan to tuck them into a few hundred square feet in the capitol building.

A stark diagram of what’s left of the resident statehouse press corps as it will be housed in the capitol. “NW News” refers to Austin Jenkins and Tom Banse, who report for public radio. “Daily Herald” is Jerry Cornfield of The Herald of Everett.

Most of the decline in the statehouse press corps is at least a decade in the rear-view mirror. The whole idea of office space is a little passé these days. It’s hard to fault the state for moving a handful of people out of space meant for dozens. But because we were there when the houses were full, all those empty offices represent actual people who are no longer covering the news, people who were for the most part driven out of journalism by its demoralizing decline and not replaced when they left.

The late Joe Turner used to cover state government for The News Tribune with a relentless focus on things of interest and importance to his Pierce County readers. His office isn’t empty; the able Sara Gentzler has Joe’s seat at the press table. But she covers Olympia for all the Washington papers owned by McClatchy, which now includes not only the TNT, but The Olympian, the Tri-City Herald, and the Bellingham Herald, all of which used to have their own correspondents watching Olympia. So she’s trying to do the work six people did back in the day. For example, the Tri-City Herald’s last man in Olympia, Chris Mulick, still roams the statehouse halls. But now he’s lobbying for Washington State University, his beloved alma mater.⁴

There have been plans to knock down the press houses for at least 20 years. One of the reasons it didn’t happen in the 2000s was the opposition of David Postman,⁵ who then presided over a three-person statehouse bureau for The Seattle Times in the Blue House’s best space, with a view of the capitol and the fountain. Along with the hassle of moving Postman’s collection of vintage typewriters, losing that office would have forfeited a competitive advantage: The people walking by on their way to influence the elected leaders of the day were signifiers of news, sources on the hoof.

Postman left the Times, and journalism, more than a decade ago, as did his colleague, Ralph Thomas, known for his ability to mine the state budget for news. Neither was replaced. Thomas now runs the communications shop at the Office of Financial Management, where they write the budget. Postman just wrapped up a second act as Gov. Jay Inslee’s chief of staff. A few years ago, the Times moved Joe O’Sullivan, their current solo Olympia correspondent, out of that big front office into smaller space at the back of the Blue House to save a few bucks on rent.

Which gets us to our former employer, The Associated Press. Current AP Correspondent Rachel La Corte gets a cramped 104 square feet in the new setup. During La Corte’s first session in 2005, the AP’s comparatively cavernous space in the White House was full. She had the veteran David Ammons and another full-time reporter. Each year a promising rookie got hired for six months to help cover the Legislature, one of the best entry-level gigs in journalism. One of Rachel’s rookies grew up to be investigative reporter Mike Baker, now of The New York Times.

The AP is a cooperative of the daily newspapers in the United States. A few years after her arrival, the decline of newspapers became the AP’s decline, and the company began systematically gutting its domestic reporting corps, including its statehouse bureaus, which eventually left La Corte alone.

There’s no less news in Olympia than there was 20 years ago. Government has grown larger, politics more fractious, the number of people paid to spin, burnish, obfuscate, or outright distort the events of the day more numerous and skilled. The good news is that there are now more ways than ever to keep track of it. New journalistic endeavors such as Post Alley and the Washington Observer are working to fill the void. But none of that makes up for the loss of so many sharp and skeptical folks actually keeping an eye on things.

This piece is republished from the Washington Observer, Paul Queary’s independent newsletter on politics, government, and the influence thereof in Washington State. If you’re not a subscriber, click on this hyperlink and sign up. It’s free — for a little while longer.

1. The capital budget, AKA the construction budget, is one of the genuinely bipartisan things the Legislature does every year. It’s full of tasty state and federal money for all manner of projects in every lawmaker’s district. Everybody gets taken care of because all that spending requires the state to issue bonds, which requires a supermajority, which means the majority party has to make the minority party happy.

2. Because Juneau, Alaska’s capital city, is not connected to the rest of the world via road, I and my elderly Honda Civic made the trip to Bellingham via Alaska state ferry. The clutch on that vehicle, which had not been up to highway speed in three years, gave up the ghost on Interstate 5 a few miles later.

3. Yeah, yeah, the brand survives at seattlepi.com, but the paper’s dead. And may the dogs of Hell gnaw the bones of the Hearst suits who killed it.

4. Seriously, I challenge you to find a more devoted Coug. The man’s collection of maroon ties and suspenders is unmatched.

5. Postman’s then-groundbreaking political blog from his later years at the Times is one of the Observer’s influences. Somewhat bizarrely, he was recently named chair of the Washington State Liquor and Cannabis Board.

Paul Queary
Paul Queary, a veteran AP reporter and editor, is founder of The Washington Observer, an independent newsletter on politics, government and the influence thereof in Washington State.
Previous article
The Day The Zags Got Gassed
Next article
To Have a Democracy, You Have to Let People Vote