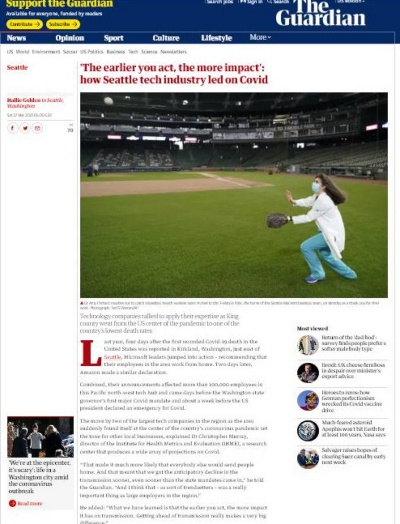 The Guardian has a good story today exploring the role of local tech companies in driving down the rates of COVID morbidity in the Seattle area. It’s a notable example of corporate leadership, reliance on good data and innovations, and extensive public-private coordination.

About 100 local tech companies were involved, the story reports, often meeting near-weekly to share information and make assignments. Among the key actors: Accolade, Amperity, Amazon, Expedia, Facebook Seattle, Qumolo, Microsoft, Starbucks Tableau, and Zillow. Another coordinating entity was Challenge Seattle, an organization of top CEOs led by former Gov. Chris Gregoire, which put pressure on Gov. Inslee to move faster (particularly in opening schools) and helped round up vaccines and protective equipment by putting the arm on suppliers.

The Guardian article sums up the impact:

While many factors have surely contributed to such a significant change, health and business experts in the region point to the role that the local tech industry has played from the virus’s earliest days. From Microsoft and Amazon to Qumulo and Tableau, these companies worked across sectors and in some cases with key competitors to spearhead and support the effort to combat this deadly virus and help those most affected by it in their own backyard.

The story recalls other times when the progressive business community has driven big local change, such as the 1962 World’s Fair and the 1990 Goodwill Games. In the past, Boeing would be the pacesetter, with other companies finding their proper levels once Boeing weighed in. Microsoft now plays that role, with the company’s president, Brad Smith, the main orchestrator. Another key actor was Jill Singh, who helped pull together a remarkably fast fundraiser called All In Seattle. Singh is a community volunteer and wife of Rajeev Singh, CEO of the local healthcare tech company, Accolade.

Coordinated public-private leadership like this has to be much less public than in the past, given the anti-corporate mood of Seattle politics. This recent illustration of business muscle also differs in the way company employees were involved in programs and hatching ideas. Whether this teamwork continues after the ad-hoc emergency of the coronavirus is an open question, given the very different political agendas of the large companies in our midst. Even so, the COVID victories were a notable (though largely un-noted) illustration of what Seattle’s innovative business community can do in driving political action.