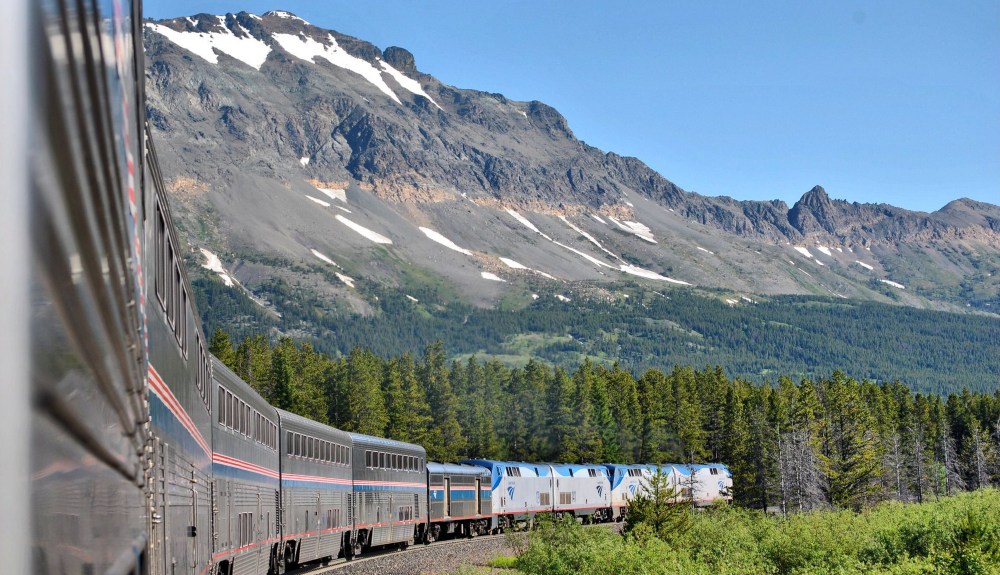 An historic passenger train crossing the Northern Tier of the United States, Amtrak’s famous Empire Builder, will be restored by the Biden Administration’s American Rescue Plan and will resume daily service between Seattle and Chicago on May 24. Tucked away in the $1.9 trillion plan is $1.7 billion for Amtrak — $970 million for East Coast corridor service that Joe Biden famously used, the rest to resume daily service on a dozen long-distance routes.  The City of New Orleans, celebrated in song by Arlo Guthrie, is another of the trains being brought back.

To serve our corner of the country, the Empire Builder and the Coast Starlight (sometimes nicknamed the “Coast Star-late”), which links Seattle with Los Angeles, will fully revive. Amtrak will “sustain and restore operations and recall more than 1,200 furloughed employees through the remainder of Fiscal Year 2021 and into FY 2022,” it said in a statement.  Added Amtrak CEO Bill Flynn: “This critical funding will benefit the entire Amtrak network, our state and commuter partners, customers, and employees.”

The Empire Builder was once a signature train for the Great Northern Railroad, advertised by a drawing of a mountain goat.  Then and now, the train gives a sense of America’s vast spaces and scenic grandeur. As a kid, the train introduced me to peaks of Glacier National Park, the expanse of eastern Montana and North Dakota, and the Mississippi River. Years later, a German exchange student friend emerged wide-eyed at the expanse of America and a wildness, contrasting to his well-ordered country.

I took the Empire Builder home from college each summer, straining for the first sight of the Rockies rising out of the Great Plains, and the peaks around East Glacier.  Years later, I would interview Karl Rapphold, who runs a 7,000-acre Rocky Mountain front range cattle ranch pioneered by his grandfather 130 years ago.  One challenge of his job was keeping cattle apart from one of the largest grizzly bear populations in this part of the range.

U.S. Rep. Rick Larsen, D-Wash., a senior member of the House Transportation Committee, represents Everett, from whose restored depot the Empire Builder heads east toward the eight-mile tunnel that will carry it under Stevens Pass. “Amtrak and its dedicated workforce keep the Northwest moving,” said Larsen.  “The American Rescue Plan delivers critical relief to get Amtrak employees safely back to work, restores daily service for Empire Builder and Coast Starlight trains, and helps Washington recover lost revenue due to decreased ridership on the Amtrak Cascades route.”

What is the American Rescue Plan doing rescuing Amtrak?  The COVID-19 pandemic has driven down ridership and forced service on long haul routes back to three days a week.  The Cascades route saw its northern destination denied with closure of the U.S.-Canada border. (Gov. Chris Gregoire and then-B.C. Premier Gordon Campbell used the 2010 Vancouver Winter Olympics to expand the regional Amtrak route and make it easier for Canadians to come south.)

The airlines have improved air circulation and moved to keep passengers apart, but travelers must still line up and wait at airline terminals and gates. As Andrew Villeneuve of the Northwest Progressive Institute points out. However, “unlike airlines, Amtrak offers private rooms on its long-distance trains. It is thus possible to practice physical distancing while taking a train across the country.”

And getting off.  Villeneuve has done what I twice did riding the rails home from college, getting off the train for an overnight stay and hike in Glacier Park. What a corner of America!