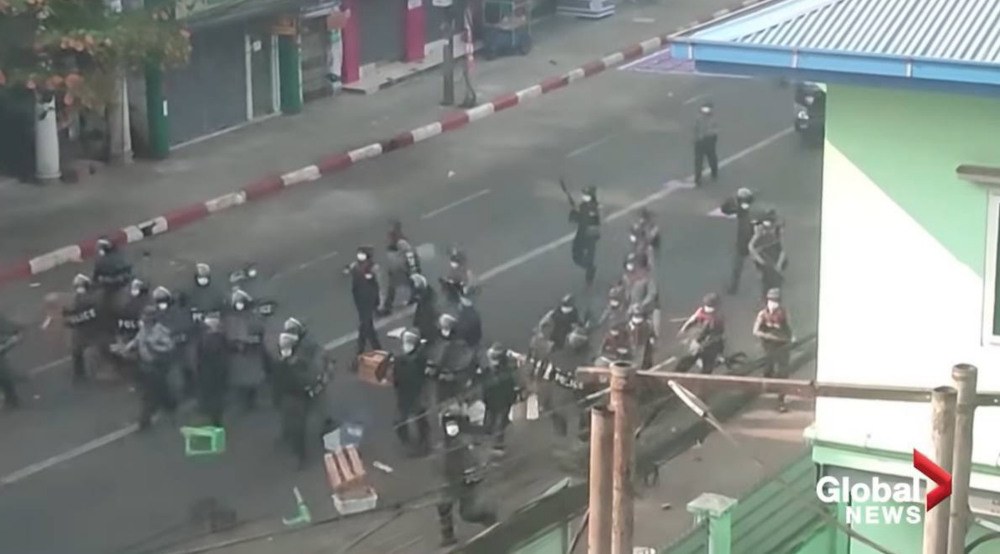 Bodies in the streets of Yangon. Military patrols snatching elected officials and protest leaders from their homes in the dead of night. Armored vehicles moving against marchers armed only with posters and courage.

Myanmar’s junta is resorting to instinctive brutality to crush protests of its Feb. 1 overthrow of an elected government, igniting fears of widespread bloodletting as it struggles to restore the world’s longest-running military dictatorship.

Older generations have painful memories of the unbridled violence unleashed by the cabal of generals to put down pro-democracy revolutions in 2007 and 1988. In the weeks since the latest coup brought thousands into the streets each day, the death toll among demonstrators is reported to have surpassed 200 – already more than the 138 killed during the 2007 “Saffron Revolution.”

While the military’s knee-jerk turns to terror have worked to halt opposition movements since Myanmar’s 1948 independence from British rule, much has changed since prior rebellions, inspiring hope for restoration of the recent, short-lived democracy.

Myanmar was among the least technologically connected countries in the world a decade ago. In 2012, the country of 54 million had one of the lowest penetrations of mobile phone usage. In contrast, SIM cards in use now outnumber the population and Internet is accessible over wide swaths of the country, according to Pwint Htun and Paula Bock, co-founders of Mobilizing Myanmar, a project commissioned by the Bill & Melinda Gates Foundation to empower women.

“The coup threatens to destroy women’s recent gains in a society that has long excluded them from the formal economy and leadership in business and government. That is also why millions of women – bank clerks, civil servants, teachers, grocery worker and laborers who enable society to function – are pivotal in the continuing nationwide strike to protest dictatorship,” Htun and Bock wrote in an opinion piece published on websites around the world.

The wildfire spread of connectivity allows today’s protesters to organize civil disobedience, share intelligence on the military’s movements to evade arrest and to document the use of lethal force against unarmed demonstrators.

“These Myanmar military tactics are far from new, but their killing sprees have never before been livestreamed for the world to see,” Joanne Mariner, Amnesty International’s director of crisis response, observed in a report by the rights group last week.

Myanmar women are also using low-tech tactics, the Mobilizing Myanmar authors noted, like exploiting a prevalent male superstition about proximity to clothing that has “touched women’s private parts.” Colorful sarongs and used sanitary napkins, widely believed among the lower ranks to sap male libido, are being strung up across streets and neighborhoods as psychological force fields against marauding soldiers.

Strikes called by the protesters in demand of restoration of democracy are disrupting banking, health care, transport, trade and services. Military attempts to silence the buzzing Internet and snarl protesters’ organizing and strategy have also thwarted the government’s ability to conduct business.

Independent reporting on the coup and its aftermath, from inside Myanmar and from exile networks abroad, has exposed in real time the military’s excesses and added perspective to the latest crackdown that was lacking in previous confrontations. While the country’s few independent newspapers have been shuttered by the junta, online news media advocating for greater democracy have growing audiences the regime never previously had to contend with.

The latest issue of Frontier Myanmar, a five-year-old biweekly online magazine, chronicles the military’s targeting of journalists with lawsuits and arrests with the so-far-unsuccessful aim of stifling the truth about the army’s behavior.

Myanmar Now, an online newspaper curated from Thailand and Norway, reports daily on the fate of ousted leader Aung San Suu Kyi and the military’s trumped-up charges against her. The website also discloses the latest killings of protesters, arrests and stealth kidnappings of political and student leaders.

Other prominent figures in Suu Kyi’s National League for Democracy, the party that won an overwhelming victory over military candidates in a November 2020 election, have been arrested or gone into hiding. Some of those still at large have formed a sort of government-in-exile that has vowed to press on with the “revolution” against the junta.

“This is the darkest moment of the nation and the moment that the dawn is close,” Mahn Win Khaing Than, the ranking member of the Committee for Representing the Union Parliament, told the BBC in his first public address from his clandestine location.

On Wednesday, Myanmar Now reported that the powerful state-administered Buddhist Monks Association has warned the junta to cease attacks on peaceful protesters or it would “halt activities,” a signal of its departure from collaboration with the regime.

Civil disobedience organizers and information networks thrive in the digital era of opposition, like the Assistance Association for Political Prisoners that keeps tabs on casualties. The AAPP reported this week that at least 217 deaths among protesters have been confirmed.

The escalating violence committed by the military may be fostering unity among Myanmar’s Buddhist majority and ethnic minorities who have suffered at the hands of soldiers. Human rights organizations accuse the army of genocide in the brutal expulsion of hundreds of thousands of stateless Muslim Rohingyas to neighboring Bangladesh in 2017. Suu Kyi’s Nobel Peace Prize was rescinded over her perceived complicity in the crime of ethnic cleansing.

The generals may seem unafraid of further tarnishing a legacy of bloody repression by reversing course on the modest reforms executed under their power-sharing concessions in 2011. But excessive force against peaceful protesters carries new risks this time as the military brass have benefited as much as, if not more than, the emerging middle class from the foreign investments and thriving tourism in the few years of a nascent democracy.

Billions of dollars in joint ventures with China, Singapore and Thailand are at work building power generation facilities, mining, manufacturing and consumer services that could be curtailed by Western partners unwilling to be associated with the military reversion to iron-fisted rule.

The United States and Britain have imposed sanctions on the upper echelon of the junta and European Union nations are readying similar action. All 15 members of the U.N. Security Council last week endorsed a statement that “strongly condemns the violence against peaceful protesters” and called on the military to “exercise utmost restraint.”

China, Russia and Vietnam objected to stronger language or use of the word “coup” in an earlier draft of the statement. That the authoritarian allies put their nations’ signatures to any message of censure was noteworthy, nonetheless, as was the Chinese Embassy in Myanmar’s statement on the importance of the international community speaking “in one voice.”

China, the biggest foreign investor in Myanmar, has taken a harsher tone with the junta since several Chinese-owned factories in Yangon were set on fire over the past few nights. Beijing urged the military to “take further effective measures to stop all acts of violence, punish the perpetrators in accordance with the law and ensure the safety of life and property of Chinese companies and personnel in Myanmar.”

One of the most powerful forces driving the students and young adults at the forefront of the pushback against the generals may be that they came of age at a time of faith that the country was on a course for strengthening democracy. Their parents and grandparents retain memories of past times of terror and vow not to go back again.

“For more than 60 years, Myanmar has been subjugated by illegitimate military rulers, whose crimes were hidden from the eyes of the world. The junta is trying to crush a new generation, but this time, the world can witness its aggression against civilians in real time,” the Mobilizing Myanmar founders proclaimed in their op-ed, citing grandmas shuffling along dusty roads in the countryside carrying placards proclaiming: “The dictators must fall before I die.”

Carol J Williams
Carol J. Williams is a retired foreign correspondent with 30 years' reporting abroad for the Los Angeles Times and Associated Press. She has reported from more than 80 countries, with a focus on USSR/Russia and Eastern Europe.
Previous article
Windfall! Most Cities Really Don’t Need all that COVID Relief Money
Next article
The Politics of the Violence Against Women Act