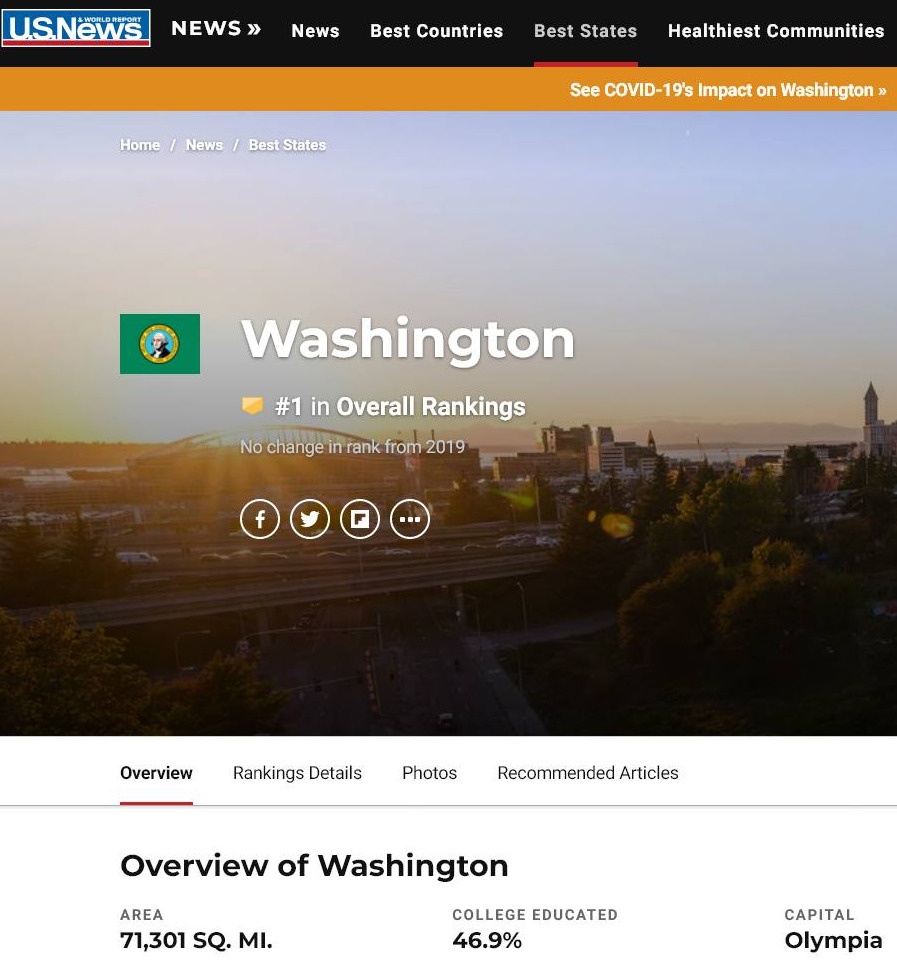 US News Declares Washington ‘The Best State.’ Hold the Champagne — It’s Not.

This is all baloney. You know that, but let’s talk about why.

We’ll go back to the Indexer’s favorite economic concept—spatial equilibrium—which states that all places offer the same total value proposition in the long run. Within that value proposition are series of choices that we all make that signal what is important to us, and also cost constraints that can limit those choices. All the US News rankings tell us is what is important to the editors if there are no constraints.

We’ll begin by lifting text from a recent Indexer story on Boise:

“We start with a foundational theory from urban economics: the Rosen-Roback framework. In its simplest form, it says:

“Where W is wages, A is amenities/quality of life, and C is the cost of housing plus commuting. The net of these factors is U, utility, which simply means the total value a person gets from living in a place.

“Now get ready for this: U is the same everywhere over the long term. The utility of Santa Barbara or Honolulu is the same as the utility of a threadbare town with a shuttered mill and an abandoned downtown. But if we play with the numbers, this makes sense. In a wealthy, attractive place like Seattle, high wages and amenities are offset by high costs. In a depressed place, low wages and amenities are offset by low costs.

“We end up gravitating to the place that offers the combination of employment opportunities, amenities, and costs that reflects what we find important in our lives.”

This does not look much like our formula above. Two of the three factors in the Rosen-Roback framework, wages and costs, are lumped into just one of the eight categories, opportunity, which itself gets just 12 percent of the weight. The other seven categories fall somewhere into the amenity factor of the spatial equilibrium model.

In other words, wages, which allow us to afford nice amenities, and costs, which determine how much we have to pay to get access to those amenities, are both afterthoughts for US News. Better title: “Best States If You Can Afford Them.”

Two more caveats. First, on the cost of housing and cost of living scales used by US News, Washington ranks 47th and 38th worst respectively, but the low weight given to costs does not affect Washington’s ranking. Second, the cost of living scale used by US News only applies to the basket of goods and services purchased by people in the upper quintile of incomes who, of course, can live pretty much anywhere they choose.

Not surprisingly, the Washington Governor’s office was all over this. Instead, they should spend time figuring out why we have the fourth worst housing affordability in the nation and why we have created a state that works really well for the affluent but not so well for everyone else.

Michael Luis
Michael Luis is a public policy consultant who has been wrestling with housing, growth and economic development issues around Washington State for over 30 years. He is author of several books on local history and served as mayor of Medina.
Previous article
Has Seattle Become a City that Doesn’t Work?
Next article
Northwest Congressfolk Team Up to Keep Federal Archives in Seattle