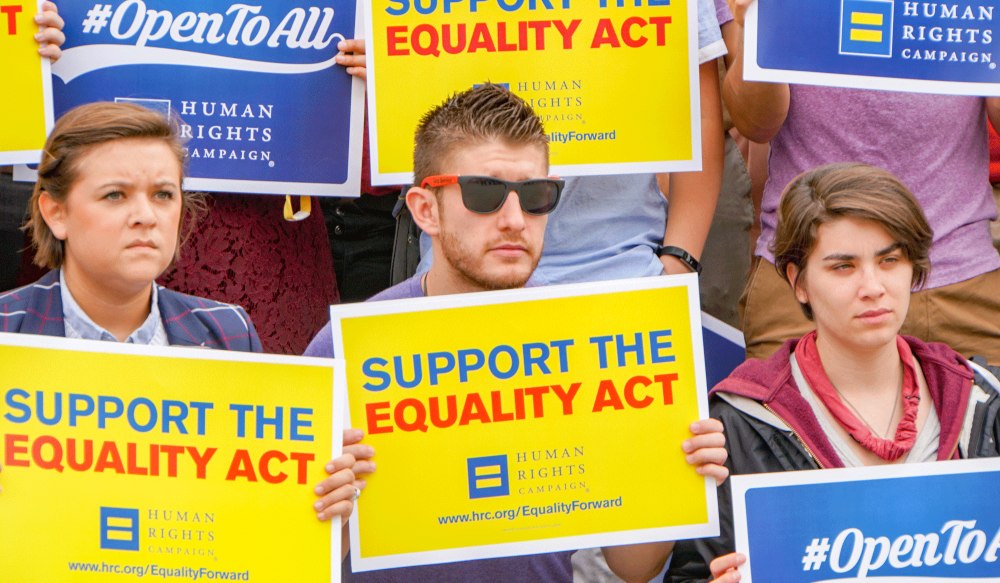 Between Religious Liberty and Gay Rights

No two issues are more polarizing and divisive than religious freedoms and LGBTQ protections.  When the two are entangled in legislation that may compromise one or either, you can expect a landmark outcome that will end up at the Supreme Court.

This conflict gets to the soul and guts of our cultural identity as it plays out in the public square.  If you are a person of faith, is it possible to reconcile your religious beliefs with the social norms that accompany the LGBTQ community?   If you are part of the gay movement, can you accept the various aspects of religious freedom guaranteed by the U.S. Constitution?

Many members of Congress in both parties are locked into their respective positions.  Whether a Democrat or Republican, they must cope with well organized stakeholders, fortified by heavy lobbying on both sides that make any compromise unlikely.  The political equation does not add up to a favorable outcome for either side, though creative compromise is still possible (see below)..

For Democrats, protecting gay rights is a high priority.  In 2019, shortly after Speaker Nancy Pelosi’s party took control of the U.S. House of Representatives, the Equality Act passed with almost all Democrats and few Republicans voting in favor of it — but with no expectation that the Republican-controlled U.S. Senate would even consider it. This year, on February 28, the bill passed with a House vote of 224 to 206 with only three Republicans in favor.

The Equality Act is designed to guarantee LGBTQ Americans protection from housing, employment, and public-accommodations discrimination under federal law, protections that are lacking today.  Those who oppose the Equality Act were fearful that the legislation would strip away religious protections guaranteed by the U.S. Constitution.  Andrew Walker, a member of the Ethics and Religious Liberty Commission of the Southern Baptist Convention, sounded the alarm, stating “the Equality Act represents the most invasive threat to religious liberty ever proposed in America.”

That’s an exaggeration, but many believe the Equality Act will undermine the Religious Freedom Restoration Act, a bill that passed with overwhelming bipartisan support and signed by President Bill Clinton.  Their concern is that by asserting claims of discrimination based on gender identity or sexual orientation, religious rights would not have guaranteed protections.

If and when the Equality Act reaches the Senate, a better way would be to focus on seeking a consensus that preserves the First Amendment’s Establishment Clause while fulfilling the most fundamental rights of any democracy, to end discrimination in all forms.

While the Constitution is about separating church and state, these days the conversation is more about faith and politics.  Whatever the approach, I think it is possible to avoid the inevitable fork in the road.  Going left, the destination is the Equality Act with its unwavering backers in the driver’s seat.  Turning right will lead to the so-called First Amendment Defense Act, that would pre-emptively shield those who object to or discriminate against same-sex marriages because of religious beliefs or moral conviction, leaving gay people wholly unprotected under Federal law.

Fortunately, there is a middle road.  For the past eight years, a coalition of moderates, representing both LGBTQ and religious advocates, have been working tirelessly on a roadmap that’s reflective of both sides.  Their proposal, the Fairness for All Act (FAA), if enacted, would prohibit discrimination on the basis of sex, sexual orientation, and gender identity, and protect the free exercise of religion.

Its original sponsor, Rep. Chris Stewart, a Utah Republican, describes it as “banning discrimination against the LGBTQ community without infringing on religious liberty.”   Recently quoted in the Salt Lake Tribune on February 26, he gives this explanation:  “The country  can accommodate both individuals and religious freedom.  It is time to define the federal protections for our LGBT and religious friends and neighbors.”  His bill is patterned after landmark legislation passed by the Utah Legislature in 2015 that was designed to protect both gay rights and religious beliefs.

For most congress members, any prospect of supporting or endorsing the FFA will be met with angst, if not outright hostility, from their support bases.  As is typical in Washington, D.C.,  hyper-partisanship makes unlikely any compromise, especially on delicate social and cultural issues.

It was not always thus. When I served in Congress in the 1970s-80s as both a person of faith and a progressive, I faced a similar dilemma, whether to allow prayer groups on school campuses.  Senator Mark Hatfield (R-OR) approached me to co-sponsor his newly crafted bill, the Equal Access Act (EAA).  It was straight-forward legislation, based on a state Supreme Court decision, to allow high school students the right to hold non-curriculum student-led prayer groups and bible studies on school campuses.

The EAA passed with sizable margins in both the House and Senate and was signed into law by President  Reagan on August 11, 1984.  Over the next few years, a series of lawsuits led to a 1990 Supreme Court decision that ordered schools to allow religious groups to meet, thus validating the EAA. Several years later, a court ruling allowed the EAA provisions to include LGBTQ groups, thus extending similar rights to assemble on high school campuses.  It became the norm that high schools would have to extend similar protections to gays or ban all non-curricular clubs (those of faith) from such activities on school property.

If the Hatfield-Bonker bill had included a provision that would have LGBTQs enjoying the same protections as faith-based groups, it would have been doomed at the outset.  Yet the EAA ultimately achieved something that was unimaginable at the time — balancing LGBTQ rights and religious protections.  Whether by Congress or the courts, it could happen again.

Don Bonker
Don Bonker is a former Member of Congress from Washington’s Third District and former chair of the House Foreign Affairs Subcommittee on Trade. He now lives on Bainbridge Island and consults on international trade issues.
Previous article
Remembering Charlie Brydon and Seattle’s Long March to Gay Rights
Next article
Remembering Pianist Deems Tsutakawa: On and Off Court