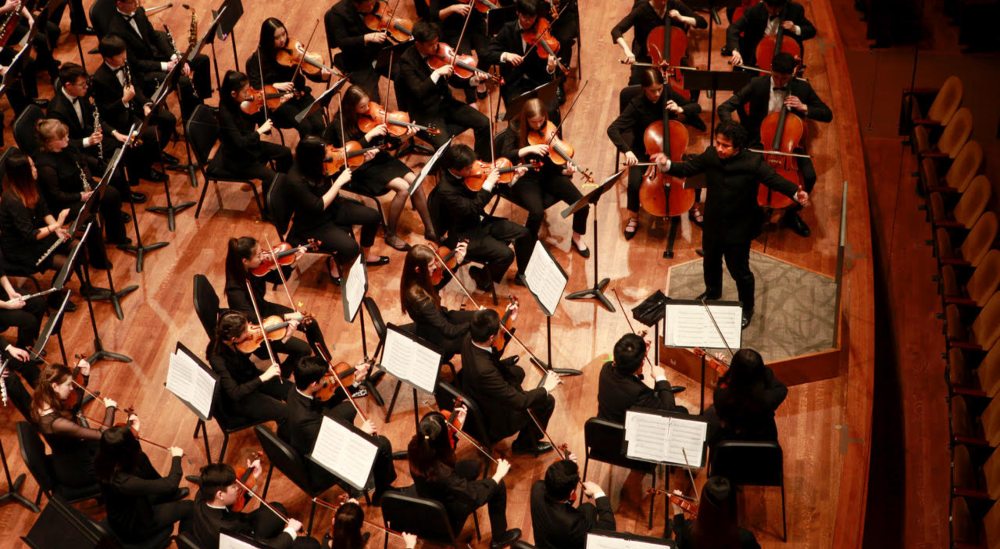 Seattle Youth Symphony: What Building Back Better Sounds Like

Last March the Seattle Youth Symphony Orchestra – one of the country’s leading training grounds for young musicians – was rehearsing for a spring concert. Kathleen Allen, SYSO’s executive director, remembers the rumbling backstage with news of the first Covid-19 death in the state. “And then it just came to a screeching halt when the governor issued the quarantine mandate,” she says.

That sudden quarantine meant no more live rehearsals or performances, no audience, a reduction in enrollment fees and a future unknown.  Allen cut her staff of nine to seven, with four working part-time, cancelled the summer camp program, saw tuition earnings fall by two-thirds, and eventually cut SYSO’s overall budget from $2.1 million to $800,000.

But the conversation within SYSO focused less on money than on how to re-engage students.  Unlike the Seattle Symphony, SYSO is primarily a learning institution, one facing a very different challenge. With the shutdown, it could no longer gather hundreds of young musicians for in-person teaching and rehearsals.  Repetition in learning is critical, Allen says, “If you take a year off, you’re going to de-motivate, your skills are going to go down, so we found parents wanting to send their students somewhere else.”  Adds SYSO Music Director Juan Felipe Molano, “We couldn’t just keep cancelling programs, we had to find a way to serve students.”

The search for a new kind of engagement with students began in late spring, as Molano worked virtually with small groups via Zoom. But the real breakthrough came last summer with a week-long virtual teaching program replacing the usual summer camp.  There was doubt at first – how can you take a full orchestral experience and put it online – but it worked.

Allen credits the students. “Kids are so amazing and resilient and adapt to all kinds of environments and by the end of this online week they had made friendships online, they were in chats, made plans to hang out and play video games later.  It gave us the confidence to take that format and put it up at the level of our academic year program.”

That they did – with virtual coaching, virtual rehearsals, later a full concert all with SYSO musicians performing in their own homes, connecting digitally, seeing their conductors and other students in tiny boxes on screen. Smaller groups – in Zoom language “breakout rooms” – met on Saturday rehearsal days to focus on their own instruments – strings, woodwinds, brass, percussion.

Stephen Bleakley-Harris, who plays clarinet, came on screen from a special basement room in his home set up as a teenage hangout.  It was perfect, he says, for virtual practices and performances.

“In some ways, the pandemic and lockdown have helped with my clarinet practice because me and my family all created a daily and weekly schedule when the lockdown started to make sure that we all stayed productive and kept to a routine. It certainly helped with my practice because practicing my music was one of the main things that I could do every day.”

Stephen’s father, David Harris, says  “one of the biggest challenges to parents over the past year has been finding safe ways to maintain our kid’s sense of community and social interaction and SYSO found a way to offer this. It has been a constant in a turbulent, uncertain period and as parents, we are grateful.”

That was the goal for Music Director Molano – to not let up on discipline, on expectation, on progress. “You have to go beyond your job responsibilities because you know how much it will impact their lives.  We are not doing this to create professional musicians; we are doing this because whatever profession they pick they will be excellent.”

Molano, was not only able to conduct, but ultimately discovered how to enhance the experience in ways that would not have been possible in person: showing video of professional orchestras playing sections of the music, bringing in student musicians from other parts of the world, and an unexpected benefit — to sharing full music scores on-screen.

“Having the full context of the music is such an important part of symphonic study, but often in a full orchestra rehearsal, conductors feel pressed for time and dive right into the playing”, he says. “Over Zoom, however, I can share the score on my screen and highlight important passages, literally circling the measures that I am discussing.”

In a quarterly newsletter to SYSO parents and supporters, Allen and Molano list a number of unexpected benefits from this year in the virtual realm.

Virtual, of course, is not live; boxes on screens fall short of personal contact, but digital togetherness has kept learning alive and the mission of the SYSO intact. Stephen Bleakley-Harris says yes, he’s in a room with people, but that room is a computer screen. It all works, but he misses the old norms.

“Would I ever want to repeat it? Absolutely not! But has it been interesting – have I learned from it? Yes. I’ve gained more appreciation for the social contact that comes with being part of the SYSO community. I’ve missed it and am looking forward to when this is all over.”

For both Allen and Molano, these past months count as much more than survival; SYSO stayed intact, but also found a way to keep alive its most important task, the teaching and development of young musicians.

In the end, as everyone connected with SYSO knows, after living with and surviving the impact of Covid, what often saves us in existential moments are those two essentials – resilience, and adaptation.

To watch how it all worked, see SYSO’s virtual December concert here:

The orchestra’s next performance is March 7.