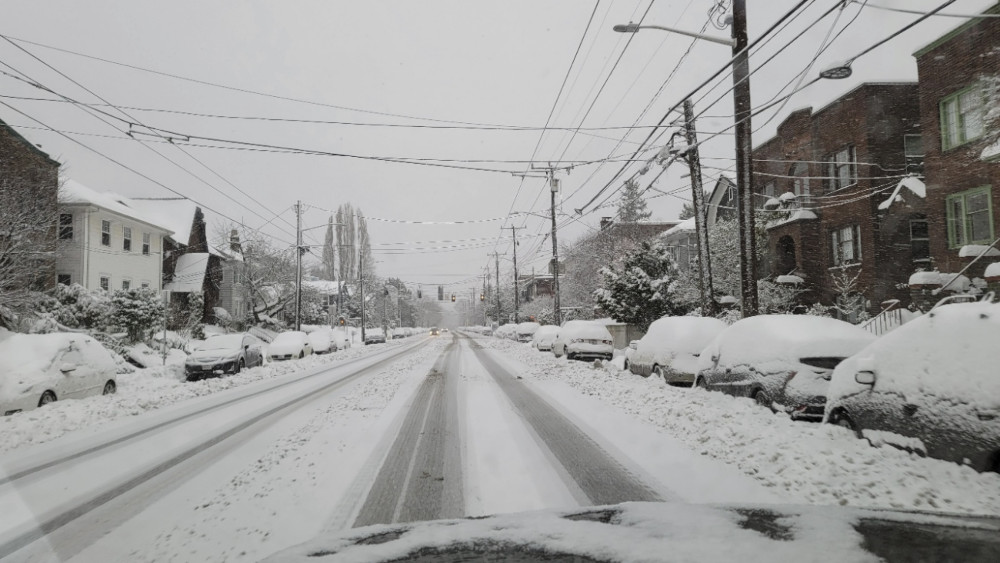 Seattleites have long had a love-hate relationship with snowy weather, just as they did over the weekend when the region was blanketed with shovel-loads of the white stuff.

Some Seattleites adore the snowy weather that they usually have to drive to mountain passes to enjoy.  When snow levels sink to 100 feet, these snow lovers waste no time waxing skies and breaking out sleds and snowboards. It’s a perfect excuse to show off their REI togs and Patagonia parkas.

Others Seattleites, however, cringe at the very mention of the forecaster’s scariest three words: “lowland snow expected.” Oldtimers can remember that famous newspaper lede from the San Jose Mercury, printed during one Seattle snowpocalpse: “Fear swept the streets of Seattle last night, but the snowplows didn’t.”

Recent transplants from snowier regions make fun of Seattle’s love/hate relationship with snow. Those are the folks who are always telling stories that start out like this:  “When I was a kid, I had to trudge miles through five-foot drifts to get to school.” Midwest expats don’t necessarily endear themselves when they tell snow jokes about Seattle. They sling mean one-liners like: “I’ve never seen anything like Seattle grocery stores when locals panic, preparing to brave 3-4 inches of snow.”

Among themselves, these newcomers chortle over Seattle snow driving with observations like: “Who’d dream of seeing so many Subaru Outbacks losing control in one place.”  Or “It’s like Mad Max with Amazon vans.” Or even: “I love seeing the region’s single snow plow stuck on I-5.”

But whatever one may think of the sick Seattle snow jokes, there’s also a serious political side to the occasional snow event in the city. Like that time in 2008 when snow paralyzed the city for two weeks in December. Things got ugly. Turns out the employee in charge of snow response had left his number two in charge. Neither man had any experience.

Among their worst mistakes: they refrained from using rock salt for environmental reasons. They didn’t clear packed snow and concentrated on West Seattle, home to Mayor Greg Nickels, Deputy Mayor Tim Ceis and Seattle Department of Transportation director Grace Crunican.  And, oh, anyway, Crunican had spent the Christmas holiday in Portland. On Christmas Day, there were 11 slow plows out of use, allegedly because they needed “to rest.”

In the aftermath of the snow, Mayor Nickels, Deputy Ceis and Councilmember Richard Conlin, the Council’s transportation chair, all had good things to say about the department’s response. Asked by the Seattle Times, the mayor said he give himself a B-minus.

That was the wrong political response. In fact, that led pundits to believe the snow debacle may have caused the progressive two-term mayor (good on transit, good on gun control, good on the economy etc.) to lose his primary bid for a third term.

One who couldn’t quite get the snow thing to work for him was Charlie Chong, the West Seattle              activist. In the 1990s, he had tried unsuccessfully to get the city to invest in cheap snow removal equipment. “Snowplow Charlie” was popular as a city councilmember but couldn’t pull off any of his three runs for mayor.

Then there’s Seattle’s Mayor Jenny Durkan who has decided not to seek reelection. She managed to chalk up a fair score during the 2019 snow and hasn’t provoked outcry over this February’s event. But never say never when it comes to keeping a city running during inclement weather. It’s still February and it’s never too late for a return of the Seattle Freeze.

Jean Godden
Jean Godden wrote columns first for the Seattle Post-Intelligencer and late for the Seattle Times. In 2002, she quit to run for City Council where she served for 12 years. Since then she published a book of city stories titled “Citizen Jean.” She is now co-host of The Bridge aired on community station KMGP at 101.1 FM. You can email tips and comments to Jean at jgodden@blarg.net.
Previous article
Can a Conservative Idaho Republican Bring Sockeyes Back to the Salmon River?
Next article
Turning in Dad (or Mom): Families Grapple with their Capitol Insurrectionists