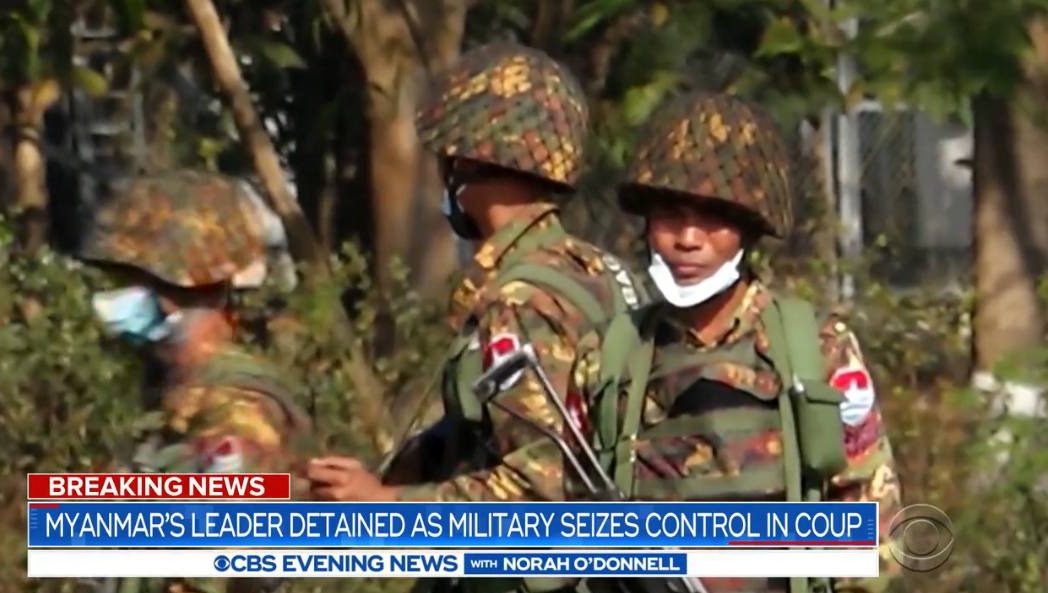 It seems fantastical to imagine that a U.S. president’s failed attempt to overturn an election he lost should inspire a coup in a far-off country he probably couldn’t find on a map. But ex-President Trump’s example has encouraged and enabled right wing authoritarian populists from Brazil to Poland to the Philippines. Why shouldn’t it inspire the  generals in Myanmar?

The coincidence is, to say the least, striking. A few days after Americans rejected Trump by a margin of 7 million votes, Myanmar’s National League for Democracy (NLD) won a much bigger parliamentary landslide over the military’s proxy party. The country’s election commission and the watching world declared the election free and fair, despite the disenfranchisement of many members of its many restive and aggrieved ethnic minorities. (Their votes wouldn’t have changed the outcome; they tend to loathe and fear the military even more than they resent the NLD for failing to curb it.)

The generals grumbled, Trump-style, that the election was rigged, and rumors flew of an impending backlash. Then, on Monday, they did what Trump and the mob that stormed the Capitol failed to do. They overturned the elected government and arrested its leadership and many civil-society leaders. Among those detained is the NLD’s guiding light, Aung San Suu Kyi, 75, who, though barred from the presidency by a military-drafted constitution and tarnished by her support of the army’s genocidal campaign against Rohingya Muslims, still commands the party and the loyalty of a citizenry that still sees her as the best hope for democracy.

It’s not the first time the military, which first deposed a civilian government in 1962, has overturned an election. But it’s the first time since 1990, when, in a bid for legitimacy after brutally suppressing a pro-democracy uprising, the military called a vote it expected to win. When it became clear the NLD would win, the generals stopped the count, hardened their rule, and continued enriching themselves and impoverishing the rest of the country.

By 2015, that rule was fraying under sanctions and mismanagement. The generals let the NLD participate in elections again, under a constitution that reserved for the military the security ministries and a quarter of parliamentary seats, and protected soldiers from prosecution. The idea was supposed to be a “balanced” transition to democracy, with which Suu Kyi complied at the cost of her once-saintly reputation. But letting go is hard to do, especially for authoritarian kleptocrats. The current chief general, Min Aung Hlaing, has hung on past the date he was supposed to turn over command and reportedly talked of becoming president himself.

The Biden administration has denounced the recent post-election takeover and threatened new sanctions. But the sanctions it already enforced against various military figures, including Min Aung Hlaing, didn’t deter the putsch. The U.S. government has limited leverage in Burma (as it still calls the country in defiance of a name change enacted by the junta). The real economic power there is China, which has no scruples about crushing democracy as long as it gets to plunder the country’s rich resources, from timber and hydropower to the elephant skin newly prized in “traditional” medicine.

Biden should have at least one Republican ally in trying to punish this assault on an election. Ironically enough, that ally would be Senate Minority Leader Mitch McConnell. The wily Kentucky Republican is perhaps the most steadfast and outspoken congressional defender of democracy in Myanmar. From Aung San Suu Kyi to Mitch McConnell, people are often more complicated, and less uniformly saintly or devilish, than their reputations.

Eric Scigliano
Eric Scigliano has written on varied environmental, cultural and political subjects for many local and national publications. His books include Puget Sound: Sea Between the Mountains, Love War and Circuses (Seeing the Elephant), Michelangelo’s Mountain, Flotsametrics and the Floating World (with Curtis Ebbesmeyer), The Wild Edge, and, newly published, The Big Thaw: Ancient Carbon and a Race to Save the Planet.
Previous article
Jeff Bezos, Master of Inventions, Reinvents Himself
Next article
Shock and Awe: The Greening of Joe Biden