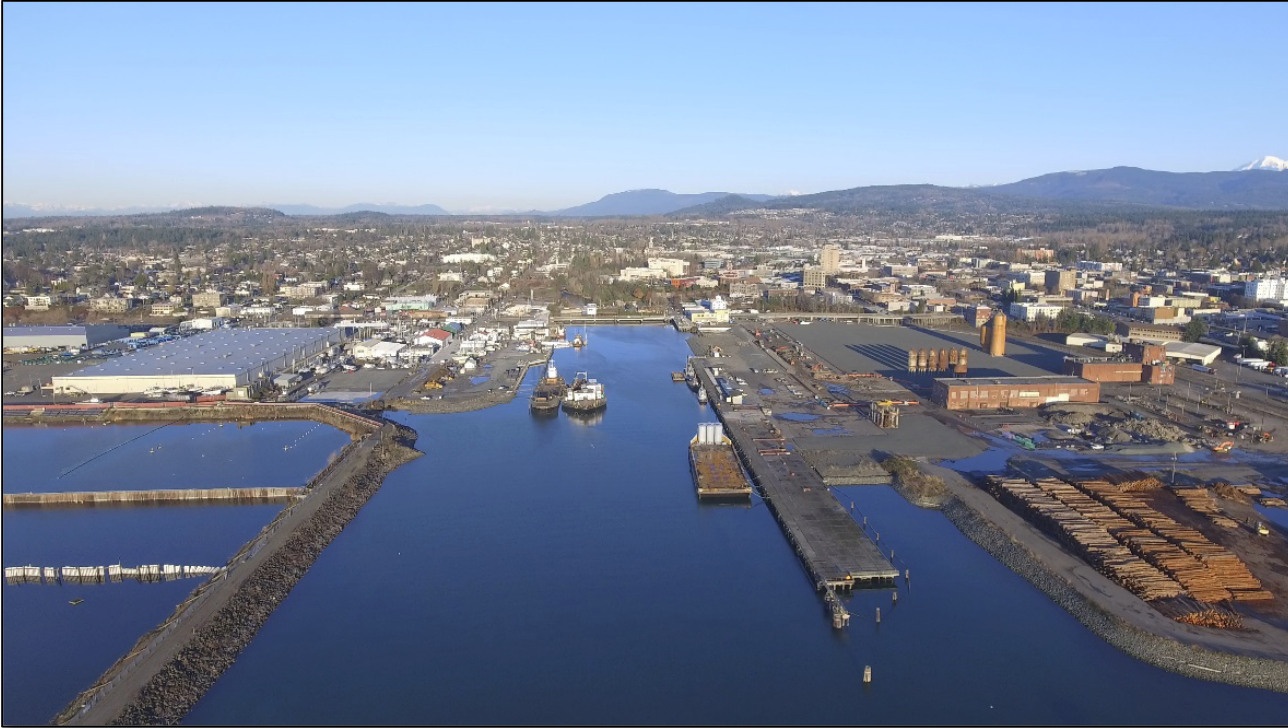 Is that all there is? Bellingham’s Attempt to Reclaim its Waterfront

In the late 60s, Peggy Lee sang a tune with an arrangement by Randy Newman called “Is that all there is?” Its sad lyrics and slow pacing express such a deep disillusionment with life that its almost a musical argument for suicide.

I was reminded of this song in looking at the current development plan for the Bellingham waterfront, as described in Salish Current by Alex Meacham. Perfectly fine, completely competent, and utterly boring. Perhaps, given the project’s long and tortured history, that’s the most that could be expected. At least, after all this time, something is being done.

Georgia Pacific operated a sprawling paper tissue production plant on the central waterfront since buying the old mill in 1963, eventually closing it at the beginning the 21st Century. After decades of dumping chemicals into the land and water, much of the property was unfit for human habitation, and still is. The current redevelopment project occupies the fraction that is relatively safe.

Though now largely gone, the collection of huge masonry buildings, oddly shaped storage tanks, and a large wastewater lagoon prominently represented the mid-20th Century urban industrial economy. And the costs: ruining a waterfront landscape that will take decades to repair.

Redevelopment of a 220-acre prime waterfront property is typically seen in large cities the likes of London, New York, Boston, San Francisco, and Toronto. Indeed, all of those places have been engaged in reclaiming similar waterfront sites created by industrial-era landfill. In the case of downtown Seattle, the new central waterfront park has to cope with demolishing the Viaduct, historically protected piers, steep cliffs, and complicated transportation infrastructure. These ambitious projects normally use the sophisticated skills of big, well-oiled public development agencies. Even then, however, those efforts are littered with setbacks, political stumbles, litigation, and misguided public sector largesse.

In Bellingham’s case, we have a contentious town of fewer than 90,000 perched on the shores of the Pacific Northwest and trying to take on the same scale of effort. Talk about “The Little Engine that Could.” Or maybe Could Not?

I had some earlier involvement in this project while working as an urban designer for a Seattle architectural firm. I recall walking into a public venue for a planning meeting that might normally attract a few dozen wonky types who follow the obscurities of zoning and public policy. Hundreds were piling in, taking up a room so large  you could barely make out people standing against the back wall. I recall saying, “Oh my, this does not portend well.” The raucous discussion that ensued bore out my worries. Same for the dozens more such meetings, which eventually grew so big that no public accommodation was large enough to hold them.

Eventually, the citizen involvement process devolved into groups that seemed to be competing for the Most Outlandish Proposal of the Year.  One group prepared detailed renderings to turn the entire site into a park — a concept fraught with major costs but no means to pay for them. Another scheme by a firm hired by the Port involved creating a dense array of 30-story glass towers identical to those seen along the waterfront in Vancouver B.C. One noisy activist group hired a firm from Colorado which swept in with a grand plan for digging Venetian-style canals slicing across the shoreline, deep into the property. When someone pointed out that the dead-end canals would confuse migrating salmon, the firm’s chief designer replied, “There could be automatic gates placed in the water to keep the fish from entering.” Much laughter ensued.

During the planning and public involvement phases there were many well-intended people. Smart, articulate mayors came, made impassioned pleas, and were subsequently booed out of office. Bright planning directors appeared on the scene, then disappeared.  Citizen groups raged on. Local architects did drawings as environmental activists shouted rallying cries. Meanwhile, beleaguered staffs of the City and the Port held tenuous and tattered threads of a plan together like a patchwork quilt.

Eventually, a detente resulted in a document that was officially adopted, and the property was advertised as available for sale. By that time, the site was saddled with so much political baggage that none of the well-established and experienced development companies in any of the three coastal states would touch it. The property was awarded to Harcourt, a development company based in Dublin, Ireland.

So, after almost 20 years and all the fuss, what is the result? A small grid of streets, dicing the land into nine blocks laced through with a greenway. A few odd remnants of the old paper mill pepper the landscape. A pleasant promenade along the water’s edge. A quirky, old building has been restored. As envisioned, the next new project will be three buildings of waterfront condos, with other housing and a hotel project expected to follow. But mostly it’s a conventional collection of midrise, rectilinear apartments, condominiums, and office buildings.

Which brings me back to the refrain of the bittersweet song sung by Peggy Lee:

Mark Hinshaw
Mark Hinshaw is a retired architect and city planner who lived in Seattle for more than 40 years. For 12 years he had a regular column on architecture for The Seattle Times and later was a frequent contributor to Crosscut. He now lives in a small hill town in Italy.
Previous article
AirBNB Down: NW Short Term Rental Market Stumbles
Next article
Why Bellingham’s Waterfront Took So Long, and Why It’s a Good Idea