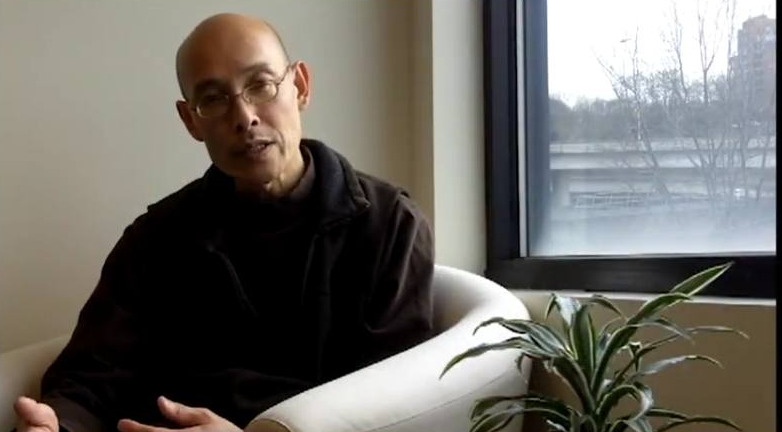 When friends urged Ron Chew to write a memoir, he had a few initial excuses. He didn’t think anyone would find it interesting. Besides, Chew, a well-known journalist and community organizer, usually wrote 800-word opinions. He wasn’t sure about writing an autobiography at book length.

But one morning while on his 5 a.m. run, he reconsidered the idea. He’d been thinking about his friend Donnie Chin, killed in an unsolved murder in 2015. He also treasured memories of Gene Viernes and Silme Domingo, the two labor activists who were gunned down at Alaska Cannery Workers Association offices. Those offices were co-located with the International Examiner where Chew worked as editor. He also thought about all the International District activists who had recently passed away: among them Bob Santos, Ruth Woo, Frank Fujii, and Al Sugiyama.

Ron came to the sudden realization that much of his world was disappearing and that he needed to tell the stories of the city he once knew, its people and places. He went to his basement and pulled out old letters, journals, and newspaper clippings and started writing. He was so used to balanced reporting that it took him some time to find his voice.

That was three years ago. Chew’s meaty memoir finally debuted last fall. As he tells it, the book started modestly and just kept growing. There were so many stories besides his own experiences — such a rich cast of characters, so many extraordinary moments.

When ready to publish, Chew approached the University of Washington Press. How long was his book? Ron said, “You don’t want to know.” It had grown to more than 600 pages. The index alone consumed 21 pages. Learning that the press would want to slim the memoir down maybe to a third that length, Chew was disheartened. That’s when the International Examiner offered to undertake publication, leaving distribution to the University press.

Chew’s book, “My Unforgotten Seattle,” (UW Press, $39.95) debuted last October. It begins more than a century ago when his paternal grandfather left a small Chinese farming village in 1911 and boarded a steamship to Seattle. Chew sketches out details of his family’s hidden past. Chinese men (women were barred) often had to invent paper relatives in order to achieve entry. The men found work, sent their earnings home, and then returned to China to marry and have a family. Wives were mostly excluded until the post-war repeal of the Chinese Exclusion Act. That was when Ron’s mother finally was able to join his father in Seattle.

Ron and his three siblings were born in Seattle, first residing in the University District where his father and uncle operated a hand laundry. By the time he reached school age the family was living on Beacon Hill, but “home” was Chinatown International District where his parents worked — his father as head waiter at the Hong Kong Restaurant, his mother holding down two jobs as a seamstress.

Some of the most affecting early chapters describe Ron’s elementary school years. Shy and not proficient in English (Chinese was spoken at home), he suffered from migraine headaches, frequent illnesses, and an undiagnosed learning disability. His mother, who had arrived without being able to read or write English, struggled with unfamiliar customs. She was terrified when the first trick-or-treaters knocked at their door. A flight of the screaming Blue Angels fighter jets filled her with panic, remembering the Japanese invasion of her Chinese homeland. Ron recalls one day when his mom, arriving to walk him from school, was accosted by an administrator. The man told Ron to tell his mom that, to enter the school, she “had to speak English.”

Ron’s memoir (extensively illustrated) covers his years as a communications student at the University of Washington.  Despite his three years as a UW Daily reporter, he was passed over, not even given an interview, for the job of news editor. After filing a discrimination suit — later resolved in his favor — he left without graduating and went to work full time at the International Examiner, an Asian American nonprofit. an Asian American nonprofit started in 1973.

In a recent interview, Ron described his career: 13 years as a journalist, 17 years leading the Wing Luke Museum and its expansion, and 10 years as director of the International Community Health Services Foundation — once more back in fundraising.

Perhaps most inspiring among Chew’s many tales is the story of how he took on the job as director of the small museum, then deeply mired in debt, and miraculously raised $23 million to build an award-winning, pan-Asian institution, transforming a historic hotel. Wing Luke Museum, named for Seattle’s first Asian City Council member, would not be a stodgy, static facility. He and his co-workers turned it into a means of preserving and activating Asian-American cultural history. One celebrated show was the wildly successful “Executive Order 9066” exhibit focused on the Japanese internment during World War II.

It was not the usual kind of history museum, since it had an additional role of bringing people and Asian cultures together. Friends told him, “Ron, remember a museum is not a community center.” Chew’s response: “Why isn’t it?”

Now that his book is published and he has retired from yet a third career, Chew is hardly at loose ends. He’s recording an audio version of the book for the Braille Library. He heads Chew Communications, a consulting firm that assists small and mid-sized museums. He confesses that, at 67, he thinks seriously of going back to writing, his first love. Maybe he’ll try a children’s book, maybe do a podcast, and he can’t help wondering if the International Examiner could use another reporter.

Jean Godden
Jean Godden wrote columns first for the Seattle Post-Intelligencer and late for the Seattle Times. In 2002, she quit to run for City Council where she served for 12 years. Since then she published a book of city stories titled “Citizen Jean.” She is now co-host of The Bridge aired on community station KMGP at 101.1 FM. You can email tips and comments to Jean at jgodden@blarg.net.
Previous article
How Game Theory Explains QAnon’s Mass Conspiracy Delusions
Next article
Running Toward Danger: Our Political Journalists as War Correspondents