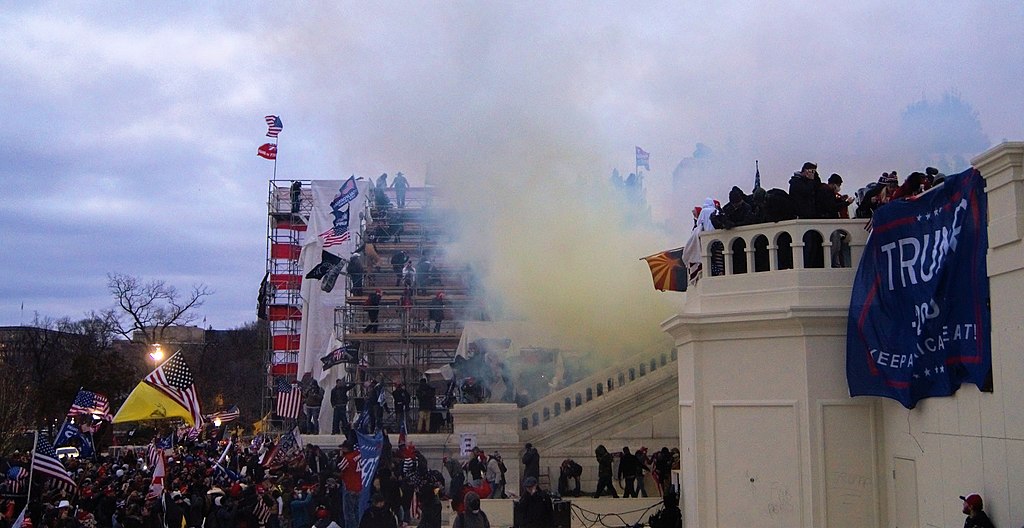 A “Christian Insurrection” at the Capitol?

We Christians have to face a hard question. Was this a “Christian” insurrection? That’s what David French, a Never-Trumper and evangelical Christian, called it in his Sunday blog, The French Press. He used that terminology in deep sadness and with anger. He went on to argue that only the church can overcome a “Christian insurrection.” But he doesn’t deny or gainsay the unavoidable Christian language and symbology of the insurrection.

“Why do I say this was a Christian insurrection? Because so very many of the protesters told us they were Christian, as loudly and clearly as they could. The Atlantic’s invaluable religion reporter, Emma Green, compiled considerable evidence of the Christian presence in her excellent report. I saw much of it with my own eyes. There was a giant wooden cross outside the Capitol. “Jesus saves” signs and other Christian signs were sprinkled through the crowd. I watched a man carry a Christian flag into an evacuated legislative chamber.”

Moreover, French points out, if the insurrectionists had been chanting Muslim slogans, Christians would have  labelled it “Islamic terrorism” and called on Muslims to speak out against it.

French goes on to speak of “enabling lies” and “activating lies,” accusing right-wing Christians and their leaders of incessantly repeating the “enabling lies” that made last week’s insurrection possible.

“What’s the difference between the two kinds of lies? The enabling lie is the lie that makes you fertile ground for the activating lie that actually motivates a person to charge a thin blue line at the Capitol or take a rifle to a pizza parlor. Here’s an enabling lie: America will end if Trump loses. That was the essence of the Flight 93 essay in 2016. That was the core of Eric Metaxas’s argument in our debates this spring and fall.

“Here’s another enabling lie: The fate of the church is at stake if Joe Biden wins. And here’s yet another: The left hates you (this sentence sometimes concludes with the phrase ‘and wants you dead.’)”

In other words, conservative Christians and their leaders, by giving credence to these broad-brush generalizations and lies, are the enablers of last week’s insurrection. And, funny thing, the Jesus the insurrectionists speak of seems to have morphed into an American Christian Nationalist. You’d be hard put to find here the Jesus of the Sermon on the Mount, or of any of the Gospels.

But the groundwork for this has been a long time in the making. One could go back to “The Moral Majority” of the ’80s or “The Christian Coalition” of the ’90s, or more broadly to the way that many professed “evangelical” churches allied themselves lock-stock-and-barrel with the Republican Party in the ’00s. More immediately relevant is the way that Trump made his appeal to right-wing and conservative, or what are commonly called “evangelical” Christians.

And here Trump’s playbook bears remarkable similarity to Hitler’s in Germany. Hitler wasn’t really a Christian, nor is Trump. But both saw the church as either a potential ally or enemy and tried to enlist it, or neutralize it. Hitler appealed to German Christians by speaking of moral ideals like patriotism, family, motherhood, and a society of virtue and “manliness,” and against things like abortion, gays and “promiscuity.” He promised that German Christians would find their privileged place in society restored (think, “you’ll be able to say Merry Christmas’ again,” etc.)

Very soon after coming to power, Hitler reached a “concordat” with the Catholic Church in Germany promising “religious freedom” to the church so long as it said nothing about his politics or policies. Hitler went after the Catholics first because the Pope looked like competition. The Protestants came later.

Like tyrants in all times and places, Hitler recognized the value of established religious language and symbols for giving legitimacy to his political agenda. Trump did exactly the same.

The result? “A Christian Insurrection.” The challenge? Here’s David French on that:

“Rebutting enabling lies does not mean whitewashing the opposition. It does not mean surrendering your values or failing to resist destructive ideas. It does mean discerning the difference between a problem and a crisis, between an aberration and an example. And it means possessing the humility to admit when you’re wrong. It means understanding that no emergency is ever too great to stop loving your enemies and blessing those who persecute you.

“And the rebuttal has to come from within. The New York Times isn’t going to break this fever. Vox won’t change many right-wing minds. But courageous Christians who love Christ and His church have a chance.”

Anthony B. Robinsonhttps://www.anthonybrobinson.com/
Tony is a writer, teacher, speaker and ordained minister (United Church of Christ). He served as Senior Minister of Seattle’s Plymouth Congregational Church for fourteen years. His newest book is Useful Wisdom: Letters to Young (and not so young) Ministers. He divides his time between Seattle and a cabin in Wallowa County of northeastern Oregon. If you’d like to know more or receive his regular blogs in your email, go to his site listed above to sign-up.
Previous article
“Drive-By Chalking”: The Sheep and Jackasses of Ferry County
Next article
Guardrails Down, What to do With Trump’s Militia Legacies?