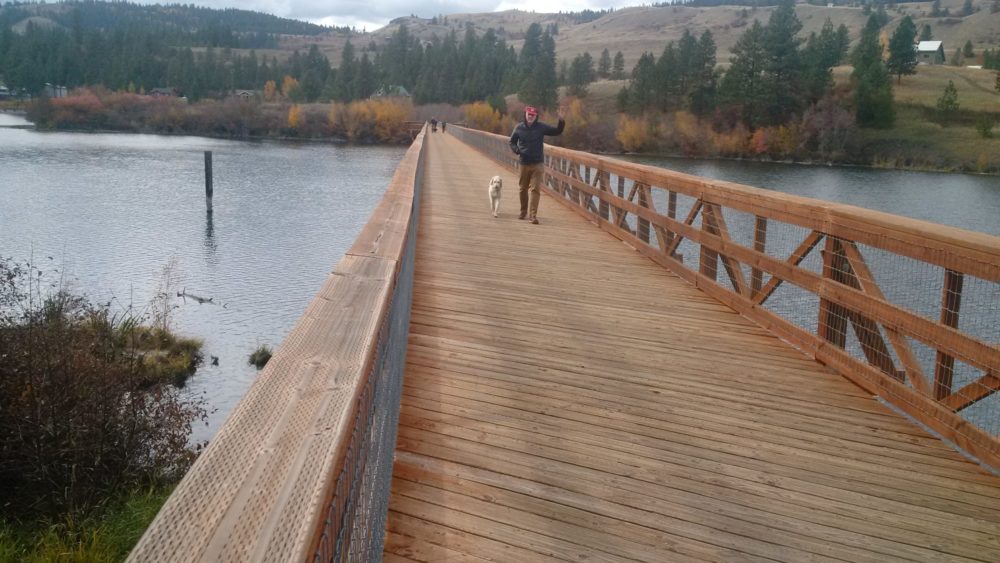 “Drive-By Chalking”: The Sheep and Jackasses of Ferry County

Ferry County, in north-central Washington, has entered the news as home to spectacularly unsuccessful GOP gubernatorial candidate Loren Culp, a local rancher who wants wolves killed, and – on the bright side – the wonderful Ferry County Rail Trail.

The trail follows a gorgeous, meandering and serene Kettle River, but Ferry County Commissioners have had a not-so-serene reaction to a hiking-and- biking trail in their backyards. Hence, a series of events leading Tuesday to a $165,000 free speech settlement. “Remarkable this all started from a rail trail dustup,” observed local resident Bobby Whittaker.

The commissioners wanted motor bikes on the trail, which follows an old railroad bed.  Crusty Commissioner Michael Blankenship described as “sheep” and “jackasses” advocates of a walking, jogging, and pedaling trail. In response, just before a public meeting, trail advocate Janina Bledsoe wrote in chalk outside the commissioners’ offices, “You are not sheep. You are not jackasses.”  She meant to encourage people taking their case to local elected officials.

Instead, a commission employee called the cops.  Bledsoe was charged with malicious mischief.  According to court documents, Blankenship believed that Bledsoe should serve a full year in jail and a $5,000 fine for “drive-by chalking.” Ferry County District Court Judge Tom Brown dismissed the charge, saying there had been no damage to any property, and wrote: “Nor could there be – the defendant scrawled on a paved surface with a child’s colored chalk.  On the packaging of the chalk it says, ‘temporary,’ meaning ‘not permanent.’ The stuff washes away. Was it tacky for her to do so? Yes. Criminal? No.”

Janina Bledsoe decided to challenge the power of wool hat commissioners.  She filed suit in U.S. District Court in Spokane, charging “malicious prosecution” and violation of her civil rights. She won a $165,000 settlement.  “I think the chalk is fairly well benign compared to some other things that are First Amendment protected,” she told the Spokane Spokesman Review.  “It feels good that the federal court stepped in and told the board of county commissioners, you all need to correct yourselves.”

Two county commissioners named in the suit, Blankenship and Johanna Exner, did not seek reelection last year. In a deposition, Blankenship said commissioners called the cops on Bledsoe because the commission office was worried about “escalation” and potential danger to county employees.

In words of Bobby Whittaker, “Chalkgate!!! Hats off to Janina for her efforts here. Power to the people & long live the Kettle River Rail Trail.”

Along with nearby Kettle Range hikes, the trail along the river is being discovered by those who want to get away from overcrowded trails further west along the North Cascades Highway.  The rail trail boasts, among its attractions, two still-private skinny-dipping holes just north of an old railroad tunnel.

Joel Connelly
I worked for Seattle Post-Intelligencer from 1973 until it ceased print publication in 2009, and SeattlePI.com from 2009 to 6/30/2020. During that time, I wrote about 9 presidential races, 11 Canadian and British Columbia elections‎, four doomed WPPSS nuclear plants, six Washington wilderness battles, creation of two national Monuments (Hanford Reach and San Juan Islands), a 104 million acre Alaska Lands Act, plus the Columbia Gorge National Scenic Area.
Previous article
Apartment Rents Continue to Fall Across Seattle
Next article
A “Christian Insurrection” at the Capitol?