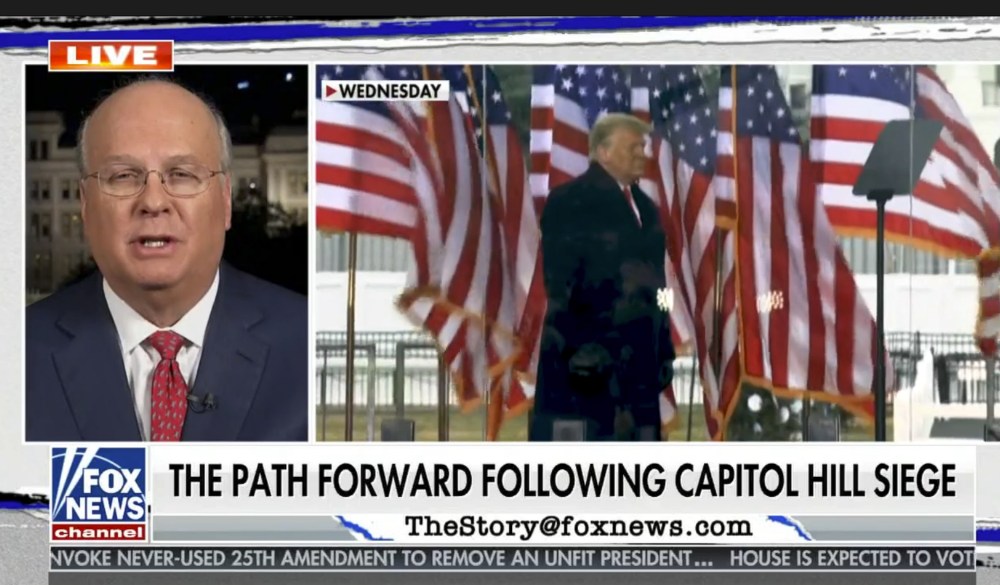 Fox News’ Awkward, Twisting Evolution in talking About the Insurrection

If last Wednesday’s events at the U.S. Capitol weren’t surreal enough for you, you could always check out Fox News’ version of them—in particular its editors’ and commentators’ struggles over what to call them. Then, as reality bit and the terminology changed over the coming days, you could track the emerging acknowledgment at the network (and the Right generally) as to just what happened at the Capitol, and who instigated it.

The day of the assault on the Capitol, Fox described it as a “protest” and its participants as “pro-Trump demonstrators.” Other terms terms were missing from its lexicon: “occupation,” “assault,” “insurrection,” “putsch,” “coup,” even “riot.” Not to mention “instigation.” (A conspicuous exception was Republican Senator Ben Sasse’s clarifying statement, reported on Foxnews.com: “This violence was the inevitable and ugly outcome of the President’s addiction to constantly stoking division”)

Foxnews.com slugged its day-of-riot reports with a deliciously ambiguous über-hed: “Democracy Undeterred.” Did that refer to Congress’s resuming certifying the election results after the attack was repulsed, or to the stalwart “protesters”? Apparently the latter, since it appeared before Congress reconvened.

Trump was either absent from the picture or another victim. House Minority Leader Kevin McCarthy, interviewed by Fox, deplored the “unacceptable” and “un-American” violence in the tones of a say-nothing editorial writer but didn’t mention you-know-who. Commentator Deroy Murdock fearlessly stood up—for the aggrieved president: “Attack on Capitol by un-American anarchists is a terrorist act and disservice to Trump”-–“anarchists” being code for the dreaded antifa, whom others on Fox and other right wing media have claimed were false-flaggers leading the attacks.

Tucker Carlson, one of Fox’s biggest guns, did muster some exclamation-pointed outrage—not at the invasion of the Capitol but over the woman who was shot “with no warning” as she and others tried to break down doors inside it. His peroration that evening was a bizarre, contorted version of Marc Antony’s funeral speech in Julius Caesar. It started out jerking tears and wound up fanning the flames.

“She appears to be in her 20s,” Carlson intoned [she was 35] and “looked pretty much like anyone else”–white, blond, tanned. “She did not look particularly radical. She bore no resemblance to the angry children we have seen again and again wrecking our cities, pasty entitled nihilists dressed in black setting fires.” Shot, she stares into the camera and “knows she’s about to die…. Imagine it were your daughter. Imagine getting a call telling you she is dead. The last time you talked to her she was heading to Washington for a political rally. You’ll never talk to her again.” A martyr is made.

And “consider why the woman shown in the video went to the rally in first place. Why was she there on a Wednesday? Why were any of them there?”

After some disingenuous blather about how the “two hemispheres of America” are “cojoined twins” who have to get along even though they “have nothing in common,” Carlson answers his rhetorical question. “Citizens are storming the Capitol building” because they “sincerely believe the election was fake,” and “self-interested demagogues” (Black Lives Matter apologists, not Trump, whom Carlson never refers to) and the incoming “illegitimate leadership” aren’t even trying “to change their minds, to reassure them and convince them democracy is real and the system works.” Instead, “what happened today will be used by the people taking power to take away the rights you’re born with as an American. Your right to speak, your right to assemble, to not be spied upon, to make a living, to defend your family most critically. These are the most basic and ancient freedoms we have, it’s why we live here, why we’re proud to be Americans, they’re what make us different and they’re all now in peril!” To the barricades!

Three days after the attack, the Washington Post offered a closer look at Ashli Babbitt, the woman shot, and an answer to Carlson’s “Why was she there?” It traced a familiar trail of conflicts and disappointments on the way to political radicalization: an Air Force career that fizzled out, crippling debt, a struggling pool-cleaning business, protection orders against her after she stalked her ex-husband’s new wife. Frantically outspoken and short-fused, she found “a cause that gave her life purpose” in Donald Trump, QAnon conspiracy fantasies, fury at mask mandates and highhanded officials, and the myth of a stolen election. She came to Washington to join in the QAnon-touted “storm” that would take back America. “She was an avid viewer of Fox News, praising Tucker Carlson and other far-right media personalities on the network as she derided their liberal targets.”

On Thursday, Fox’s lexicon started to expand beyond “protest”—thanks not to its hosts but to prominent Republicans who didn’t mince their words so closely. Fox.com could safely quote ex-attorney general William Barr saying Trump’s “orchestrating a mob to pressure Congress is inexcusable” and “a betrayal of his office and supporters.” It even referred to “the president’s baseless claims of election fraud” and the “violent mob of his supporters.” And it used the unvarnished term “retaliation” to describe the withdrawal of a full appointment for acting Homeland Security director Chad Wolf after he urged Trump to denounce the “unconscionable” riot.

On Saturday The New York Times’ Michael M. Grynbaum detailed other “cracks in the firmament” binding Fox to Trump. As he sinks, Fox is unhitching from him and positioning to replace him as the tribune of the people—a voice for the white working and middle classes scorned by the Republican elite and under assault by cancel culture, supposed Bidenite socialism, and the “unchecked power” of the Democrats.

Tucker Carlson sounded the call on Thursday: Trump’s “expiration date” comes on January 20, when we can escape this “sweaty, airless chat room of 330 million people, all of whom are simultaneously focused with monomaniacal intensity on a single man.” Forget Trump and focus on Fox: “Who’s got your concerns top of mind? Who wakes up in the middle of the night worried about your family?” We do!

Since then “riot” and “mob” have become frequent Fox terms for what happened Wednesday—less than an insurrection but more than a protest. And still entirely understandable given the tyrannical forces Tucker and Friends are here to protect us from.

Coda: the Defense Department has also been squeamish about labeling last Wednesday’s riot/insurrection. A “memorandum for the record” from the Secretary of Defense’s office details the National Guard’s response to “the January 6, 2021 First Amendment Protests in Washington, D.C.” Perhaps that’s just reflexive bureaucratese. But it came just as outgoing Capitol Police Chief Steven Sund, who’s starting to look like a fall guy for others’ failures, recounted how military brass rebuffed his pleas to send in the Guard.

Eric Scigliano
Eric Scigliano has written on varied environmental, cultural and political subjects for many local and national publications. His books include Puget Sound: Sea Between the Mountains, Love War and Circuses (Seeing the Elephant), Michelangelo’s Mountain, Flotsametrics and the Floating World (with Curtis Ebbesmeyer), The Wild Edge, and, newly published, The Big Thaw: Ancient Carbon and a Race to Save the Planet.
Previous article
Politics, COVID-style, Means Radical Transparency for Olympia Lawmakers
Next article
Four Steps to Healing America after Trump