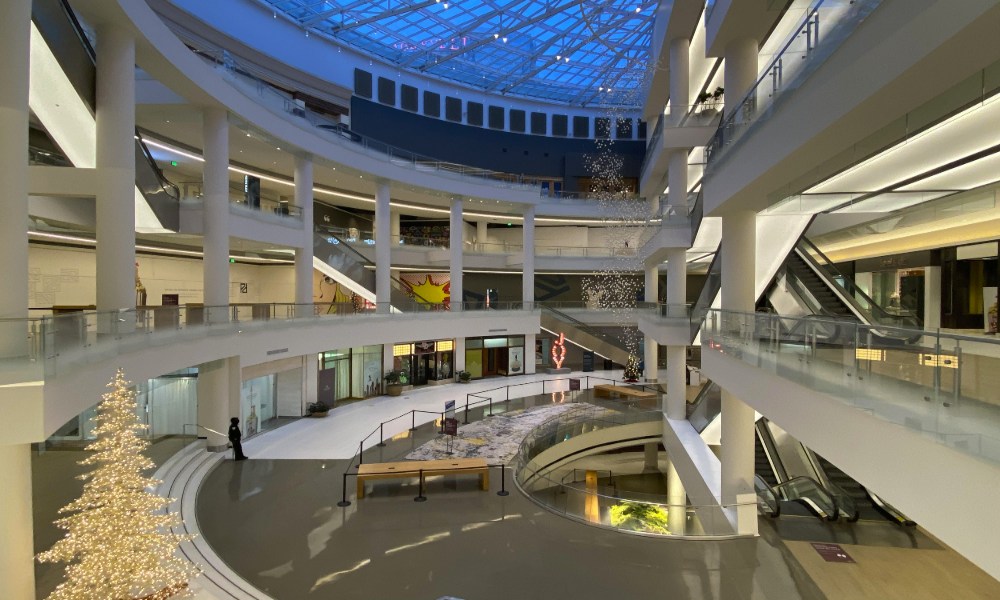 A Remade Pacific Place: Mall for a Market that stayed Home

While the city works and shops at home, remodeled Pacific Place in downtown Seattle waits for customers. And stores. D.C.-based owner Madison Marquette, “a capital guidance company,” is completing an extensive renovation designed by CallisonRTKL.

As of last fall the 22-year-old urban mall had been cleaned up and greened up, with dated details whited out. Already flooded with natural light from above, it had opened a selfie-worthy northeast entrance and grand stair at Olive Street and Seventh Avenue, which brings in even more light. New columns of rich green-wall plantings anchor two sides of the atrium, right next to elevator banks. All in all, it’s reminiscent of the fashionable-again atrium hotels like the ones designed by John Portman in Atlanta and San Francisco.

Changes along Pine Street are still being finished. The owner (who could not be reached for this article) opened before Christmas while continuing to pursue tenants in a retail-challenged time.  Pacific Place now invites “pop-in” retailers to set up and test storefronts for as little as a day. So far, it does not seem to be working. The mall has never looked better. But it’s practically empty.

So much for the long-awaited rollout.  Pacific Place has been closed to shoppers for almost three years during the extensive remodel. The redesign is clearly pitched to the newest population of downtown Seattle, the tech workers of South Lake Union. But where are the Amazonians? They’re not streaming into urban malls like Pacific Place and Westlake Center.

It’s not the first crisis for Seattle’s retail center along Pine Street. When it was designed by NBBJ and built in the late 1990s, Pacific Place was a response to retail alarm bells.  The growing highway system was still feeding suburbs and suburban malls. The new Westlake Park and Westlake Center were opened, but long-standing downtown department stores like Nordstrom and Frederick & Nelson and I. Magnin were sending distress signals and demanding that Pine Street, closed for traffic as part of the Westlake master development, be reopened to cars in order to better compete with malls.

Their signals were heard, and the city of Seattle responded under Mayor Norm Rice by supporting a grand bargain that would put the flagship Nordstrom store in a remodeled Frederick & Nelson building, repurpose the old Nordstrom buildings, and pave the way for Pacific Place and its new parking garage. Pine Street was reopened to traffic. The huge investment “saved” downtown and allowed Seattle’s retail center to hold on for a few more decades.

But the project was also dogged by controversy at the beginning. A 1998 article in Seattle Weekly revealed a key connection between the developer of Pacific Place, Jeff Rhodes, and the low-interest loan from the state housing finance commission that built the garage. Housing money and other city incentives had served private businesses, stirring civic watchdogs.

Nor was this expensive makeover a lasting fix. In the next two decades, Amazon transformed consumer behavior and challenged brick-and-mortar retail around the globe. Eventually the old Bon Marche/Macy’s store closed and rented its upper floors to, ahem, Amazon. Now the historic department store is part of the new retail giant’s portfolio. In the meantime our homegrown e-commerce giant made history as the largest company to make its home in urban Seattle, or in any city for that matter. It quietly settled down blocks from Pacific Place, creating the Spheres (NBBJ, 2018) a suitably urban and green landmark. Seattle did not exactly shower the company with gratitude.

Amazon and online retail are not the sole causes of retail’s apocalypse. Many other economic and political factors, including poverty and homelessness, have played a part. Then came the 2020 pandemic.

Now, in 2021, there are returning signs of life downtown. The boarded-up windows of the old Frederick & Nelson department store (now Seattle’s flagship Nordstrom), no longer display plywood. Private security walks the streets, and some shoppers are returning to Nordstrom. Plans are afoot for the conversion of Macy’s ground-level spaces.

The future of Pacific Place seems less certain, and more tied to the fate of overbuilt retail. Might there be some other ways to rejuvenate the building? Empty Pacific Place might be the perfect place to ease Seattle’s transition into the post-pandemic age—and help to save downtown Seattle once again.

Amazon might purchase the building and repurpose it as a true atrium hotel for employees, and use some of the lower level as a fulfillment center. The ground floor might be a place for boutiques and showrooms, Nordstrom style.  With enhanced mechanical systems, the two middle floors could be partly filled with worker-friendly services like salons, spas, gyms, and other aspects of “experience retail.” The top floor, now home to a multiplex movie theater, might also offer flexible research or office space, with restaurants.

It will take years to find a new equilibrium in cities like Seattle and for the shoppers and workers and tourists to return. In the meantime, flexible space awaits.

Clair Enlow
Clair Enlow is a freelance journalist writing about architecture, planning and history. She’s a Loeb Fellow and an honorary member of AIASeattle.
Previous article
Redrawing Washington: Redistricting is About to Commence
Next article
Open Letter to Mayor Durkan: Don’t Let a Lovely Tribute Park Get Trashed