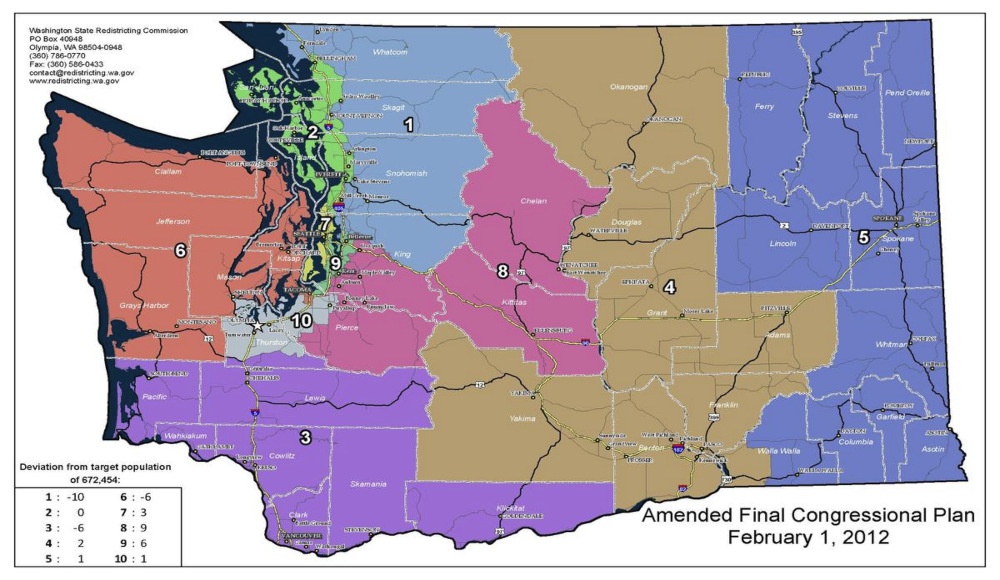 Redrawing Washington: Redistricting is About to Commence

The late San Francisco Congressman Phil Burton, who oversaw redistricting in California, towered over nervous House incumbents and reassured them with the promise:  “Baby, you’re in your mother’s arms.”

Even with the advent of computers as architects of district boundaries, Burton kept control of the process, which is required every 10 years, after Census figures come out. Phil’s strategy: Take care of incumbents, offer safe seats to Republican colleagues, while drawing other boundaries to maximize Democrats’ prospects for victory. He described the Golden State’s 1970s electoral boundaries as “my contribution to modern art.” (Nancy Pelosi now holds Burton’s old seat in Congress.)

Until recently, Washington had such a redistricting master.  Starting with the 1970 Census, Slade Gorton was backstage or centerstage every time that lines were drawn.  His knowledge of district boundaries rivaled Billy Graham’s of the Bible.  Gorton was a Republican member of the state’s post-2010 redistricting commission.

One question for Republicans as we approach the next drawing of congressional and legislative district boundaries:  How do they consult Gorton now that Slade is no longer with us?  The former U.S. Senator helped take Democrats to the cleaners in 2011.

Our state’s redistricting system was drawn up supposedly to take politics out of the process.  A bipartisan commission was created in 1983, after Republican state legislators had tried to split Spokane between two U.S. House districts. The goal was to defeat Democratic U.S. Rep. Tom Foley.  Our state’s last Republican governor, John Spellman, nixed that scheme.

The Washington State Redistricting Commission holds four voting members, two Democrats and a pair of Republicans, chosen by their party caucuses in each chamber of the Legislature.  The voting members then pick a fifth, nonvoting chair.  The commission has until Nov. 15 to draw new boundaries for U.S. House and state legislative districts. The law requires that at least three of the four voting commissioners agree on the map.  The Legislature has very limited powers to tinker. Districts are required to be equal in population.  Splitting up cities, as the GOP proposed with the Lilac City in the early 1980s, is frowned upon, as is racial gerrymandering.

Of course, politics is very much part of the process. Witness what happened a decade ago. Democrats put their cards on the table in 2011.  They wanted to create a minority-majority seat in Congress.  The state was getting a new U.S. House district, and the Dems wanted a “Denny district,”  tailored to fit longtime Olympia insider Denny Heck, who had lost a House bid to 3rd District Rep. Jaime Herrera Beutler in 2010.

Critics of redistricting have long pointed out that Republicans’ in the American South have packed minority voters into a few selected districts, giving the GOP broad control of the remaining congressional seats in the old Confederacy.  The critics were maligned as racially insensitive by left activists, and hence silenced.

The “Denny District,” our 10th CD, was created in the south Sound, and Heck was promptly elected to Congress. After four terms in Congress, Heck retired (ultimately to get elected as lieutenant governor), being replaced by moderate Democrat Rep. Marilyn Strickland. The 9th District, stretching from Tacoma to south Seattle and represented by U.S. Rep. Adam Smith, was expanded to include much of Southeast Seattle, and now is minority/majority.  Smith has made adjustments leftward – he is a member of the Congressional Progressive Caucus – and has survived to chair the House Armed Services Committee.

The Republicans extracted a high price. By carving off liberal precincts in Olympia, the 3rd CD went from a classic “swing” district to a Republican political domain, and Herrera Beutler has turned back significant Democratic challenges in 2018 and 2020.  The 8th CD, the former turf of GOP Rep. Dave Reichert, was extended across the Cascades to include Kittitas, Chelan, and a chunk of Douglas counties – Republican territory.  After a succession of tough races, Reichert was given three reelections in which he didn’t have to work very hard.  Dave liked that.

The Republicans were also able to adjust legislative district boundaries, across Western Washington, to their advantage.  The 42nd District was drawn to have fewer precincts from liberal Bellingham.  The 10th District, on Whidbey and Camano Islands, extended deeper into Republican-leaning rural Snohomish County.  In Southwest Washington, a chunk of very conservative Lewis County was put into the historically Democratic 19th District.

The results:  The 19th District has gone from an all-Democratic to all-Republican delegation, a factor of redistricting but also of Gov. Jay Inslee’s ignoring the state’s “rust belt.”  State Sen. Mary Margaret Haugen, D-10, lost her seat in 2012.  State Trump campaign chair Sen. Doug Ericksen, R-Ferndale, has hung on in the 42nd (in 2018 by a 45-vote margin).

Even with such wily drawing of new lines, change is inevitable.  The angry reaction to President Trump put 700 demonstrators outside Dave Reichert’s Issaquah office. Sheriff Dave decided to retire from Congress, although he continued his familiar tease by hinting at a run for Governor in interviews with Natalie Brand of KING-TV.  With heavy King County support, Democrat Kim Schrier captured the 8th District in 2018 and narrowly held it in 2020.

The 10th District has continued to send two Republicans to Olympia.  Up north, however, Whatcom County has moved slightly to the left.  Democrats hold its two 42nd District state House seats, and they are expected to go after the Ericksen seat next year.

Which brings us to 2021.  Washington has picked up three seats in Congress since 1980 but is expected to stand pat this year.  The question arises:  Who is “in your mother’s arms” and who is not? Republicans have yet to name their commissioners.  Democrats have appointed April Sims, secretary treasurer of the Washington State Labor Council, and Brady Walkinshaw, ex-legislator, ex-Congressional candidate, and CEO of Grist, a popular environmental news site.

All of this sounds like what U.S. Rep. Norm Dicks used to call “inside football.” Citizens can, however, break in.  The 2001 redistricting commission, under legislative staffer Ethan Moreno, made a conscious effort to reach out.  It crafted for public involvement an amusing short film.  Its central character, was Eldridge Gerry, fifth vice president of the United States and architect of the practice known as gerrymandering.  Gerry was an 18th Century version of Phil Burton.

The 2021 commission will face calls by the Yakama and Colville Indian nations that their tribal territories no longer be divided between legislative districts.  A decade ago, a “dent” in its borders, expanding the 14th District, effectively thwarted prospects of electing a Latino legislator in the Yakima-centered next door 15th District.

Other states still have partisan gerrymanders, such as U.S. House districts drawn by Republicans in Ohio, Michigan, and Texas.  By ordering that boundaries in Pennsylvania and North Carolina be redrawn, courts helped save Democrats’ majority in the U.S. House of Representatives.

Computers will remain in charge, but they are unlikely to approach the level of knowledge once found in the heads of Phil Burton and Slade Gorton.