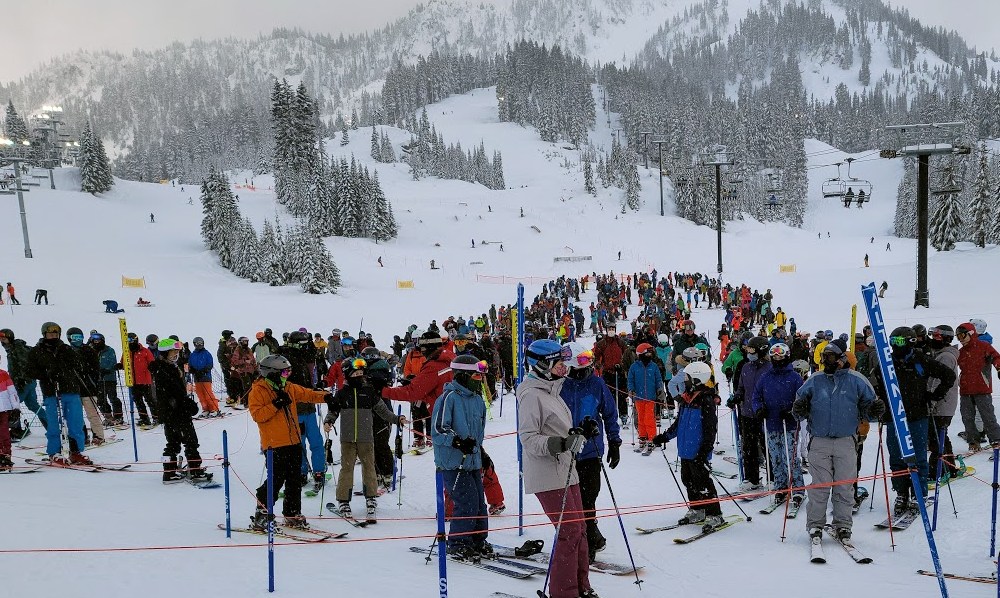 Let’s stipulate up front that operating a ski resort is a tough business.  Success is at the mercy of the weather. And now COVID. Last March when the state pandemic lockdown was imposed in the final few weeks of the ski season, there were news reports of resorts scrambling to limit skiers on the mountains and of new reservations systems designed to control the size of the crowds. But most resorts ultimately gave up and closed early for the season.

Over the summer, Vail Resorts, the mega-ski-resort operator that owns 37 resorts and bought the Steven’s Pass ski area a few years ago, made a big deal about how they were going to manage crowds this year and control access to the mountain through reservations. So I signed up for a ski pass and made a reservation for Tuesday the 22nd, a few days before Christmas.

You might expect that “controlling access” might mean fewer people on the mountain, given the pandemic. But by a little after 9AM, the parking lots were almost completely full and the overflow lots were filling up. Worse, outside the lodge there were hundreds of skiers milling around, a line of about 50 to pick up passes, and already lines with hundreds of skiers waiting at the chair lifts. Instead of fewer skiers, as one might have assumed, given Vail’s assurances of safety, this appeared to be a larger crowd than on a typical weekday in years past. Skiers waited in packed lines at least an hour (see picture above) to go up the mountain. Little social distancing was evident.

So what is the regular capacity of Stevens, and by how much has it been reduced? That’s a more difficult question to answer than you’d think. And it’s probably the wrong question, as it turns out. Vail declines to give capacity numbers, and besides, while Gov. Jay Inslee has put limits on the size of most gatherings in the state, including recreational sports, there are no capacity restrictions on ski resorts like in some other states. (Some counties in Colorado, for example have limited capacity at ski areas to 25 percent.) Instead, there are requirements for masks, distancing, and not loading strangers together on chair lifts. All of which, oddly enough, may be making things worse, not better.

Theoretically, skiing ought to be relatively low risk for COVID transmission. Skiers wear goggles and masks, and on the slopes they are away from other skiers. The trick then is limiting bottlenecks at the parking lots, lodge, and at the bottom of lifts.

Vail Resorts spokesperson Jennifer Smith says Stevens is committed to keeping people safe. So why were the parking lots filled to overflowing? Smith says, “where we once could encourage carpooling and the use of shuttles to maximize on space, we must now encourage people to come only with their households. Single occupancy vehicles are common, as our guests do their part to physically distance, and this does mean a significant reduction in what a full parking lot means in terms of overall guests.” In other words, there are more vehicles and fuller lots because skiers aren’t sharing cars or taking shuttles.

Likewise, lifts this year have longer lines because of state restrictions. Where in the past every chair going up the mountain was loaded to capacity during busy times, this year restrictions prohibit loading skiers not from the same household on a chair: “You will likely see long lines on big powder days this year because of the way we are loading the lifts,” says Smith. “Physical distancing practices mean only one or two people may be on a chair and the line itself is spread out as we work to keep guests 6 feet apart—about the length of their skis.”

Smith also said there have been mechanical problems recently, including ice and power outages. Even though the mountain opens at 9AM, on the 22nd, one of the main lifts didn’t get going until a few hours later, resulting in epic lines. Perhaps the 22nd was just an anomaly, but there are plenty of complaints on the Stevens Pass Facebook Page and Twitter accounts about lifts frequently failing to start when the mountain opens. Additionally, when the back side of the mountain is not open, the backups are compounded.

While Stevens does have signs everywhere urging masking and distancing, there appears to be little enforcement, and skiers won’t lose their passes if they’re caught not complying. And while once you have your ski pass in hand you don’t have to have contact, picking up your pass for the first time in the season can require long waits in line, where, despite marks on the sidewalk, few are observing distancing. Staff on the 22nd looked harried and unhappy, some grumbling about a lack of help to control the crowds.

So growing pains — all this is new, and perhaps it takes a while to make it go smoothly. Clearly trying to put a system in place to keep people safe and distanced is a work in progress.

But there’s little transparency. Stevens’ social media update feeds, which Smith says are supposed to keep skiers up to date with conditions are lame at best, failing to update much in real time. On the 22nd there was nothing in the feeds about parking until lots were full, nothing updating about chairs not running or why, and little explanation for or attempts to deal with the massive crowds.

And what about transparency about controlling the numbers on the mountain? The company reported in December that sales of passes across its resorts were up 20 percent over last season, suggesting that there may be significantly more skiers on the mountain rather than fewer.

It all adds up to more skiers being processed slower, resulting in longer lines, closer quarters and increased opportunity of exposure while Vail hides behind regulations that suggest they’ll keep people separated and safe but are ineffective without capacity limits. Smith says that “guest and employee safety is our top priority every day. We are 100% focused on adapting our operation to protect our community this year,” and clearly Vail is trying to comply with the letter of the law.

But Stevens’ lack of transparency about numbers on the mountain, its anemic social media, lack of sufficient staffing to handle crowds, and indifference to minimizing congestion makes for not only a significantly less pleasant experience but a potentially dangerous one as well. Smith says that the “number of people on hill is not a set figure. It fluctuates daily. Once we account for the speed of the lifts, terrain opening, storm systems, parking space and so forth, we set reservation inventory. No two days are the same.” That sounds reasonable, except that many of those factors can’t be known until the day-of, long after most have made their reservations to come. And it doesn’t explain the lack of real-time communication that might help mitigate crowding.

More important, the goal ought not to be merely following the letter of the regulations but making sure crowds don’t accumulate, which is clearly the intention of the rules. Clearly that was not the case on the 22nd.

After standing in lines for an hour and seeing hundreds queued for the lifts, we decided to abandon the day and leave for the 90-minute drive back to the city. On the way back to the car, there were dozens of empty spaces in what had been a full lot. Evidently many others had made the same decision.

Douglas McLennanhttps://www.artsjournal.com
Doug is a longtime arts journalist, and the founder and editor of ArtsJournal.com, he's frequent keynoter on arts and digital issues, and works with a number of arts organizations nationally.
Previous article
The League of Cannibalistic Satanist Pedophiles Has a PR Problem
Next article
Manifesto: A Vision for a Renewed Seattle