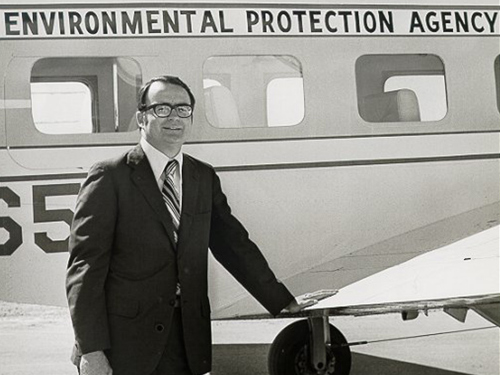 You would think that Georgia’s Republican secretary of state, Brad Raffensperger, who sensationally and very publicly defied President Trump’s pleas to “find” enough votes to shift Georgia’s electoral victory to Trump, would be a hot political property. He has become a national figure by his firm stance for Georgia voters and the independence of the secretary of state.

And you would be wrong. Defying a president of one’s own party is not a ticket to higher office, but rather a one-way ticket to political oblivion.

My evidence for this observation is a story I once was told by Bill Ruckelshaus. Ruckelshaus came from a distinguished political family in Indiana, and Bill had joined the family law firm and was such a hot political property that he was named Indiana House majority leader in his first and only term in the Indiana legislature. He was a leading Republican moderate, deeply rooted in Indianapolis.

His problem was finding an important race he could win, particularly as the state drifted to the right. Prior to his Watergate fame, Ruckelshaus had run for Congress in 1964, losing to the conservative Republican in the primary; and the U.S. Senate in 1966, narrowly losing to Birch Bayh, the incumbent.

Not surprising, then, that Ruckelshaus after his Watergate and Environmental Protection Agency heroics, figured he could return to Indiana, where he had a stellar reputation, and run for the Senate or other high office. He made the rounds, seeking support.

He was, as he told me, in for a rude surprise. Even though Nixon had resigned in disgrace, Ruckelshaus’s reputation with fellow Republicans was badly debased by his defiance of a sitting president in one’s party. Sorry, the party leaders said as Ruckelshaus explored a run for higher office, what you did was unforgiveable.

The national hero was a party pariah. Shortly after, he gave up on Indiana politics and moved to Tacoma to become senior vice president at Weyerhaeuser. (The other lesson he said he learned by this effort to gain support was that nothing mattered more in Indiana politics than playing on a basketball team in the state high school championships.)

There was to be one interesting near-miss. In 1976, President Gerald Ford placed Ruckelshaus high on his list of vice presidential candidates, presumably because the hero of Watergate would go a long way to counter Ford’s pardon of Richard Nixon. No cigar, again, as Ford picked the uninspiring Bob Dole and went on to lose to Jimmy Carter.

Even so, Ruckelshaus went on to be a revered figure in Seattle and the nation, dying in November 2019. He illustrates three rules of modern politics. There’s not much future for liberal Republicans. Toppling a president in your own party is a bad career move. And it’s quite possible, though uncommon, to “fail-up.”

David Brewster
David Brewster, a founding member of Post Alley, has a long career in publishing, having founded Seattle Weekly, Sasquatch Books, and Crosscut.com. His civic ventures have been Town Hall Seattle and FolioSeattle.
Previous article
The Psychology of Losing: Why Republicans Cry Foul Over Election
Next article
The League of Cannibalistic Satanist Pedophiles Has a PR Problem