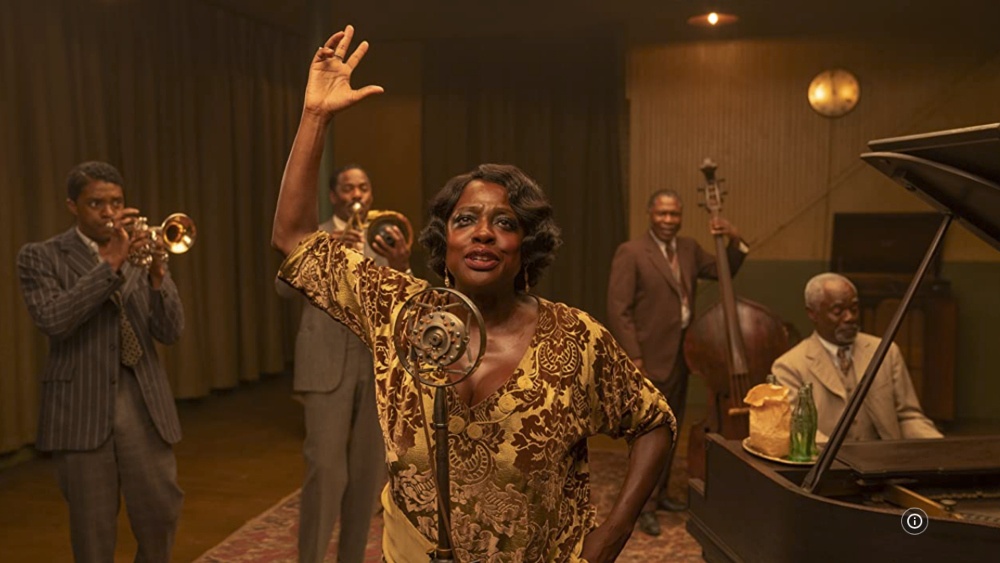 ‘Ma Rainey’ and the Playwright’s Artistic Journey: Learning to be Black

The plays of August Wilson (1945 – 2005) have been treated as prestige product from the very beginning of his career: carefully work-shopped, meticulously produced, vigorously promoted. And the results have been reverently reviewed.

It’s been business as usual with his latest work to be adapted for the screen: George C. Wolfe’s glossy and lavish version of Ma Rainey’s Black Bottom, now streaming on Netflix. This is no routine movie-of-the-week, says every shot and scene: this is Art.

So solemn and respectful has been the reception of the film that a newcomer to Wilson’s work may be puzzled by the adulation. The lead performers—Viola Davis as the imperious real-live “mother of the Blues” (1886-1939) and the late Chadwick Boseman as an imaginary member of her back-up band—are almost too larger-than-life but definitely memorable.

The play itself, though, which was Wilson’s first to be professionally produced, is clearly journeyman work: rickety in construction, poorly paced and lacking in dramatic tension until its implausible bloody dénouement. Yet at its arrival on Broadway in 1984 (when its unknown author was pushing 40), it was instantly hailed as the debut of a master dramatist. Why?

The reasons have little to do with the intrinsic merits of the play and a whole lot to do with the state of the American theater business at the time. After several decades in the background, race was again an unavoidable part of the public discourse. And in the cosy world of theater, Black voices were at last speaking for themselves and their condition.

The problem was that these voices were strident,” “confrontational,” “filled with hate.” It was one thing to read an essay by James Baldwin excoriating the deliberate blindness and doublethink of White America and nod sadly and pass on. It was something else to sit in a small off-Broadway theater and have LeRoi Jones’ furious Dutchman (1965) go off in your face like a shrapnel grenade. Can’t we look at these issues in a spirit of moderation and good-will?

Jones’ answer was a profanity-laced “No!” He (under his Muslim name Amiri Baraka) — soon joined by Adrienne Kennedy, Suzan-Lori Parks, Ntozake Shange, Samm-Art Williams — created a body of work that transformed the white-bread art of theater all but overnight. White audiences got used to being provoked and harangued from the stage at least once a regional-theater subscription season; it was the price they paid for their humane convictions. But they didn’t have to like it.

When a Black play came along that let one feel sentimentally guilty rather than worked-over at curtain’s fall—Lorraine Hansberry’s Raisin in the Sun is the perfect example—audiences repaid the author with inordinate admiration.

Wilson’s unheralded appearance in 1984 arrived like a gentle shower in the desert. His plots were laced with frustrations and defeats for their predominantly Black characters, but their sufferings were presented as taking place in the bad old days, not in the street outside the theater. And they expressed those sufferings in a colorful stream of chat and invocation which occasionally rose to a kind of vernacular poetry. There were no expressionistic dramaturgical tricks to puzzle out the meaning of; just plain folk passing the time in familiar settings, living and partly living, just like us.

Best of all, we were promised not just one or two “sequels” but a full ten plays, one set in each decade of the 20th century, invoking the Black journey from accepted oppression to a painfully-won agency and self-liberation. Wilson was turned, long before he earned the title, into one of the finest playwrights of the 20th century.

I believe Wilson himself was utterly guiltless of posing as the grandiose icon of Black artistry his acolytes have made of him. His public voice, outside the theater, was unfailingly modest, moderate, earnest to a fault.

The best way of getting an impression of the man himself, his craft, his intentions, and his ambitions emerges in his own words in George Plimpton’s searching 2005 Paris Review interview. There we get the clear sense of a writer who knows exactly who he is and what he’s doing. Wilson says his first ambition was to be a poet, and that he still writes as a lyric poet does. He acknowledges writing in intermittent bursts of inspiration. He concedes his struggles to piece these fragments together in a smooth, plausible dramatic flow.

You will also get a hint of the detachment that made him a little enigmatic even to people who knew him personally. There are many photographs of Wilson smiling (or trying to smile), but more typically he’s captured gazing at something just out of frame, something that seems to concern him a little. This reflects his default mode around others: a bit guarded, emotions if any contained behind an impassive mask and anonymous presence.

This chronicler of a century of Black experience dressed like an associate professor of philosophy at Antioch or Reed. It was not even evident to a casual eye that he was Black, and he did nothing to signal Blackness. And—again from his own testimony—he, child of a white man who abandoned him and his Black mother when he was five—did not feel he was Black by nature. He had to learn to be Black, and his education, which began at the age of 20, with the discovery of Bessie Smith and the Blues, is the stuff he transformed with ever growing skill into the tissue of his work.

The setting of all his plays (with the exception of Ma Rainey) is the city of Pittsburgh, Wilson’s birthplace and where his first experiments in drama were staged. But the city itself seems to have had little effect on his development, apart from the schools he attended and dropped out of and the Carnegie Library where he educated himself and discovered the pioneer writers of Black America, Langston Hughes, Richard Wright, Ralph Ellison. He lived most of his adult life in notably white-bread towns like St. Paul, Minnesota and Seattle, where he continued to spend much of his time in coffee houses and taverns, listening to the conversations of regulars and making notes of what heard on napkins and coasters.

He married three times but his wives are barely part of his public record. He is universally remembered as a good collaborator and a patient teacher, but if he ever had a close friend and confidante, that person has not stepped forward to offer any insights into what went on in his head. Like many writers, his head was where he was at home, and the texts which issued from it are about other people’s emotions and experiences, not his own.

Wilson’s art doesn’t make its greatest impact in realistic, straight-ahead, start-here-and-go-there stagings like those directed by his first mentor Lloyd Richards, who set the template for later productions, in which disjunctions in the action are papered over and sudden changes of pace or direction in the action are de-emphasized or simply ignored.

Wolfe is of a later, more “hip” generation of Black theater artists and in his Ma Rainey sometimes takes advantage of one of Wilson’s discontinuities for a bit of  fancy cinematography and editing. But these moments are incidental to the usual cautious approach of a big-budget high-profile adaptation. They “open up” the show, emphasizing just how strictly contained the original play was, as shown in this Wikipedia synopsis:

In a Chicago recording studio, Ma Rainey’s band gathers to record a new album. As they wait for her to arrive they tell stories, joke, philosophize, and argue. . . . By the time Ma arrives, recording has fallen badly behind schedule . . . . Ma’s insistence that her stuttering nephew Sylvester speak the title song’s introduction wreaks further havoc. As the band waits for various technical problems to be solved . . . .

This is a remarkably accurate description of the play’s action, right up to the abrupt, rushed, and utterly unprepared catastrophe which ends it. And it indirectly offers a clue to the real atmosphere of Ma Rainey and all the more carefully constructed plays that followed. Ma Rainey is not “about” waiting, but waiting is its essential condition.

If you look for them, there are hints in Wolfe’s film that he’s aware that plain plodding realism is just the surface of the play. Many scenes play in uncomfortable close-up; the performers are often penned up or boxed in; time doesn’t flow smoothly, vigorous action soon peters out. If this sounds to you more like Samuel Beckett’s near-abstract evocations of stasis, isolation, and lack of affect, discontinuity than conventional story-telling, you have to key to Wilson’s talent. I’m not suggesting Beckett as an “influence” but as an affinity.

What seems pedestrian in his material (and there is a lot of that in a conventional staging) vanishes if the limits imposed by “realism” are tossed aside and the performers are cut loose to dance, to fly with the language — the arias and ensembles and manic word-jazz which grew ever richer as Wilson discovered his true metièr.

If you’re not familiar with Wilson’s work, Wolfe’s Ma Rainey is a long way from an ideal introduction. It’s too swaddled in quasi- and queasy-documentary, its transparent Best-Actor Oscar ambitions, its cast-of-thousands amplification of a piece of chamber music written for quartet with obbligato blues queen.

But the fractures are there, felt if not seen. It’s in these moments of discontinuity, when shards of thought and sensibility scrape jarringly past each other, that Ma Rainey really cuts loose and sings.

Roger Downey
Born in Canada moved to Peru's altiplano at the age of six; came to the U.S. at 10 to discover that you don't use your feet to dribble the ball. Learned from the git-go that "America" is an idea, not a place.
Previous article
The Star of Bethlehem and how It May Have Existed
Next article
Has Seattle Finally Found a Legal Way to Tax High-Earners?