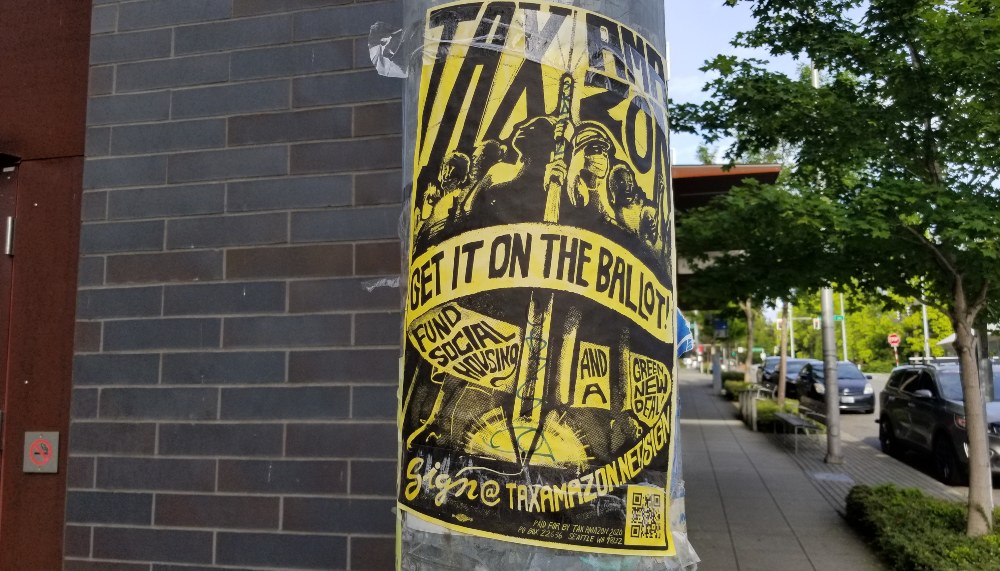 Has Seattle Finally Found a Legal Way to Tax High-Earners?

When asked why he robbed banks, Willy Sutton, a celebrity bank robber of the 1920s to 1950s,  allegedly said, “that’s where the money is.”

The Seattle City Council has been trying its damnedest to tax Amazon, tech companies, and their high-end employees for exactly the same reason.  The council is certainly looking in the right place: Amazon reported third-quarter revenues of $96 billion.  And Forbes recently reported that the founder of the company, Jeff Bezos, is the first person to amass more than $200 billion.

Unfortunately – the much-jailed Sutton could no doubt empathize – the Council’s earliest attempt fell afoul of the law.  That was the 2.25% income tax on high earners (individuals making more than a quarter-million dollars and couples making more than a half), which a superior court promptly tossed. A court of appeals also ruled against it, a ruling that the state supreme court let stand.

The next attempt was quickly scrapped in the face of superior political force.  That was the employee head tax that the council passed in 2018 – and then, under fierce opposition from Seattle businesses and on the eve of opponents’ filing a referendum, promptly repealed the tax.

Now, the Council has come up with a tax on payrolls of companies with more than $7 million in annual sales, based on the numbers of high earners on their books, with a special high rate for Amazon.  This one faces a legal challenge, too.  The Seattle Metropolitan Chamber of Commerce has filed a complaint in King County Superior Court, alleging that the new measure is an unconstitutional “tax on the right to earn a living.”

Seattle’s latest attempt at a payroll tax fits into the long –  and remarkably unsuccessful – saga of attempts to give Washington a more “progressive” tax system. The state’s tax system is often called “regressive.” Washington is one of only seven states without an income tax.  (Two more states tax only interest and dividend income.) And, of course, it relies heavily on a regressive sales tax.

Things were almost very different. In the Depression, when farmers were paying property taxes on large tracts of land that weren’t making them any money.  They naturally wanted to shift the tax burden to someone else.  The farm organization the Grange pushed an initiative to limit property tax rates and make up the revenue with a graduated income tax.  In 1932, the people voted for it.  Yes, they actually passed an income tax.  To fill the revenue gap until the tax went into effect, the legislature passed the widely ridiculed business and occupation tax which is still with us.  Naturally, the initiative was challenged in court.  Where it lost. So the legislature kept the B&O tax and quickly imposed a tax on retail sales.

In tossing out that 1932 income tax, the state supreme court ruled that income was a form of property, and since the constitution required every class of property to be taxed equally, a graduated income tax was unconstitutional.

The idea that the court might reconsider its 1933 ruling wasn’t totally implausible.  In a 1993 law review article, University of Washington constitutional law professor Hugh Spitzer argued that the court had misconstrued its main precedent and that, in any case, the decisions that underpinned the ruling had since been overturned.

Since 1933, a couple of legislative attempts to tax income have failed in the courts.  And numerous attempts to amend the constitution by initiative have failed badly at the polls. The last attempt, 2010’s Initiative 1098, for which the late Bill Gates, Sr. acted as the face and chief spokesperson, was roundly rejected by voters.  It would have amended the constitution to allow taxing the incomes of individuals making over $200,000 a year and couples making over $400,000.  The “no” vote hit 64 percent. Voters evidently worried that sooner or later, those limits would be removed, and their own taxes would go up.

Seattle lawmakers took a gamble, hoping that the courts would reconsider the 1933 ruling and allow its proposed high-earner tax to stand.  But the appeals court basically said that was above its pay grade, and the supreme court didn’t take the bait.

The appeals-court judges in the Seattle challenge reasoned that since that 1933 decision defined income as property and since the legislature has given cities the right to tax property, there’s no constitutional reason why Seattle can’t tax income.  However, a 1984 statute said explicitly that cities can’t tax net income.  But that statute violated the constitutional rule that legislation can’t address more than one subject.  Therefore there is no statutory reason why Seattle can’t tax income.  (Single-subject bills that would have restored the ban on city income taxes were introduced in the last legislative session, but they went nowhere.  The same thing will probably happen next time around.)

As a result of these legal decisions, the 1933 ruling against a graduated income tax still stands, and only the state supreme court can rule otherwise.  Therefore, the Seattle tax —  which would have been 2.25% for high earners and 0% for everyone else — was unconstitutional.

The Chamber’s complaint to the latest Seattle attempt to legislate a high-earner payroll tax and its press release about the suit both characterize the payroll tax as a “tax on the right to earn a living.”  That’s a pretty good phrase.  It seems based on the facts in  Cary v. Bellingham, a 1952 state supreme court ruling cited in the Chamber’s complaint.  Cary concerned  a tax imposed in 1951 by the city of Bellingham.  The city had said basically that anyone who wanted to earn money in Bellingham had to buy a license.  (What was happening in Bellingham in the late Truman years?) The court didn’t buy it, saying that the tax “is, in effect, a license based upon the assumed power of the municipality to control the right to work for wages. The municipality has no such power.“

Applied to Cary, the phrase was clearly apt. Applied to the Seattle payroll tax, it doesn’t seem apt at all.  The city’s payroll tax will fall on the payers, not the recipients, of income.  The ordinance says explicitly that a company may not take the tax out of an employee’s wages.

Still, as critics argued about the effort to tax companies on the basis of how many people they employed, if you tax people for hiring people, they may hire fewer. That’s a plausible argument.  The Chamber has applied it to the payroll tax, too.  Alicia Teel, the Chamber’s senior vice president of public affairs and communications, has said that the City Council “is producing policies that discourage investment in one of the most diverse economies in the world and limits Seattle’s extraordinary potential.”  Which may be true.  But again, the city would be doing so by taxing the employer, not the employee.

The Council may finally have found a clear path to some of that corporate money. No one knows exactly how the new-found cash would be spent, once the ordinance finished its passage through the courts, which will touch off political struggles. Legally, however, this time around passage through the recalcitrant courts looks like a pretty good bet.

Dan Chasan
Previous article
‘Ma Rainey’ and the Playwright’s Artistic Journey: Learning to be Black
Next article
The Audacity of Hope… in a Thousand College Admission Essays